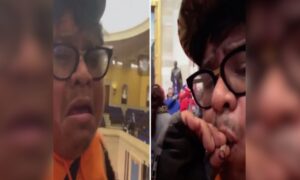 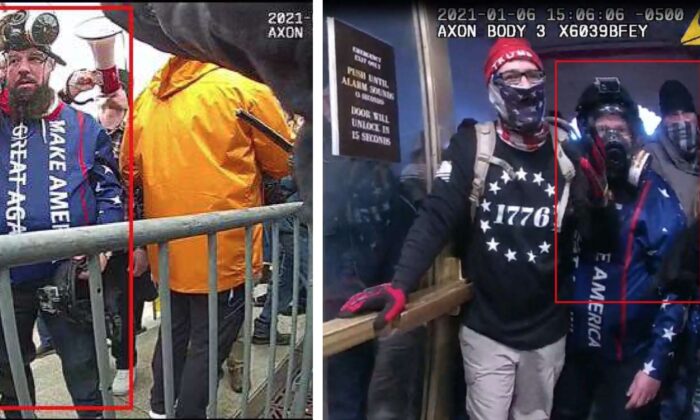 Stills from police body-worn camera video footage allegedly showing Christopher Quaglin (with a red box around him) at the U.S. Capitol in Washington, on Jan. 6, 2021. Quaglin was arrested on April 6, 2021. (Department of Justice)
Crime and Incidents

A New Jersey man was arrested on April 7 in connection with the Jan. 6 the Capitol incident, with federal prosecutors accusing him of assaulting multiple law enforcement officers, spraying them with a chemical irritant, and stealing their riot shields.

Christopher Joseph Quaglin, of New Brunswick, New Jersey, was arrested on Wednesday and is facing charges of assaulting, resisting or impeding officers, civil disorder, and obstruction of an official proceeding, according to the Department of Justice (DOJ).

Quaglin, who was charged with a criminal complaint (pdf) and made an initial court appearance on Wednesday, allegedly assaulted several U.S. Capitol Police (USCP) and Metropolitan Police Department (MPD) officers during the Jan. 6 Stop the Steal protest.

“According to court documents and publicly available video, Quaglin was seen repeatedly assaulting multiple law enforcement officers guarding and protecting the Capitol from rioters,” the DOJ said in a statement.

An FBI agent detailed the evidence against Quaglin in a 26-page affidavit (pdf), which shows him in numerous stills from security footage wearing a distinctive red, white and blue shirt with the words “Make America Great Again” on it, as well as a black helmet with a camera affixed to it, and a gas mask.

The agent wrote in the affidavit that, in one incident, Quaglin allegedly approached a police line separated by a fence and started engaging with the MPD officers manning the line.

“Seemingly unprovoked, QUAGLIN shouts the following statements towards the MPD Officers: ‘You don’t want this fight. You do not want this [expletive] fight. You are on the wrong [expletive] side,” the agent wrote.

In another incident described in the affidavit, Quaglin allegedly approached a USCP officer, before holding and pushing the officer by the neck, causing the officer to fall. He also appeared to “physically strike” a USCP officer in video footage, and later he could also “be seen on video attacking officers with a stolen riot shield and spraying them with a chemical irritant.”

The DOJ alleged in a statement that Quaglin sprayed chemical irritant “directly into the face of an MPD officer who was not wearing a face shield or gas mask.”

Hundreds of people have been charged in connection with the Capitol breach, which took place as Congress assembled to count electoral votes cast in the 2020 presidential election.