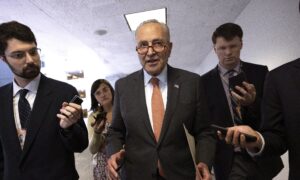 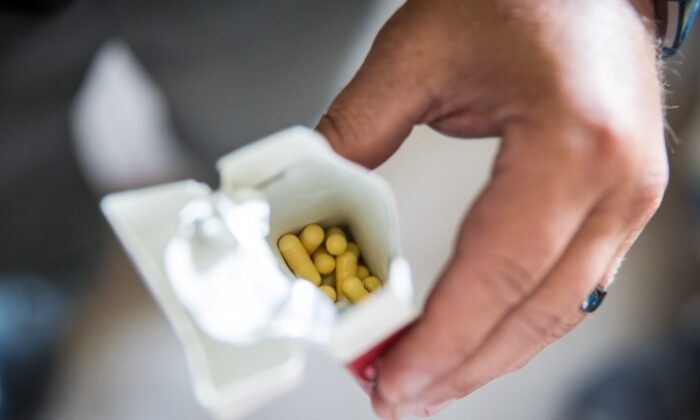 A cigarette box of pills that was found with two people in an abandoned home in Dayton, Ohio, is seen in a Aug. 3, 2017, file photograph. (Benjamin Chasteen/The Epoch Times)
Congress

A bipartisan bill introduced in the Senate is aimed at fighting the opioid epidemic in rural areas of the United States.

Among the provisions are codifying a Department of Justice program that provides grants to rural communities to help them combat opioid overdoses; shifting some of the federal funding from the Omnibus Crime Control and Safe Streets Act of 1968 to rural areas; and examining gaps in prevention, treatment, and recovery services for people who are caught up with the law.

“Like so many Georgians, I’ve lost friends to the opioid epidemic. My bipartisan bill with Senator Grassley will fund efforts in rural communities to prevent and treat addiction and to save lives,” Ossoff, a freshman senator from Georgia, said in a statement.

Grassley added: “We’ve made some progress in fighting the opioid crisis, but with overdose deaths rising, Congress needs to act. Our bill will help communities in Iowa and across the country to prevent and handle any surge in opioid overdoses. I look forward to working to pass this bipartisan legislation and preventing more Americans from falling victim to addiction, including those individuals in the criminal justice system.”

Reps. Conor Lamb (D-Pa.) and Randy Feenstra (R-Iowa) introduced a companion bill in the House of Representatives earlier this year. The bipartisan support in both legislative chambers signals that the bill may be approved by the closely divided Congress.

Americans have struggled for years with opioids, a class of drugs typically prescribed as painkillers. Heroin, which is illegal, and synthetic prescription drugs such as oxycodone are opioids.

A surge in drug overdose deaths in 2020 was primarily attributed to opioids. They were found to be a factor in approximately three-quarters of the 93,331 estimated deaths.

Researchers have found that the harsh rules imposed during the COVID-19 pandemic led to higher deaths, including more drug overdose fatalities.

The new measure has the support of the National Rural Health Association, the Small & Rural Law Enforcement Executives Association, and Faces & Voices of Recovery.

“We urge Congress to enact the Rural Area Opioid Prevention Program Act to sustain the vital efforts to reduce overdose in high-risk rural areas and create opportunities for more individuals and families to achieve long-term recovery from addiction,” Patty McCarthy, CEO of Faces & Voices of Recovery, said in a statement.