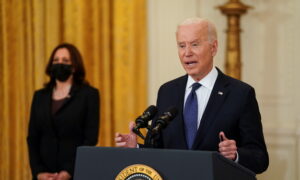 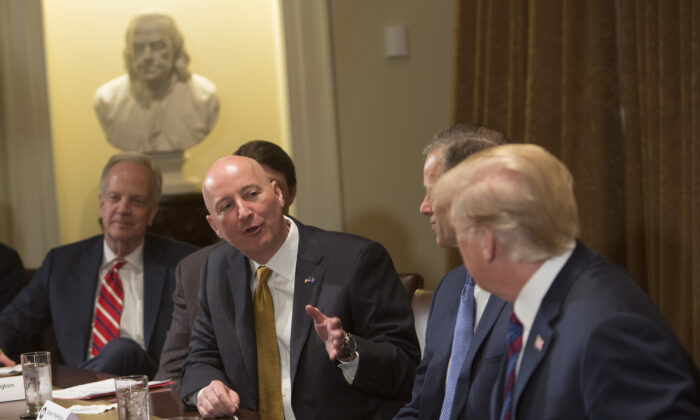 Nebraska Gov. Pete Ricketts speaks to then-President Donald Trump during a meeting on trade with governors and members of Congress at the White House in Washington on April 12, 2018. (Chris Kleponis - Pool/Getty Images)
Regional News

Nebraska will send state troopers to the U.S.–Mexico border to aid law enforcement after the governors of Arizona and Texas requested help from other states amid a surge of people crossing the border illegally, Gov. Pete Ricketts announced.

Ricketts, a Republican, appears to be the second governor to assist after Florida Gov. Ron DeSantis said he would deploy troopers and other law enforcement officials from his state to the border.

“Nebraska is stepping up to help Texas respond to the ongoing crisis on their border with Mexico,” Ricketts said in a June 19 statement. “The disastrous policies of the Biden-Harris Administration created an immigration crisis on the border. While the federal government has fallen short in its response, Nebraska is happy to step up to provide assistance to Texas as they work to protect their communities and keep people safe.”

About 25 Nebraska state troopers will head to Del Rio, Texas, to assist the Texas Department of Public Safety to provide law enforcement support. The Del Rio Border Patrol sector in recent months has seen a significant surge of illegal aliens who typically try to cross the Rio Grande—the river that serves as a natural border between the United States and Mexico.

Texas Gov. Greg Abbott and Arizona Gov. Doug Ducey, both Republicans, sent requests for border assistance earlier this month. They cited the throngs of people surging across their borders, including drug smugglers and those with criminal records.

“Given the staggering number of violations now occurring in Texas and Arizona, additional manpower is needed from any state that can spare it. With your help, we can apprehend more of these perpetrators of state and federal crimes, before they can cause problems in your state,” the governors wrote in the letter.

The two governors said that the out-of-state law enforcement personnel will have more significant policing abilities than normal officers or the National Guard members who have been periodically deployed along the border.

Typically, only federal Border Patrol or Immigration and Customs Enforcement (ICE) officers can detain individuals for immigration offenses. To circumvent this, Abbott and Ducey said they declared a disaster and an emergency, respectively, to allow state police to make arrests in their states.

Ricketts said the troopers will be sent to Del Rio later this month and won’t be there for more than 16 days.

“We’re here today because we have problems in Florida that are not organic to Florida that we’ve been forced to deal [with] over many years, but particularly over the last six months, because of the failure of the Biden administration to secure our southern border,” DeSantis said on June 16. “And, indeed, to really do anything constructive about what is going on in the southern border.”

Border Patrol will continue “to leverage our longstanding relationships with state and local law enforcement, including deconflicting operations in the border region and responding to call-outs from other law enforcement agencies,” a Department of Homeland Security spokesman told The Epoch Times on June 21.