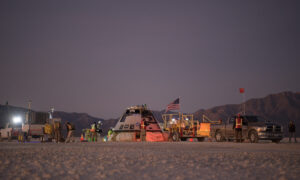 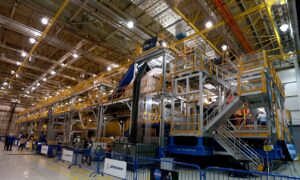 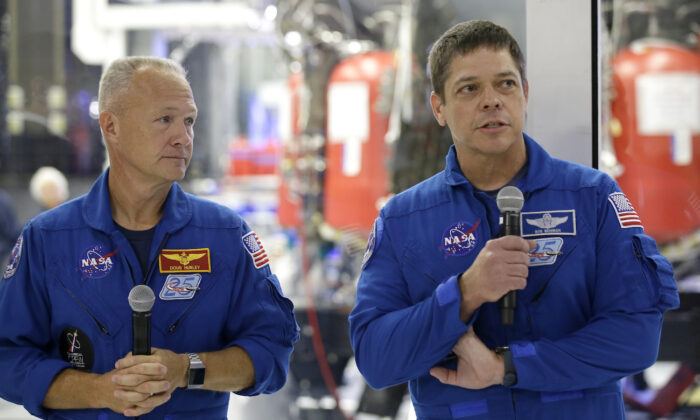 NASA astronauts Bob Behnken, right, with Doug Hurley talk to the media in front of the Crew Dragon spacecraft, about the progress to fly astronauts to and from the International Space Station, from American soil, as part of the agency’s commercial crew program at SpaceX headquarters, in Hawthorne, Calif., on Oct. 10, 2019. (Alex Gallardo/AP Photo)
Space

NASA announced that it has scheduled its first astronaut mission from U.S. soil in almost a decade for May 27.

“On May 27, NASA will once again launch American astronauts on American rockets from American soil!” NASA Administrator Jim Bridenstine posted April 17 on Twitter.

Learn more about the mission: https://t.co/z6aPUkUJ37

NASA astronauts Robert Behnken, 48, and Douglas Hurley, 52, will fly aboard SpaceX’s Crew Dragon spacecraft to the International Space Station for an “extended stay,” the agency announced.

The spacecraft is scheduled to lift off atop SpaceX’s Falcon 9 rocket from Launch Complex 39A in Florida—the same Kennedy Space Center launchpad that was used by the shuttle Atlantis in July 2011, which was the final mission of the space shuttle program.

Hurley was a pilot on that last shuttle mission. He’ll serve as the spacecraft commander in the upcoming mission.

Astronauts have not launched into orbit from the United States since NASA’s space shuttle program was retired in 2011. Since then, the United States has been paying Russia to carry astronauts to the space station, while private companies such as SpaceX have been developing space travel and related technologies.

Elon Musk’s SpaceX in 2012 became the first private company to transport cargo to the space station. At the time, SpaceX said it could transport an astronaut to the Space Station for $20 million compared to $70 million for a trip on Russia’s Soyuz spacecraft, The Guardian reported.

Only Russia, followed by the United States, then China, have launched humans into orbit since 1961. The latest mission, should all go to plan, would make SpaceX, which was founded 18 years ago, the first private company to do so.

The latest mission is called “Demo-2” because it’s the second time that SpaceX is launching its Crew Dragon spacecraft to the ISS.

If all goes as planned, the mission will be the final test flight for the Crew Dragon before NASA certifies the craft for the agency’s Commercial Crew Program, a public-private initiative for regular manned flights to the space station.

“This certification and regular operation of Crew Dragon will enable NASA to continue the important research and technology investigations taking place onboard the station, which benefits people on Earth and lays the groundwork for future exploration of the Moon and Mars starting with the agency’s Artemis program, which will land the first woman and the next man on the lunar surface in 2024,” NASA said on its website.

Boeing, a SpaceX competitor, has been developing its Starliner capsule, also under NASA’s commercial crew program. The company in December 2019 aborted its test flight after the Starliner capsule failed to reach the space station.

NASA is reviewing how long Behnken and Hurley need to stay aboard the space station to ensure a continuous presence by U.S. astronauts on the station. The time frame could range from a week, as originally planned, to up to six months.

Timelines for the crew program have been pushed back by years; the first crew launch was originally slated for early 2017.

The development delays with Crew Dragon and Boeing’s Starliner have forced NASA to buy more crew seats from Russia’s space agency. NASA is in the process of buying another seat on a Russian rocket. Russian Soyuz capsules have been the sole means of crew transportation to and from the space station since 2011.

SpaceX has been using Falcon 9 rockets to launch cargo to the space station in the company’s original Dragon capsules since 2012. NASA turned to private companies for deliveries once the shuttle program ended.