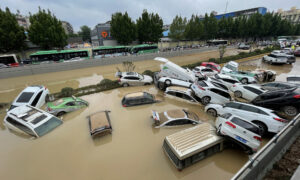 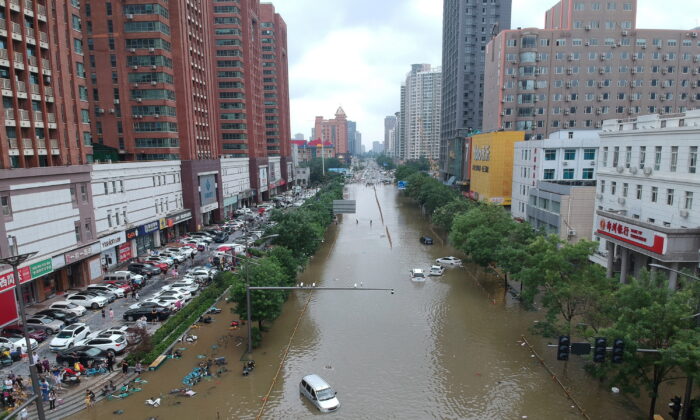 A flooded section of road in Zhengzhou, Henan Province, China, on July 21, 2021. Picture taken with a drone. (China Daily via Reuters)
Chinese Regime

Lu Yanghan, who is about 5 feet, 4 inches tall, had been sheltering in their second-floor home in Cuimiao Town when she was washed away by the floods, Lu’s mother told The Epoch Times in an interview. The town is about a 40-minute drive west of Henan’s provincial capital, Zhengzhou.

“On July 20, there were heavy rains,” Lu’s mother said. “The floods reached the third floor of our building. My daughter was alone in our second-floor home before she was swept away.”

She said her neighborhood was badly hit by floods, and many houses had been damaged as streets turned into rivers.

Zhengzhou, with a population of 12 million, has been one of the worst-hit areas since heavy rains began to fall in the region on July 17. Over the next four days, the city received 617.1 millimeters (24.3 inches) of rainfall, which is almost equivalent to the annual average of 640.8 millimeters (25.2 inches).

Troubling images and videos of people being swept away or drowning in the floodwaters have emerged online, some related to a tragedy on July 20 when Chinese officials claimed that at least 12 people died inside an inundated metro line in Zhengzhou, after authorities said they evacuated more than 500 trapped commuters.

Lu’s mother attributed the floods to the poor drainage system in her area.

Hundreds of thousands of people have been forced to relocate as a result of the floods, including Lu’s mother, who is now staying with a relative.

Lu is hardly the only missing person due to the floods. China’s state-run media have published missing people reports, and families have taken to China’s social media seeking the whereabouts of their missing relatives.

Another missing person is 32-year-old Li Li, who is nine months pregnant. According to local media, she was thought to have been at her home in the town of Baisha on the morning of July 20 before she went missing. Baisha is about 10 miles east of Zhengzhou.

In late afternoon on July 24, China’s state-run media Xinhua announced that 58 people had died in the rain-ravaged province. However, Wang Ying, a Henan resident, questioned the official statistics in an interview with The Epoch Times.

He said he expects official announcements on the deaths at different locations, but that the deaths wouldn’t add up to the true death toll. This includes deaths in the underground metro and in the Jingguang Road Tunnel—an underpass in Zhengzhou that was also flooded on July 20, which China’s state-run media reported had trapped hundreds of vehicles inside.

The flood wasn’t a natural disaster, Wang said, but a man-made disaster, because Chinese officials failed to issue public announcements before discharging water from overflowing reservoirs. The Chinese regime has blamed the floods on “once in a thousand years rains.”

Local authorities began discharging water from the Changzhuang Reservoir, which sits upstream from Zhengzhou, at around 10:30 a.m. local time on July 20. Hours later, Henan’s capital was inundated, but the public announcement on the discharge wasn’t released until the early hours of July 21.

Wang Dejia, an online writer who goes by the pen name Jing Chu, told The Epoch Times that the actual number of deaths and missing persons will be a mystery.

To the Chinese regime, “it is not so much about rescue efforts, it is more about imposing an information lockdown, and the importance of people’s lives is trivial,” the writer said.

Li Yun contributed to this report.