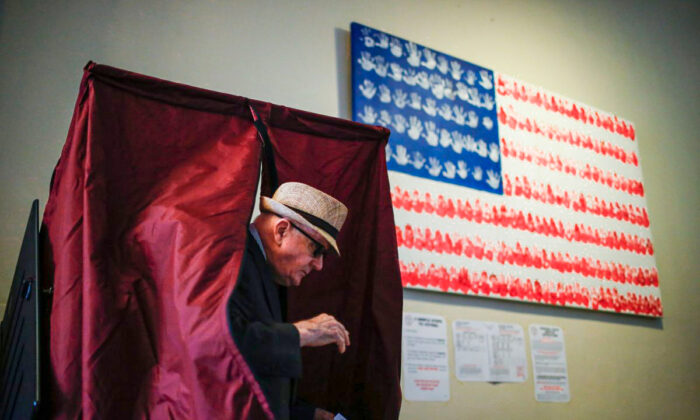 New Jersey voter registration records contain more than 8,200 duplicate names, making it possible for one person to cast two ballots, plus another 61 triplicate registrations, seven quadruplicates, three pentaplicates, and one sextuplicate, according to the Public Interest Legal Foundation (PILF).

“New Jersey’s voter registration system, like nearly every other studied by PILF, can be tricked into registering a person multiple times with extremely similar biographical data inputs at the same addresses,” states the PILF analysis published on June 6.

“These serve as an administrative challenge to be resolved as we see more automation to vote-by-mail. Otherwise, ‘John Public’ and ‘John Q. Public’ could each vote once, while the actual John is voting twice.

“The most common finding error type, clerical/typographical error, can be as subtle as transposed letters. As an example, Julia Rose and Juila Rose are the same person, but she has duplicate registrations with unique voter identification numbers.”

The Virginia-based PILF alerted the New Jersey Secretary of State to the problems uncovered by the firm’s analysis of the voter rolls, which was only made possible by a federal court suit.

“Tens of thousands of other voter records were highlighted for missing or fictitious biographical information like dates of birth. These represent current and future problems with voter roll list maintenance that the Garden State needs to address,” the report states.

“To get to the root of the problems, PILF also filed a federal lawsuit to access copies of list maintenance procedural guides after the NJSOS denied requests for fear of hacking risks.”

Other registration problems uncovered by PILF in the New Jersey rolls include nearly 2,400 individuals listed as active voters whose birthdays make them more than 100 years old.

“There are 2,398 registrants showing dates of birth in 1917 or before across New Jersey. Given that the most recent average life expectancy data show to be 80.7 years in the state, the thousands of registrants aged well beyond 100 years deserve closer examination,” the report states.

“New Jersey has some explaining to do in how it collects and maintains basic voter information. As we have already demonstrated, PILF will pursue available remedies to correct often long neglected government records,” PILF President J. Christian Adams states in the report.

Earlier this year, PILF reported similar problems in the voter rolls of Arizona and North Carolina, as well as the fact that 44o,000 mail-in ballots went missing or were rejected as undeliverable in Pennsylvania in 2020 and there were 27,000 uncounted mail ballots in Georgia in 2020. President Joe Biden carried Pennsylvania by 81,000 votes and Georgia by 11,000 votes.

In September 2020, PILF released an analysis of the voter registration rolls of 42 states that identified nearly 350,000 dead registered voters still on the rolls in 41 states, with more than half of those in just five states, New York, Texas, California, Michigan, and Florida.

The analysis also identified nearly 44,000 duplicate registrants who appeared to have voted twice in 2016 and another nearly 38,000 in the 2018 balloting. Tens of thousands of the duplicate votes were with mail-in ballots, according to PILF.

The PILF analysis was done using the firm’s Safeguarding America’s Votes and Elections database, which it describes as having “comparison capabilities against itself and against other useful data sources like the Social Security Death Index … It can identify deceased and duplicate voters. It can identify registrations at ineligible addresses like post office boxes or mailbox stores, and even people registered in multiple states simultaneously.”

The New Jersey report follows the release of “2000 Mules,” a documentary produced by Dinesh D’Souza, a conservative columnist and cinematic producer. The D’Souza documentary looks at how legions of left-wing political activists made innumerable deposits of drop-off ballots during the 2020 election.

At least one state, Georgia, has issued subpoenas to hundreds of individuals who served as mules, as described by the D’Souza production. And an Arizona sheriff who was featured in the documentary has opened an investigation that has to date produced 16 open cases.