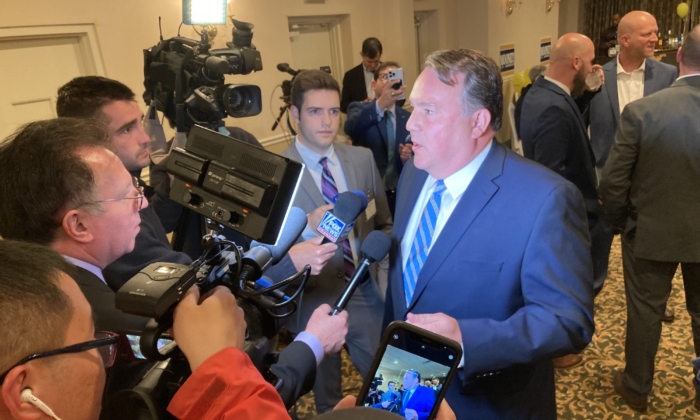 Rep. Alex Mooney (R-W.V.) after winning the GOP Congressional primary in his district on May 10, 2022. (John Haughey/Epoch Times)
2022 Midterm Elections

HARPERS FERRY, West Virginia—Two Republican incumbents spent six months and more than $6 million trying to out-Trump each other but, in the end, only one got the former president’s endorsement and that proved to be the difference.

With 67 percent of the districts reporting at 8:56 p.m., Mooney received 50.25 percent of the vote to McKinley’s 39.59 percent, according to Decision Desk HQ.

Mooney, 50, first elected to Congress in 2014, drew Trump’s endorsement as “a proud America First conservative” because he voted against President Joe Biden’s Build Back Better infrastructure bill and against a bill to create a bipartisan commission to investigate the Jan. 6 attack on the U.S. Capitol.

Before about 200 supporters at the Clarion Inn near Harper’s Ferry, Mooney thanked his family, campaign staff, voters, and “my no. 1 volunteer,” his mother, Lala Suarez Mooney, who turns 81 on Thursday.

He thanked McKinley “for his good work representing our state.” He emphasized “our” in response to McKinley’s claim that he is a carpetbagger.

When reapportionment left him and McKinley running for the same seat, he knew he was the underdog because the newly redrawn CD 2 was “two-thirds (McKinley’s) constituency and one-third mine. They said it couldn’t be done” like when he defeated six fellow Republicans in the 2014 primary and nudged Democrat Nick Casey, 49 percent to 47 percent to become the first Hispanic elected to West Virginia’s congressional delegation.

Mooney Campaign Manager Teemu Garrity said the candidate did not rest on his laurels after receiving Trump’s endorsement.

“He ran an old-school campaign. He put in the work, going door-to-door in all 27 counties (in CD 2), meeting with local officials and citizens,” Garrity said.

Garrity said the McKinley’s infrastructure and Jan. 6 commission votes were key with voters.

“Beyond that,” he said, “this is a changing state and the way the new districts are drawn, (CD 2) is a new territory” that no longer resembles the district and state that Democrats dominated until recently for more than a century.

Mooney called U.S. Sen. Joe Manchin—West Virginia’s only statewide elected Democrat—“arrogant” for endorsing McKinley in the race, noting the two-term senator and former governor targeted his campaign in 2013 when he was first elected to Congress.

Manchin was among “special interests” that tried to derail his reelection but voters weren’t fooled, Mooney said.

Mooney said Manchin is now the one whose political fortunes are at risk when he seeks reelection in 2024. “The real threat to Manchin and people like him are the voters of West Virginia,” he said. “I’m 2-0 against him. Maybe I should make it 3-0.”

“Congressman Mooney is a conservative warrior,” Trump said in his November endorsement, calling McKinley “a RINO [Republican In Name Only] who supported the ‘Unfrastructure Bill’ and the ‘Sham Jan. 6 Unselect Committee.'”

That endorsement resonated with Republican voters. When Trump backed Mooney in November, he was trailing McKinley by 15 to 20 percentage points in the polls. By late April, polls indicated Mooney had turned the tables and was up by 15 percentage points.

McKinley, 75, a former state Republican Party Committee chair who unsuccessfully ran for governor in 1996, has served in Congress since 2010, winning a seat occupied by Democrats since 1968.

Mooney is not expected to be significantly challenged in November’s general election by Democrat Angela Dwyer, a security operations manager and mother of seven who defeated  Barry Wendell of Morgantown in the CD 2 primary.

McKinley and Mooney were left vying for the same seat after West Virginia lost one of its congressional districts in post-2020 Census reapportionment.