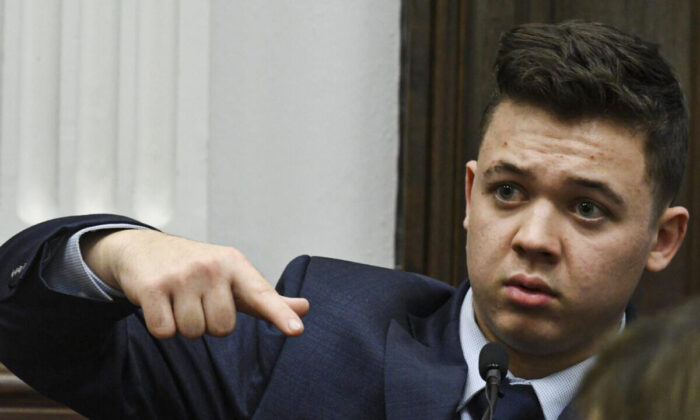 Kyle Rittenhouse testifies about Gaige Grosskreutz holding a gun toward him during cross examination in his trial at the Kenosha County Courthouse in Kenosha, Wis., on Nov. 10, 2021. (Mark Hertzberg /Pool Photo via AP)
US News

These are three examples of false information being spread about Rittenhouse, whose trial ended last week with his acquittal.

Prominent influencers, including lawmakers and reporters, are sources of some of the misinformation—possibly disinformation—leaving experts troubled.

Rittenhouse, 17 years old at the time, shot three men, two fatally, with an AR-15 in Kenosha, Wisconsin, on Aug. 25, 2020. All were white, as is Rittenhouse. The gun was bought by a friend and was picked up by the teenager, who resided in Illinois, from a home in Kenosha.

Rittenhouse claimed self-defense and the jury agreed, clearing him of all charges after video footage and witness testimony during the trial showed he was attacked by all of the men he shot.

“As soon as the Rittenhouse situation happened in Kenosha, the establishment media immediately created a narrative that would work with their particular, preferred narrative. As we now know, that led to a good many mischaracterizations and errors at that time,” Jeffrey McCall, a communications professor at DePauw University, told The Epoch Times in an email.

“By now, those media outlets are so committed to that narrative that they can’t drag themselves to correct previous errors or provide accurate details today. This not only reflects that some media outlets work with predetermined, ideological narratives, but that they are also too lazy to report facts as provided in the actual trial,” he wrote.

Ryan Chittum, a former journalist, and media critic with the Columbia Journalism Review, said some of the legacy news outlets have done excellent journalism on the Rittenhouse case, including the New Yorker, “but it’s been like a few drops in a firehouse of tendentious, false, and often malicious press coverage intended to fit an ideological narrative.”

“On balance, the press has been a destructive force on this story, from its beginnings in the coverage of the Jacob Blake shooting that set the whole thing off and which we know was justified, to the downplaying of the $50 million in destruction done by rioters in Kenosha, to the libelous portrayal of Rittenhouse and the particulars of what happened,” he told The Epoch Times in a Twitter message.

“There have been innumerable journalistic disasters in the Trump era, but this is the most blatantly reckless one of them all.”

Rittenhouse shot the men during riots that followed a police officer shooting Jacob Blake in the same city.

Blake was armed with a knife. Video footage showed he resisted arrest after visiting the home of an ex-girlfriend who had previously accused him of sexual assault. Prosecutors decided not to charge the officer in January because he appeared to act in self-defense and the Department of Justice last month announced it was closing a probe and filing no charges. The sexual assault charge was dropped last year.

Blake survived the shooting, although he is partially paralyzed. Some people falsely said last week that he died, including ESPN’s Jalen Rose and ABC’s Terry Moran.

“I misspoke and quickly corrected myself, on the air, as soon as I could. I apologize for the error,” Moran wrote on Twitter.

Rep. Sean Patrick Maloney (D-N.Y.), the chair of the Democratic Congressional Campaign Committee, claimed Blake died and that he was unarmed. The committee later sent out an updated statement from Maloney. “Apologies,” Chris Hayden, its communication director, wrote on Twitter.

The Maloney statement stands out to Jeffrey Blevins, a professor in the University of Cincinnati’s Department of Journalism, who is working on a book about how misinformation is spread.

“I think a lot of times the political left tend to think that false information, fake news, misinformation, is something that is only attributable to the political right. And that’s just simply not the case,” Blevins told The Epoch Times.

While people with small followings may put forth misinformation, much more damage is done when higher-profile influencers such as lawmakers do.

“When we think about influencers—and politicians fit into this category, certainly the chair of the Democratic Congressional Campaign Committee—their official account would be seen as a credible source,” he said. “When they put something out like this, it tends to stick with people’s minds.”

The false claims have had the potential to reach tens of millions of people on Twitter, where they were spread far and wide. The ESPN, CBS, CNN, and ABC shows combined have millions of viewers.

Among those falling prey to misinformation or dubious claims were two professors who have been cited by media outlets as experts in identifying it.

Lisa Fazio, a Vanderbilt psychology professor, shared a video of Amber Ruffin, who has her own show on NBC, making multiple false or evidence-free claims, including the assertion that Rittenhouse brought a rifle across state lines. That video has been watched more than 7.7 million times since Nov. 19, boosted by the likes of Rep. Ilhan Omar (D-Minn.).

Shannon McGregor, a professor at the Hussman School of Journalism and Media at the University of North Carolina–Chapel Hill, shared a tweet that called Rittenhouse “openly white supremacist,” a claim that has no evidence supporting it.

Blevins said the situation reminds him of what happened in 2019, when a brief, tightly edited video clip from Washington was disseminated widely by media and others.

Nick Sandmann, a Kentucky high school student, was in the nation’s capital with classmates. The clip was used to falsely state Sandmann confronted a Native American, Nathan Phillips, but video footage that later emerged showed the exact opposite was the case. Many media outlets issued corrections, and some paid Sandmann to settle defamation lawsuits.

The person who initially posted the clip had a small following, but it was widely spread, Blevins noted.

“People seem to be so eager to bring their hot take to social media, which is probably what happened in this case, and then you miss important pieces of context, and it can really do some damage,” he said.

Blevins encouraged people to be more cautious, recalling what he did when the clip initially emerged. He waited, instead of sharing it or posting about it, knowing that in the past, unconfirmed material was spread wildly but was later shown to be incorrect.