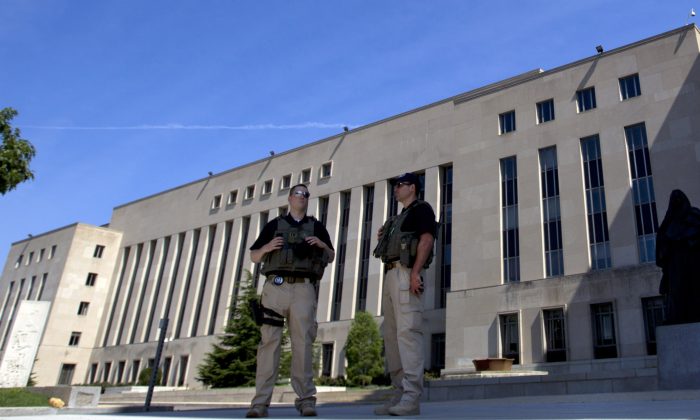 MINNEAPOLIS—A Minnesota man who is accused of joining the ISIS terrorist group in Syria has been returned to the United States to face terrorism charges.

Abdelhamid Al-Madioum made his first court appearance in U.S. District Court in Minnesota on Wednesday. Authorities say he was vacationing with his family in Morocco in 2015 when he secretly booked a flight to Istanbul, Turkey, and then traveled to Syria. He’s charged with providing material support to a foreign terrorist organization.

Al-Madioum was recently in a prison in northern Syria with alleged ISIS fighters, according to news reports.

A search warrant affidavit unsealed in 2017 says Al-Madioum, who was 18 when he left for Syria, is a native of Morocco and a naturalized U.S. citizen. He began studying computer science at Normandale Community College in Bloomington in 2014.

In June 2015, Al-Madioum and his family traveled to Morocco for a two-month vacation to visit relatives. But on July 7, 2015, Al-Madioum skipped dinner saying he wasn’t feeling well, and the next day, he was gone. He left everything behind except for his cellphone and passport, according to the search warrant affidavit.

Al-Madioum’s family told the FBI that he called them shortly after they returned to the United States and said he was working in a hospital in Mosul, Iraq, which was then under IS control. But a member of the FBI’s joint terrorism task force wrote in the affidavit that new recruits commonly misinform loved ones about their actual locations and activities so as not to cause distress.

The FBI searched Al-Madioum’s home in 2015 and found handwritten notes that indicated he had been planning to go to Syria, including how he could route money through various accounts, a rehearsed backstory in case he was stopped, and alternative travel ideas if his plans to go to Istanbul were thwarted. The notes also contained a sketch of an image that appears on a flag associated with IS, with the Arabic word for “allegiance” written next to it.

Speaking to CBS News from the Syrian prison in 2019, Al-Madioum said he was recruited to ISIS through a Twitter contact and had watched propaganda videos that showed IS members helping Muslims. He said he never fought for the group but had hopes of becoming a doctor.

“They gave me a blank check to buy whatever I wanted,” said Al-Madioum, who claimed to have lost his arm in a U.S. airstrike.