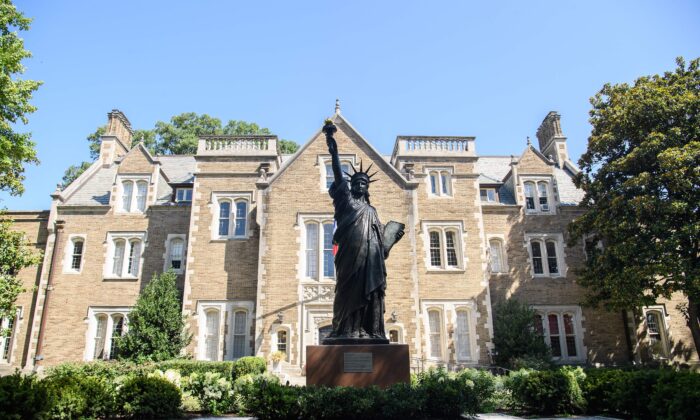 A three-meter replica of the Statue of Liberty is unveiled at the residence of the French Ambassador to the United States in Washington, on July 13, 2021. (Nicholas Kamm/AFP via Getty Images)
US

Mini ‘Lady Liberty’ Comes to Washington for Next Decade

A replica of the Statue of Liberty, which’s being called the “little sister”, now sits in a lush garden in Washington, arriving in time for France’s Bastille Day celebration on July 14.

The statue was unveiled Wednesday at The Embassy of France in the United States.

The bronze beauty is smaller but based on the original plaster cast of its big sister on Ellis Island, a gift from France.

“It’s a powerful reminder of what freedom means for our nations and also all the core values of our democracies,” says Philippe Etienne, Ambassador of France to the United States

The nearly 3-meter-high (10-feet-high) bronze made a nine-day trip across the Atlantic Ocean this month, sailing out aboard a container ship from the French port of Le Havre to Baltimore. It was transported to Ellis Island for the July 4 celebrations.

The monumental Statue of Liberty in New York harbor, by sculptor Auguste Bartholdi, symbolizes the United States’ welcoming to its shores of immigrants seeking refuge and freedom. It also serves as a monument to French-American friendship.

The mini-Lady Liberty will remain in Washington for the next decade.