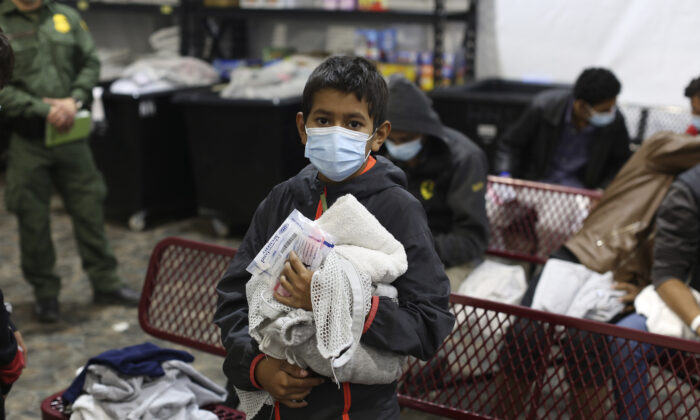 A young migrant waits for his turn to take a shower at the Department of Homeland Security holding facility in Donna, Texas, on March 30, 2021. (Dario Lopez-Mills/Pool/Getty Images)
US News

ALMA, Mich.—Mayor Greg Mapes sent a letter on Sept. 7 to the Alma, Michigan, city commission requesting to undo his recusal from voting on and discussing a controversial plan to turn a former nursing home owned by Masonic Pathways into a resettlement center for unaccompanied alien minors.

Mapes, a longtime Mason, is an outspoken advocate on behalf of the project.

Mapes’s renewed desire to vote on a required conditional rezoning of the six-acre property may be in direct conflict with the opinion of City Attorney Tony Costanzo.

In a July 19 letter to Alma Zoning Administrator Aeric Ripley, Costanzo acknowledged Mapes’s full disclosure of his “40-year history” with the Masons and recognized his past service on the organization’s board.

Costanzo then opined that, according to criteria laid out in the planning commission by-laws, Mapes has “neither a financial nor business interest in this request for conditional rezoning.”

On Aug. 4, the planning commission voted 4–2 to reject the rezoning request and recommended to the city commission to do the same.

Mapes, a member of the planning commission and the presiding officer of the city commission, had earlier recused himself and did not vote on the proposal or attend the Aug. 4 meeting.

Under Michigan law, the city commission has the final say in such matters.

The planning commission has never voted on Mapes’ eligibility to vote on the issue.

In his Sept. 7 letter to the city commission, and in an open letter to Alma city residents published the same day in the local newspaper The Morning Sun, Mapes said he recused himself because of the mishandling by the planning commission of his disclosure that he was a lifelong Mason.

Mapes denied his recusal was due to any conflict of interest.

“I was confident then, and remain so now, that I have the ability to judge the request upon its merits irrespective of any personal associations that I may have,” Mapes wrote in his letter to the city commission.

The mayor’s about-face regarding his recusal drew immediate criticism from citizens’ groups opposed to the proposal.

Robi Rodrigues of Citizens Against said in a Facebook post, “Greg threw the planning commission under the bus.”

Rodrigues told The Epoch Times, “The powers that be are pulling out all the stops. It’s disgraceful.”

The nonprofit Bethany Christian Services is the proposed tenant for the former nursing home and would operate the resettlement center.

Nate Bult of Bethany Christian Services wrote in an email to The Epoch Times, “If approved, the small-group home in Alma would have a capacity to care for up to 36 unaccompanied children at a time.”

Bult said the residents of the home would likely stay in the Alma facility for 30 to 45 days.

Contingent upon the approval of the rezoning request, Bethany Christian Services would pay Masonic Pathways $385,000 a year in rent for the facility.

Mapes’s contention that he had no conflict of interest sparked skepticism from Rachel Marcero, a spokesperson for the group US Against Media, a Lansing-based organization opposed to open borders and projects such as the Alma resettlement center.

Marcero told The Epoch Times: “Mapes has a definite conflict of interest. He should not be allowed to squirm his way back into voting on the issue.”

Marcero characterized Mapes’s maneuver as a desperate effort to try and tip the vote of the city commission in favor of overruling the planning commission’s recommendation to reject the proposal.

“He might just be the deciding vote,” Marcero said. “It’s just another power play like the letter of intimidation sent to the city commission by the Michigan Civil Rights Commission. From no less than the director himself.”

Marcero was referring to an Aug. 9 letter from John Johnson, executive director of the Michigan Department of Civil Rights, in which Johnson stated: “As part of our process and before any determination is made, the City of Alma would be provided with the opportunity to defend its denial of the rezoning request.

“We want to ensure that the City of Alma has fully considered the possible civil rights implications of the rezoning request with counsel before making a final determination.”

Attorney Dave Kallman of the Great Lakes Justice Center described the letter as a “not-so-veiled threat,” coming before any final decision has been made.

Kallman told The Epoch Times that the message being sent is, “If we don’t get the right outcome, you can expect us to come down on you.”

In a phone interview with The Epoch Times, City Attorney Tony Costanzo called it a “not-so-friendly letter.”

According to Ripley, the city commission is expected to bring the issue to a “straight up or down” vote on Sept. 14.

“The commission chambers won’t hold the crowd we anticipate, so we are having the meeting in the high school auditorium,” Ripley told The Epoch Times.

Costanzo told The Epoch Times that, after his discussion with Mapes on Sept. 9, Mapes told him he had decided that he would be at the Sept. 14 city commission meeting and would participate, business as usual, except “he would not be voting on Masonic Pathways conditional rezoning request.”

Mapes didn’t immediately respond to a request by The Epoch Times for comment.