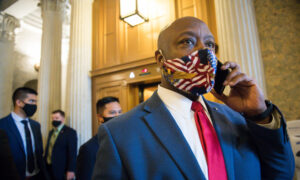 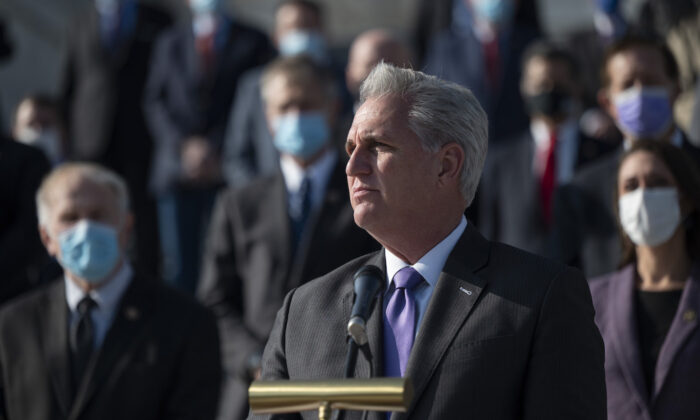 House Minority Leader Kevin McCarth (R-Calif.) speaks during a press conference on the steps of the US Capitol in Washington, on Dec. 10, 2020. (Andrew Caballero-Reynolds/AFP via Getty Images)
Politics

President Donald Trump supporters want Cheney to resign or be removed from her position as conference chair because she voted with Democrats and nine other Republicans to impeach Trump on Wednesday.

But McCarthy, a Trump ally, will not support that effort, a spokesman for the Californian told The Hill on Thursday.

Cheney, the No. 3 Republican in the House, shocked many inside and outside the caucus when she announced Tuesday she’d vote to impeach Trump. Cheney blamed the breach of the Capitol that took place last week on Trump, claiming he “summoned this mob, assembled the mob, and lit the flame of this attack.” A timeline shows that the breach started while Trump was still speaking at The Ellipse, which is about 45 minutes walking distance from the Capitol.

Some Republicans, including Reps. Jim Jordan (R-Ohio), Andy Biggs (R-Ariz.), and Matt Rosendale (R-Mont.) called for a fresh vote on the House GOP chair position after Cheney staked out her position.

Cheney did not tell colleagues of what she planned to do, Biggs and Rosendale said in a joint statement.

“She is weakening our conference at a key moment for personal political gain and is unfit to lead. She must step down as Conference Chair,” they said.

A spokesman told The Epoch Times via email that Cheney responded, saying: “I’m not going anywhere. This is a vote of conscience. It’s one where there are different views in our conference.”

“But our nation is facing an unprecedented, since the civil war, constitutional crisis. That’s what we need to be focused on. That’s where our efforts and attention need to be,” she added.

Jason Miller, a Trump campaign adviser, said on “War Room” on Thursday that Cheney and the nine other Republicans who voted to impeach Trump must have plans not to run again in 2022.

“This is not someone who plans on running for reelection,” he said. “Because I will tell you that the voters are going to hold all 10 of these folks accountable.”

He also wondered why Cheney is still part of the House GOP leadership.

“I would hold a conference meeting this morning,” he said. “They should do that immediately. They cannot have her in that position any longer.”