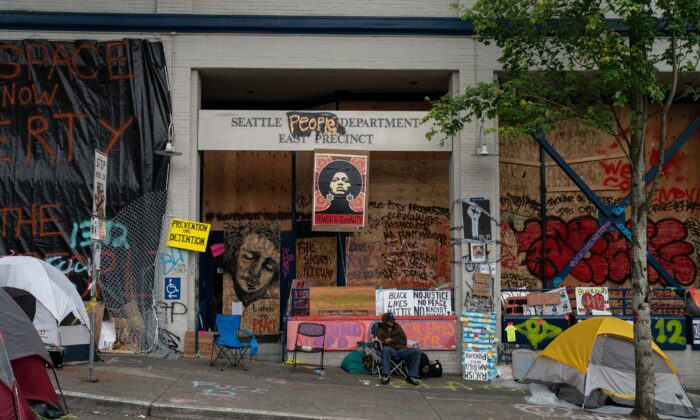 A man sits outside of the Seattle Police Department's vacated East Precinct in the area known as the Capitol Hill Organized Protest (CHOP) in Seattle on June 26, 2020. (David Ryder/Getty Images)
Crime and Incidents

A man set fire to the Seattle police building that officers abandoned just before occupiers turned the area into a so-called autonomous zone, according to a new federal court filing.

Surveillance video from around 3 a.m. on June 12 showed a man, later identified as 35-year-old Isaiah Thomas Willoughby, carrying a red container believed to be full of gasoline and dumping the contents onto a pile of debris lying next to the Seattle Police Department’s East Precinct.

The man left the scene, returning approximately 23 seconds later. After lighting something in his hand, he throws the lit item onto the debris pile, the U.S. Attorney’s Office for the Western District of Washington said in a criminal complaint.

As the man fled the area, bystanders rushed to extinguish the fire.

Because of the ongoing occupation—known as the Capitol Hill Organized Protest (CHOP)—firefighters were unable to respond to the crime scene.

A plainclothes detective went into the area about eight days later to take photographs of where the fire was started.

A witness posted photographs of the suspect on Twitter, and a bulletin using the pictures was distributed by a Seattle police detective.

An anonymous caller who said they knew Willoughby said the man posted on Facebook that he burned the East Precinct before deleting the post as media coverage of the incident increased.

The unique design on the shirt that the suspect was wearing appeared to be on items that are part of a clothing line that Willoughby represents, Sneaker Warz, the caller said.

Police soon received a tip from a second anonymous caller that Willoughby was the suspect. His aunt then called the police, and said: “The person who started the fire is my nephew. Come and get him.”

Willoughby lived with his aunt and uncle in Tacoma, Washington, and was participating in protests in Seattle on June 11 and June 12, the relatives told police. They came to learn that the suspect’s brother helped him delete posts from Facebook and Instagram.

Willoughby’s aunt and uncle confronted him over the fire and he admitted he set it.

When asked why, the suspect said “it was because he was angry about the way he had been treated by officers at the East Precinct during a prior arrest,” according to the criminal complaint.

Before calling the police, Willoughby’s relatives told him to leave the house so as not to bring trouble with law enforcement to the residence. They threatened to call the police if he didn’t.

“Do what you have to do,” Willoughby replied, refusing to vacate the premises.

A search warrant turned up a piece of clothing that matched the shirt worn by the suspect and open-source research showed Willoughby linked to Sneaker Warz.

On one Facebook page linked to Willoughby, officers found the statement: “This why Iam [sic] on the front lines of this Regime change in America if you support my parties then we need you on this Iam burn it down.”

In a picture on the same page, Willoughby posed for a selfie while wearing a red bandana and a white T-shirt with the phrase “Endangered Species” emblazoned across it.

Willoughby was arrested on July 14 and made his first court appearance on July 15.

“Those who worked to turn protests into riots will not escape accountability for their criminal conduct,” U.S. Attorney Brian Moran said in a statement.

“We support every American’s right to protest,” said Mickey French, acting special agent in charge of the Seattle field division of the Bureau of Alcohol, Tobacco, Firearms, and Explosives (ATF).

“But when someone turns to an act of violence, putting many lives in danger, ATF will work to ensure he or she is held accountable.”

The suspect was charged with arson. He faces up to 20 years in prison if convicted.

Moran’s office has charged two others with crimes related to the civil unrest in Seattle. A 25-year-old Tacoma resident was charged with setting fire to five police department vehicles, while a 25-year-old former resident of North Carolina was charged after allegedly striking a police officer with a large can.

After tolerating CHOP for weeks, Seattle officials cleared the space on July 1.