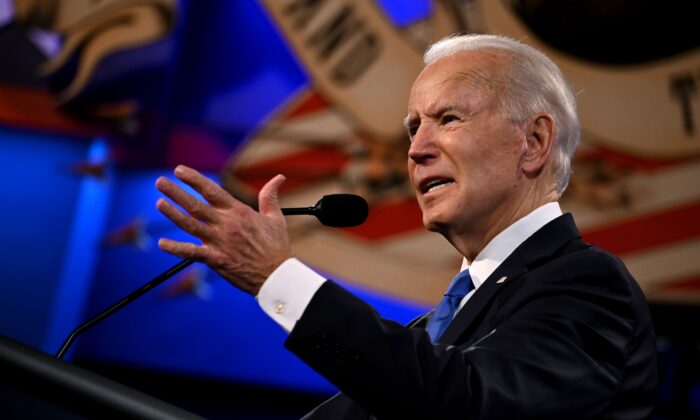 A 19-year-old man arrested in May on child pornography charges also stands accused of making threatening posts and making online searches about killing Democratic nominee Joe Biden, according to court filings and other documents cited in media reports.

Alexander Hillel Treisman, whose listed address is in Seattle, allegedly posted a meme with the caption, “should I kill joe biden?” and sought out information on the internet regarding Biden’s home address, state gun laws, and night vision goggles, according to a court filing by the U.S. Court for the Middle District of North Carolina, as reported by ABC News.

Investigators also alleged in the filing that Treisman traveled to a Wendy’s restaurant within four miles of Biden’s home and “wrote a checklist note ending with ‘execute.'”

The court document cited in the report indicate that, at the end of May, investigators in Kannapolis, North Carolina, found an abandoned van belonging to Treisman at a bank with an AR-15-style rifle, a handgun, ammunition, and explosives. When he later arrived at the bank looking for the van, investigators searched his car and found two more guns, three driver’s licenses from different states, books about making bombs, and found he was carrying a concealed weapon. He was then taken into custody.

According to The Daily Beast, investigators also found an iFunny account they believed belonged to Treisman. In a message thread with another user, Treisman allegedly said he “was going to do a columbine for a while.”

When the other user wrote critically about Treisman wanting to “harm the innocent,” he reportedly replied: “My hatred is for the complacent American people who will turn u in for their own satisfaction. But aside from former goals, my eyes on the future. If anything I have to save bernie.”

Investigators concluded the reference was to Sen. Bernie Sanders (D-Vt.), according to documents cited in the report.

Treisman is currently facing only federal child pornography-related charges, but a judge said in an order earlier this month, as cited by WSOC-TV, that other evidence in the case supports his remaining in custody. He is currently being held without bail at the Cabarrus County Jail, according to WSOC-TV.