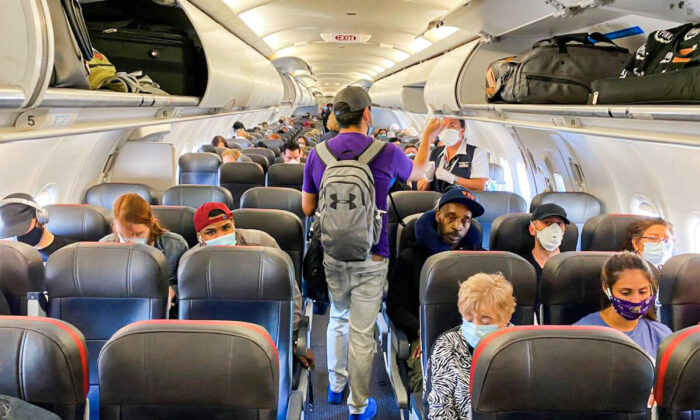 Passengers, almost all wearing masks, board an American Airlines flight to Charlotte, in New York City, on May 3, 2020. (Eleonore Sens/AFP via Getty Images)
Businesses in COVID-19

The Biden administration’s mask mandate will not be enforced while federal agencies review a federal judge’s ruling that the mandate was unlawful, an official said Monday as major U.S. airlines and other transportation entities moved to drop the policy.

The Centers for Disease Control and Prevention (CDC), which issued the mandate in 2021, said the order is no longer in effect due to the ruling.

The Transportation Security Administration (TSA) said separately that, effective immediately, the agency would stop enforcing its directive that required masks at airports and on planes.

U.S. District Judge Kathryn Kimball Mizelle, a Trump appointee, ruled earlier Monday that the CDC exceeded its authority with the mask mandate and inappropriately did not seek public comment before imposing the order.

Major airlines, including United Airlines, said they were no longer requiring masks.

“Masks are no longer required on domestic flights, select international flights (dependent upon the arrival country’s requirements) or at U.S. airports,” United said on Twitter, adding that people may continue donning face coverings if it makes them feel more comfortable.

Alaska Airlines said in a statement that face masks are “now optional on our planes and in airports” effectively immediately.

“While we are glad this means many of us get to see your smiling faces, we understand some might have mixed feelings,” the airline said. “Please remember to be kind to one another and that wearing a mask while traveling is still an option.”

“It has been a long 24 months with nearly constant change. I could not be prouder of our frontline employees who have handled every pivot focusing on safety and the care we’re known for,” said Max Tidwell, vice president of security at the company. “We’re also thankful for our guests who remained considerate, patient and stood by us throughout every twist and turn.”

“We are relieved to see the U.S. mask mandate lift to facilitate global travel as COVID-19 has transitioned to an ordinary seasonal virus,” the statement said.

The airline said Delta employees and customers may continue wearing masks if they wish to do so.

Southwest Airlines and American Airlines issued similar statements following the ruling. Amtrak has also said it will lift mandates for masks, making them optional for guests and employees, as did the Washington Metropolitan Area Transit Authority, New Jersey Transit, and other mass transit providers.

A small number of providers, including the Metropolitan Transportation Authority in New York City, are still requiring masks.

Prior to the ruling, the CDC had extended the Biden administration’s transportation mask mandate through May 3 ahead of its scheduled April 18 expiration.

“As you know, this just came out this afternoon so right now the Department of Homeland Security, who would be implementing, and the CDC are reviewing the decision,” Psaki added. “And of course, the Department of Justice would make any determination about litigation.”