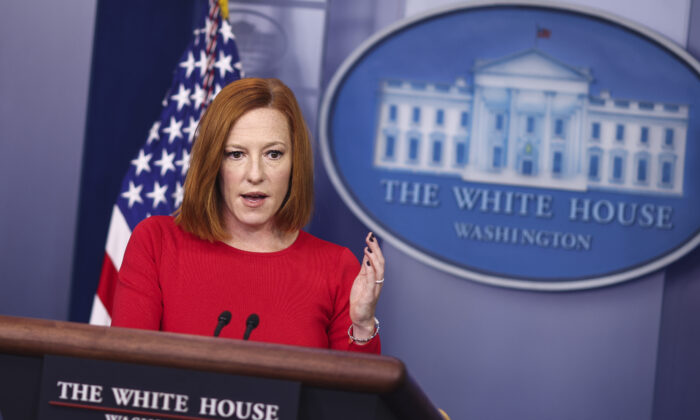 The Port of Long Beach in California saw a record 100 ships waiting to enter on Monday, and stores in some areas in the United States have been unable to keep every item in stock.

“The president is satisfied that progress continues to be made. And one of the reasons that there has been so much traffic in a lot of these ports is because there are more goods that are being ordered by people across the country—people who have more money, expendable resources,” Psaki told reporters on Tuesday when asked about the issues.

“Their wages are up. More people are working than they were a year ago. And, port to port, it’s different. But statistically, some of those ports have 20 percent, 30 percent increased volume as a result of that,” she added.

Psaki also said President Joe Biden took action months ago, including convening a task force aimed at minimizing supply chain disruptions, whose work focused in part on getting manufacturing sites back up and running and coordinating with unions to address worker shortages.

“I think the important thing to understand here is that there are multiple issues that are impacting the supply chain. And some of that is that, as the economy has turned back on, more people had expendable income—wages—to buy more goods. More people are buying more goods. People have started to also buy more things online than going into stores. And so that is also impacting the volume, and there’s a need for more,” she said.

The arguments came after White House chief of staff Ron Klain last week promoted the view that economic problems Americans are facing, including soaring inflation and supply chain disruptions, are “high class problems” that would not be happening if the unemployment rate had not dropped.

Psaki has since defended Klain multiple times, including responding to a CNN host who wondered whether it was “tone deaf” to say rising prices and empty shelves are problems for the rich.

“The fact is that the unemployment rate is half of what it was about a year ago. More people have jobs, more people are buying goods, that’s increasing demand. That’s a good thing. At the same time, we know supply is low because we’re coming out of the pandemic,” Psaki said.

Some economic experts have said Biden administration policies have contributed to rising inflation and labor shortages, including COVID-19 vaccine mandates and trillions of dollars in spending.

Republican members of Congress also say the Biden administration bears much of the blame for the economic issues, and took offense at how Psaki joked about a treadmill shortage during the briefing on Tuesday.

“As shelves across country remain empty, Jen Psaki thinks it’s appropriate to make jokes? American businesses are suffering and the Biden Administration can’t be bothered to doing anything about it,” Rep. Blaine Luetkemeyer (R-Mo.) wrote on Twitter.

Democrats, though, have largely defended the administration.

“The economy is improving and Covid is dropping and those are the main things for most people,” Sen. Brian Schatz (D-Hawaii) wrote on Twitter. “Republicans are being told by their strategists to use the word ‘crisis’ to describe the Biden presidency but the fact is that things have improved a lot since democrats took control.”