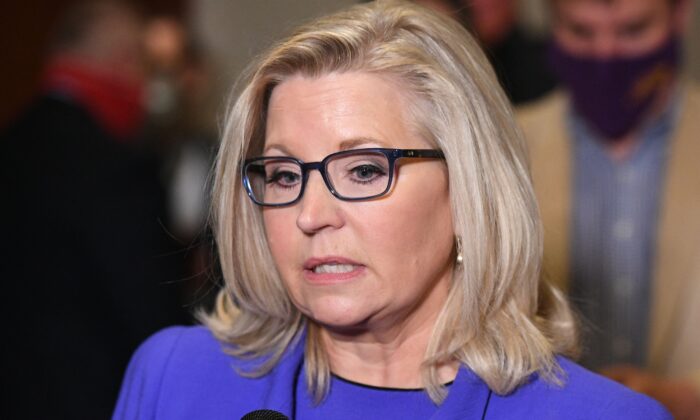 Rep. Liz Cheney (R-Wyo.) speaks to the press at the Capitol in Washington on May 12, 2021. (Mandel Ngan/AFP via Getty Images)
Viewpoints

Liz Cheney, the ‘Big Lie,’ and Resistance to It

Readers of The New York Times were disappointed on May 11 when columnist Thomas L. Friedman announced a change of plans.

“I was going to make this my week for happy news,” he wrote. But then something came up—something so big that to write about anything else would, in his mind, be “like writing a column about the weather the day after Watergate exploded or about Ford Theater’s architecture after Lincoln was shot.”

Somehow, I don’t think that the journalists of former days, when they were writing about Watergate’s “explosion” or Lincoln’s assassination, had to preface their remarks by telling readers–as Friedman does–that “this is a big moment in American history.”

They already knew it.

In the same way, anyone writing about a blatant falsehood shouldn’t have to keep telling readers that it’s a “Big Lie.” If it really is a big lie, readers will probably be able to work that out for themselves.

And here’s a curious coincidence. In the same week that he was going to write about “happy news,” there were a lot of pretty important, but not-so-happy things going on: gasoline shortages, a new threat of war in the Middle East, bad news on inflation and unemployment, and a crisis on the border—none of which had anything to do with Friedman’s “big moment in American history.”

So what was the big moment that presumably dwarfed all those other, not-quite-such-big ones? The demotion of Liz Cheney from the No. 3 leadership position in the Republican caucus of the House of Representatives.

How is the purely intramural matter of a decision by the House minority about whom they want to lead them supposed to be comparable to Watergate or the Lincoln assassination?

If you don’t know, then you haven’t been paying attention to the dominant media narrative of the post-Trump era—which is pretty much the same as it was in the pre-Trump era and the Trump era itself—namely, that Trump is a bad man and a threat to our democracy and way of life.

Friedman is hardly alone among our media Cassandras in supposing that Cheney’s downfall is just the latest sounding of the death-knell for American democracy. Here’s a selection of other headlines from the past week:

So many partisan Democrat scribblers; so little diversity of opinion.

Such unanimity among the majority in anathematizing the democratically elected opposition party sounds to me a lot more like a threat to democracy than anything the House Republicans could come up with.

But, of course, you will recognize that none of this left-wing hysteria is really about Liz Cheney, who only yesterday was hated by the left almost as much as Trump—or her own father, former Vice-President Dick Cheney. Nor can they really believe that her demotion is any kind of “threat to democracy.”

Instead, the latest propaganda campaign is aimed at further reinforcing the constantly repeated bedrock certainty that Donald Trump’s claim that he was cheated out of victory in the November 2020 election is a “Big Lie.” Presumably, the media have to keep finding new ways of reminding us that the Big Lie is a big lie, lest we begin to doubt it.

But I think such doubt is more likely to arise from being told so often and so insistently that we mustn’t doubt it. We know that the media commonly use the word “lie” in regard to anything that doesn’t conform to their pre-determined narrative, and that this isn’t the same thing indicated by the word lie when used in common speech.

That the Democrats and the media can’t see this themselves and tone down the hyperbole and the self-certainty in order to be more credible seems remarkable to me. Yet this appears to be the case. How else could Joe Biden get away with calling the breach of the Capitol on Jan. 6 “the worst attack on our democracy since the Civil War”?

This is a lie so obvious to anyone not in thrall to the media narrative—which claims to be the lone source of the truth—that you might think even Biden would blush to say it.

He didn’t and doesn’t.

Friedman ends his column with this summary of his experiences as a reporter during the Lebanese civil war of the 1970s and 1980s, obviously intended to apply to America today:

“I saw close up what happens when democratically elected politicians think that they can endlessly abuse their institutions, cross redlines, weaken their judiciary, and buy reporters and television stations—so that there is no truth, only versions, of every story. And they think that they can do it endlessly—cheat just one more time, break one more rule, buy one more vote—and the system will hold until they can take it over and own it for their own purposes.

“Then one day—and you never see it coming—the whole system breaks down. Whatever frayed bonds of truth and trust that were holding it together completely unravel.

“And then it’s gone. And there is no getting it back.”

It’s no surprise, of course, that he is utterly blind to the irony that what he’s describing here is much closer to being a description of what’s being done in America by the Democratic media alliance forged in 2016 than it is to anything done or attempted to be done by Trump and his supporters.

They’re currently the only ones trying to resist it.