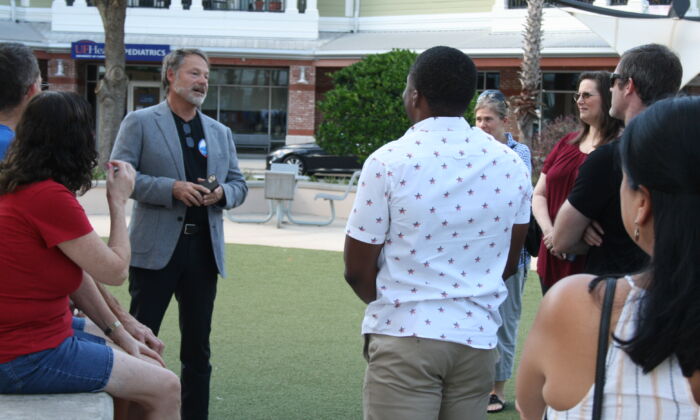 Florida attorney Jeff Childers (gray jacket) updates employees of the City of Gainesville Sunday about a judge’s order stopping the municipality from terminating employees not willing to take a COVID-19 vaccine. (Natasha Holt)
US Features

A legal battle over required vaccinations against the CCP (Chinese Communist Party) virus, commonly known as the novel coronavirus, has escalated again between a Florida city and workers opposed to taking the shot.

And that has the attention of dozens of attorneys across the country, who hope to use the case as a strategic model in representing employees of private companies and municipalities facing vaccinate-or-terminate policies.

On Monday, employees of the City of Gainesville were surprised when attorneys for their employer filed a motion asking the judge to change her decision, saying she’d applied the “wrong legal standard” when ruling that the city couldn’t require vaccines. Two weeks ago, Judge Monica Brasington of the Eighth Circuit Court, blocked the City of Gainesville from disciplining or firing employees that don’t prove they’ve had the vaccine.

Days later, the State of Florida sent the city a letter warning it was in violation of the new state law that prohibits governments from requiring proof of vaccination or recovery from COVID-19. Violations would cost the city $5,000 for each employee required to provide that information, wrote Doug Woolief, division director for Emergency Preparedness and Community Support, part of the Florida Department of Health.

Jeff Childers, a Gainesville attorney representing 250 city employees, said he wasn’t worried, because the arguments and facts of the already-decided case hadn’t changed.

“This was a good move on the city’s part, and it’s probably what I would have done because it buys some time,” Childers said.

The filing signals the city’s plans to appeal the decision, and it needed more time than the 14-day window to prepare, he said.

“It’s not unheard of for judges to reverse themselves,” he conceded. “But it’s rare, because the judge would have to say, ‘I got it wrong the first time.’”

On Thursday, he filed a response to the motion, writing that the city’s request for the judge to change her decision should be denied because it “offers nothing new.”

“It is just a rehash of the arguments it raised at the hearing, but this time combined with a variety of logical fallacies, strawmen, red herrings, false dichotomies, references to evidence not in the record, citations to inapplicable authority and wild speculation about the potential future direction of Supreme Court law–even though the Supreme Court has already spoken to the core issue,” he wrote in his response.

For about a month, he’s been building a loose coalition of lawyers and last week had about 40 on a private message group designed for the exchange of files and strategies.

After his efforts were described a week ago in The Epoch Times, more than 100 more attorneys from around the nation reached out, asking to join the collaborative effort.

By Tuesday morning, in addition to the vaccination fight in Gainesville, he was leading, or helping with, 13 other cases challenging vaccine mandates or school mask mandates in Florida, Georgia, California, and South Carolina.

Another pending vaccine-mandate lawsuit from his growing group will represent doctors and nurses against their employer, Ascension, a national, faith-based healthcare organization with more than 160,000 associates and 40,000 aligned providers. Ascension provides care at more than 2,600 locations, including 139 hospitals and more than 40 senior living facilities across 19 states and the District of Columbia.

And Childers is coaching leaders with America’s Frontline Doctors, a non-profit, non-partisan organization, as they prepare to take on Kaiser Permanente. The company, one of the largest not-for-profit health plans, serves 12.5 million members and is mandating vaccines for its 216,000 employees.

This week, the company put 2,200 unvaccinated employees on unpaid leave. They have until Dec. 1 to get vaccinated in order to return back to work, the firm’s Tuesday statement said.

Many more lawsuits objecting to required vaccinations and mask-wearing will be filed soon, Childers said.

Giving rise to their growing confidence, he says, is improved understanding of a 1905 Supreme Court case often cited when talking about whether or not vaccinations can be forced. In Jacobson v. Massachusetts, the United States Supreme Court upheld the authority of the state to enforce its compulsory vaccination laws.

At that time, Massachusetts was one of 11 states that had such a law. The lawsuit came about after towns and cities in the state began requiring residents over 21 to receive vaccinations or boosters to prevent smallpox, in the hopes of knocking down a 1902 outbreak. The vaccines were free. Adults who refused were subject to a $5 fine. In today’s money, that would be about $159.

Cambridge pastor Henning Jacobson said he had been harmed by a childhood vaccination for smallpox in Sweden, and he and his son had experienced severe reactions to other vaccinations. Saying it would be dangerous for his family to receive the vaccines, he refused to submit and challenged the fine in court. The suit climbed all the way to the Supreme Court. He eventually lost.

Because of the Jacobson case, attorneys around the country had feared that challenging vaccination mandates is a lost cause, Childers said.

“They’ve got it wrong, 180 degrees wrong!” he insists. And he’s spent hours on the phone with attorneys, coaching them on why the Jacobson case gives them the advantage they need to win. “I tell them not to flee from Jacobson, but to embrace.”

In ruling in the Jacobson case, Justices said Massachusetts could uphold its law. That points future cases in the direction of what states’ laws say about bodily autonomy and right to privacy of their citizens, Childers says.

When he realized that pundits were wrong in saying the Jacobson case supported vaccine mandates, and even forced masking, it was a eureka moment for him.

“They’d convinced everybody, even me,” he said. “Jacobson has such archaic language, and it’s hard to read. You really have to unpack it.”

He took the time to study it word-by-word about three months ago. What he learned was that challenges to vaccine and mask mandates could win. And the Jacobson ruling would help, not hurt.

State laws about privacy and bodily autonomy are the key.

In the 1970s, states took the action that makes the difference. With the growing fame of the Roe v. Wade case, many worried the case might be decided in a way to restrict abortions. So legislators in many states rushed to pass laws protecting bodily autonomy and privacy.

As a result, “there’s tons of stuff for lawyers to mine in state laws,” Childers said. “Almost every state has something useful to fight these mandates.”

Now, as attorneys in his coalition unearth even more precedents and helpful case law, they’re composing arguments and lawsuits together. That means more filings, faster.

No matter what’s going on across the country, right now, Don Conklin just wants to know if he can keep his job.

He signed on as a Gainesville school crossing guard three years ago after retiring. Without the income, “it would be extremely hard” for him and his wife to pay their bills, he said. “My income is essential.”

He enjoys his work protecting children as they cross his busy intersection, and he’s become a bit of a local celebrity, waving to the passersby who call out greetings to him or beep their horns every morning or afternoon as they pass.

But he’s not willing to get the vaccine, because it’s just too new and hasn’t been studied enough, he says.

“Maybe if it was 10 years old, I’d have a different opinion. I don’t know. I’d just like to be able to make my own choice about what I put in my body. I just want to work.”

But for now, he’ll just have to wait to see what happens next.

City of Gainesville spokeswoman Shelby Taylor declined to say how many of the city’s 2,200 employees could be in jeopardy if the city prevails in its newest case filing.

“We do not comment on active or pending legal matters,” she said.