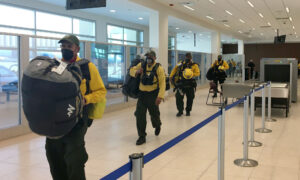 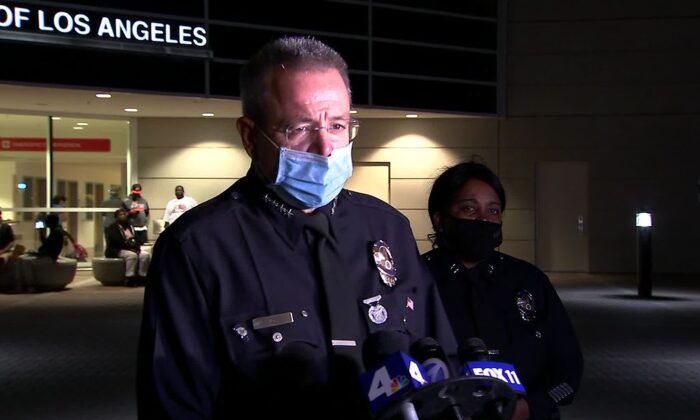 LAPD Chief Michel Moore speaks to the press after an officer was attacked inside the Harbor Island Station in Los Angeles, Calif., on Sept. 26, 2020. (Courtesy of KABC)
Crime and Incidents

A suspect was in custody Saturday night after a Los Angeles police officer was injured in an attack at the department’s Harbor Station in San Pedro, California, officials said.

The officer was hit in the head and is expected to survive, the department said.

Los Angeles Police Chief Michel Moore wrote that the officer suffered “bumps and bruises” but was not shot, adding that he spoke to the officer, who was not named.

“He is resting and will be ok … Harbor units responding pursued suspect and took him into custody,” Moore wrote on Twitter.

The suspect in the case was identified as a male who is 29 years old. Authorities told local news outlets in a press conference that the suspect walked into the station’s lobby before an officer went to talk to him.

Spoke with officer at hospital. He is resting and will be ok. Bumps and bruises. He was not shot. Harbor units responding pursued suspect and took him into custody.

That’s when it “escalated” into “some type of altercation,” Moore said. “During that altercation, it appears at this very early stage that the officer’s weapon was taken from him and rounds were fired by the individual at the officer.”

Mayor Eric Garcetti wrote on Twitter that he is “sending my best wishes for a quick and full recovery to our @LAPDHQ officer injured in an incident at the Harbor Station tonight.”

“The officer is in stable condition and we’re closely monitoring the situation,” he wrote.

The incidents came about two weeks after two Los Angeles County Sheriff’s deputies were shot in an ambush attack in Compton. A suspect in the case has yet to be apprehended.

Meanwhile, the attacks on officers come in the midst of a monthslong effort to “defund the police” in the wake of George Floyd’s death in Minneapolis. The man’s death triggered a resurgence of the Black Lives Matter movement, Antifa-related incidents, and a wave of anti-police animus.