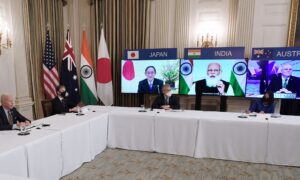 The Chinese Communist Party (CCP) is using a host of warfare strategies against Taiwan, the United States, and other nations it seeks to absorb into its global hegemony, according to Kerry K. Gershaneck, an expert on Chinese political warfare.

A former U.S. Marine officer, Gershaneck has worked for the past three years as a visiting scholar in Taiwan, whose future has recently come into question as the People’s Liberation Army (PLA) mounts its forces for an invasion. In an interview on The Epoch Times’ “Crossroads,” Gershaneck warned Americans that they should be aware of the means the CCP uses in its quest to defeat Taiwan and the United States without fighting a conventional war.

“They want to win without going to kinetic, conventional, or worse types of warfare,” Gershaneck told host Joshua Philipp. “Their approach is to divide and conquer us through subversion, through infiltration, through buying media, through media warfare, through psychological warfare, through legal warfare.”

The CCP, according to Gershaneck, has been sowing discord in Taiwanese and American societies so that people become too occupied by internal conflicts to realize the outside threat they are facing.

“We’re not paying attention to what the PRC is doing, whether that’s through campaign interference, election interference, whether that’s buying off, coercing, intimidating, our Major League Baseball or National Basketball Association or our major hotel chains. We just aren’t focusing on that,” he said. “We’re so focused on fighting each other that we slowly collapse, we disintegrate without even recognizing the war that PRC is waging against us.”

Gershaneck added that this “very vicious, internecine warfare” within the United States is causing Americans and the rest of the world to doubt themselves and the American model. As a result, American and global elites have embraced a totalitarian model marketed by the CCP, which has no regard for human rights, the rule of law, and the values enshrined in the U.S. Constitution and its preceding documents.

When asked about media warfare, Gershaneck told the Epoch Times that it involves not only state-own media, but also “once legitimate” news organizations that speak on the CCP’s behalf after being taken over through through money, infiltration, or coercion.

“It’s under what we used to call ‘front organizations,'” he said. “… Just buying the parent organization alone, you’re able to dictate the news content in the editorial policies of those news organizations.”

Gershaneck also highlighted the recent uptick in numbers of PLA warplanes flying near Taiwan’s airspace, describing it as part of the CCP’s demoralization strategy.

“That’s a psychological operation against the people of Taiwan and the military personnel—every bit as much as it is a preparation for a real attack,” Gershaneck said, noting that a “constant narrative” from the CCP propaganda agencies is that Taiwan has no chance of winning in a fight against the superior PLA forces.