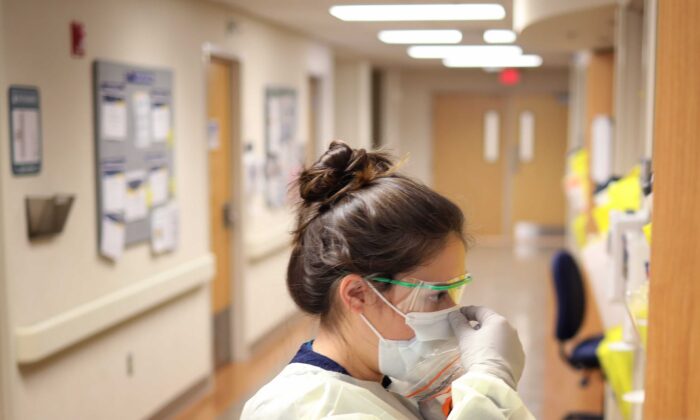 A nurse in the COVID-19 unit of MedStar St. Mary's Hospital check the fit of protective equipment before entering a patient's room in Leonardtown, Md., on March 24, 2020. (Win McNamee/Getty Images)
AMERICA

Johns Hopkins University’s student newspaper has removed an article, in which an economics professor suggested that the current COVID-19 death toll is misleading, based on her analysis of official data.

The article, which was published Sunday on Johns Hopkins News-Letter, focused on an analysis performed by Genevieve Briand, an assistant program director at the university’s economics department. Briand analyzed the effect of the CCP (Chinese Communist Party) virus pandemic on U.S. deaths using data from the Centers for Disease Control and Prevention (CDC), and presented her findings in a webinar.

The CDC data showed that the number of total deaths in the United States between mid-March and mid-September was 1.7 million, of which 200,000 are COVID-19-related. Briand looked at the total deaths in each age group and cause of death, and used that information to evaluate the impact of the pandemic.

“Surprisingly, the deaths of older people stayed the same before and after COVID-19,” the JHN article read. “Since COVID-19 mainly affects the elderly, experts expected an increase in the percentage of deaths in older age groups. However, this increase is not seen from the CDC data. In fact, the percentages of deaths among all age groups remain relatively the same.”

When it comes to causes of deaths, Briand found that the total decrease in deaths by other causes almost exactly equals the increase in deaths by COVID-19. She said this is likely because that many deaths have been incorrectly labeled as COVID-19 deaths when they would have been attributed to heart diseases, respiratory diseases, influenza, and pneumonia.

Briand concluded that she has found “no evidence that COVID-19 created any excess deaths,” meaning that the number of deaths this year isn’t particularly higher than that of a normal year.

The JHN article was pulled down on Thursday without explanation. The student newspaper on Friday wrote on Twitter that the article was “being used to support false and dangerous inaccuracies” about the impact of the pandemic, and that they “regret that this article may have contributed to the spread of misinformation about COVID-19.”

Briand’s webinar, in which she explained her findings in detail with graphs, is still available on Johns Hopkins University’s YouTube channel by the time of this publication.