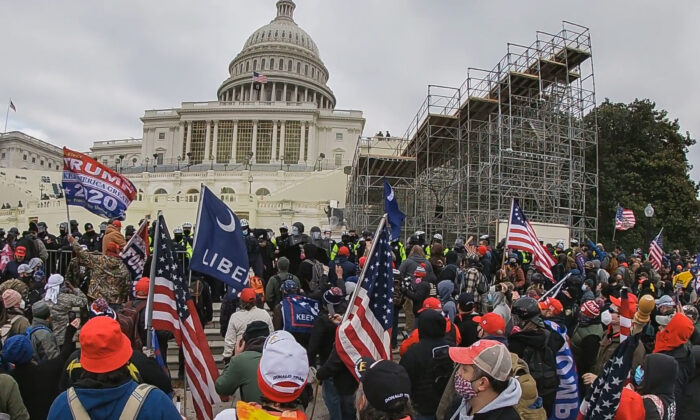 Protesters gather at the police line on the west side of the U.S. Capitol on Jan. 6, 2021. (Special to The Epoch Times)
US News

A Pennsylvania man awaiting sentencing for illegally entering the U.S. Capitol on Jan. 6, 2021, died on July 20.

The death of Mark R. Aungst, 47, of South Williamsport, was ruled a suicide by Coroner Charles E. Kiessling Jr., according to PennLive. A gas field well service technician by trade, Aungst is survived by his mother, a daughter, and three siblings.

On Jan. 6, 2021, Aungst traveled by bus to Washington to attend former President Donald Trump’s “Stop the Steal” rally. He and a companion, codefendant Tammy A. Bronsburg, joined other people in the march to the Capitol.

In court, the prosecution presented evidence of Aungst and Bronsburg entering the Capitol at about 2:45 p.m. and leaving 30 seconds later. After 23 minutes, the duo once more entered the building, taking images and videos on their cell phones as they walked around the place and entered Senate Room 145. Bronsburg then posted a video she took while inside the Capitol on her Facebook account.

Aungst and Bronsburg pleaded guilty to the misdemeanor charge; the other three counts were to be dismissed at the time of sentencing. Aungst’s sentencing was scheduled for Sept. 27. He could have faced six months in prison and $5,000 in fines.

The two defendants were both free on personal recognizance. Neither Aungst nor Bronsburg had attacked any police officer or damaged government property while inside the Capitol, prosecutors have said.

By late June, about 840 individuals were arrested in connection with the Jan. 6, 2021, Capitol breach. More than 300 had pleaded guilty, with 80 receiving jail time. Many of those charged with crimes are still languishing in prisons.

At a June 15 press conference, a group of Republican lawmakers criticized the way January 6 prisoners were being treated, terming it the “D.C. gulag.” They reported cases of prisoners being mistreated.

The January 6 defendants are being “used as pawns to dangle in front of [Americans] to show that if you cross a certain line, if you support a certain president—as in President Donald Trump—or if you dare to speak up against the government or … against an election being stolen, you’re going to be used,” Rep. Marjorie Taylor Greene (R-Ga.) said during her speech.

In an interview with The Epoch Times, Joseph McBride, an attorney for multiple January 6 prisoners and defendants, blamed the government for “manipulating evidence.” A pretrial detainee isn’t supposed to be punished, as the person is considered innocent until proven guilty.

However, McBride revealed that his clients and others like them have been locked away in cells for months at a time, brutally assaulted, denied medical care, and have had their human rights violated.