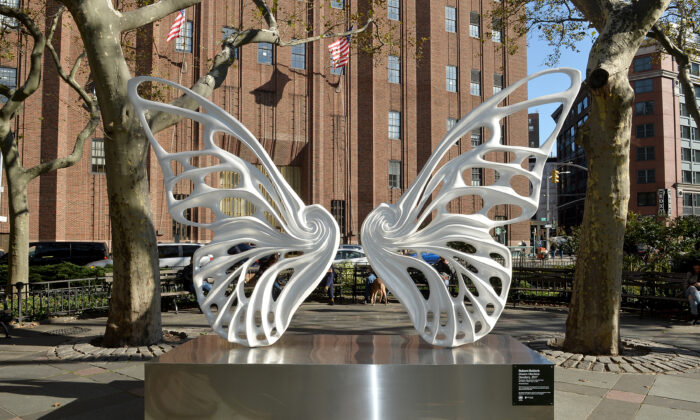 A view of the sculpture by Rubem Robierb dedicated to the transgender GNC community In NYC's Tribeca Park, in Partnership with Mastercard, in New York City on Nov. 4, 2019. (Noam Galai/Getty Images for Mastercard)
Viewpoints

It’s Time to Get Angry: Profiteering Off Delusions About Gender Is Changing Our Culture

As political efforts are made to render null in language and law the reality that there are two sexes and to accept the actual dismemberment of young people to express an amorphous “gender identity,” most people remain immobilized, unsure of what’s happening.

They’re unable to see the attack on humanity that this presents and that getting angry is an appropriate first response. Action is demanded if this dangerous social engineering is to stop.

Normalizing body dysphoria—a disassociation between the reality of one’s sexed body and what one perceives oneself to be—as a lifestyle is a means of opening markets in sexual identity.

The cost of dismemberment surgery is projected to be in the billions by 2026, with a compound annual growth rate of 25.1 percent.

This growth doesn’t take into account the expanding market in puberty blockers for children, wrong sex hormones for young people, medical supplies, drugs used in surgeries and surgical recovery, research, training in specialized surgeries, and so on.

It also doesn’t take into account the cross marketing of body dissociation to corporations and the profiteering of other industries, such as fashion and beauty. The global LGBT consumer market is estimated to be $3.7 trillion and the LGBTQ+ lobby seeks to leverage this market to business. TomBoyX, Calvin Klein, and Thinx corporations have all used the amputations of young women’s healthy breasts in their ad campaigns, normalizing body dissociation and mutilations as self-expression.

This ideology of disassociation is being driven by LGBT NGOs as they intersect with the medical-industrial complex (MIC). The founder of the Arcus Foundation, one of the largest LGBT NGOs in the world, is heir to a medical fortune and uses the stock in his medical corporation to drive the destigmatization of body dissociation globally.

Stryker Medical, supporting Arcus Foundation via Jon Stryker’s stock, is positioned to profit from dismemberment surgeries, as one of America’s largest public companies, bringing in vast revenues for the 75 countries where they sell their medical supplies. Is this profiteering or human rights?

The rearranging of language based on the denial of sex, the demands for inclusivity of new language, and the acceptance of people who choose to take drugs and have surgeries as a subset of humanity, haven’t been an organic development.

The changes have been swift and penetrating through global institutions, corporations, and the law, with Arcus Foundation leading the way. Having funded the crafting of new human rights laws to drive body dissociation institutionally, it’s difficult to assess how much of this is profiteering or an ideological pursuit to change humanity. They seem to go hand in hand.

The pharmaceutical giant Johnson and Johnson is selling double mastectomies to (it hopes) younger and younger women with “body dysphoria,” “chest dysphoria,” or those who “just want a more masculine appearance.”

Surgery centers in California are now offering non-binary and nullification surgery options. UCLA Ob/Gyn Health is offering hysterectomy options on young women’s healthy bodies, to be chosen as if from a Sears catalog.

There are now more than 400 youth gender clinics in the United States alone, where there was one a decade ago. Many of the children being seen there will go on to have dismemberment surgeries and become lifelong medical patients.

The changes being implemented and celebrated are not just in language and law. Castration parties for boys who “feel like girls,” as if that were possible, are being celebrated in mainstream media and Hollywood.

The lobbying arm of the now-goliath LGBT NGOs and their intersection with the MIC is driving the normalization of body dissociation being framed as a human right and these unprecedented and dangerous changes to society. Most people accept the framing and don’t want to make other people feel bad.

Our obsessive focus on protecting people with body dysphoria from their own delusions and honoring their construction of an identity out of those delusions drives the harm deeper into the culture.

The tyrannical imposition of new language that denies biological reality, the literal dismembering of youth, the insistence that any man who claims to be a woman is a woman and has the right to female spaces, and the appropriation of the language that describes our sexed reality and our body parts—these phenomena are creating a dangerous unmooring of humanity.

It’s time that we allow ourselves to be angry about this.

Jennifer Bilek is an artist and investigative journalist tracking the forces behind the gender identity industry. She writes at: The 11th Hour Blog.