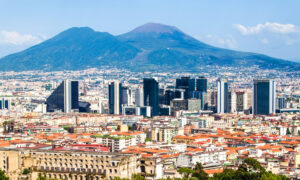 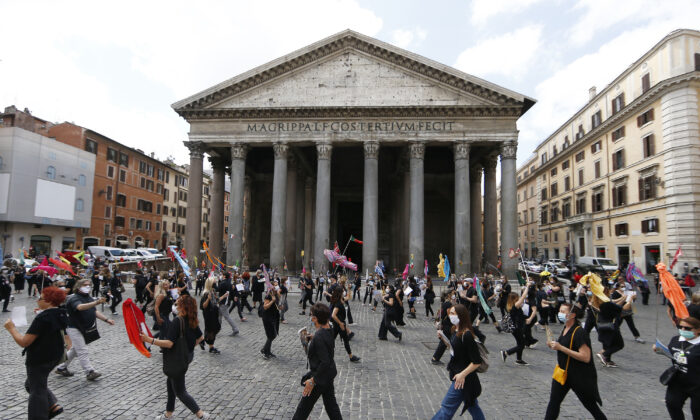 Tourists guides stage a protest in front of Rome's Pantheon, Tuesday, June 9, 2020, asking for government aid after more than three months of travel restriction due to coronavirus have canceled tourism throughout the country. (Cecilia Fabiano/LaPresse via AP)
Europe

Italy to Make Vaccine Passport Mandatory for All Workers: Official

Italy’s government is readying a mandate that will make it required for all workers to have a COVID-19 “green pass,” a type of vaccine passport, officials said Thursday.

“We are heading towards a mandatory green pass not only for public sector workers but also private sector ones,” Regional Affairs Minister Mariastella Gelmini was quoted as saying by The Local on Wednesday. “The vaccine is the only weapon we have against COVID and we can only contain infections by vaccinating the large majority of the population,” she said.

Mariastella said that a cabinet meeting “will be an important moment” in mandating the green pass for all private sector and public sector workers in the country. Should Italy go through with the mandate, it would be the first country in Europe to do so.

Several European countries such as France or Switzerland have vaccine passport requirements in place at venues such as, gyms, restaurants, bars, and similar businesses, as well as for long-distance travel. However, none yet have made it mandatory for private-sector employees. Last week, President Joe Biden announced that he will direct the federal government to enforce a rule that some 80 million private employees in the United States either get the vaccine or submit to weekly COVID-19 testing.

In France, large demonstrations have been held on a weekly basis to rail against the vaccine passports. Opponents of the rule say that it is discriminatory and tramples on individual freedoms.

Failure to have a green pass, or “certificazione verde” in Italian, could result in workers being suspended and losing their pay, Italian officials said, according to the Reuters news agency. It wasn’t immediately clear if it could be used as grounds for dismissal.

Within the United States, Los Angeles County on Wednesday will become the most populous municipality to implement a vaccine passport to enter certain businesses such as bars, nightclubs, breweries, lounges, and related businesses, said County Public Health Director Dr. Barbara Ferrer during a Board of Supervisors meeting. New York City, New Orleans, and San Francisco have imposed similar requirements.

“This is a reasonable path forward that will position us to be better able to break the cycle of surges,” Ferrer told the board. “This modified health officer order aligns with the continued need to reduce risk of transmission and increase vaccination coverage,” she added.