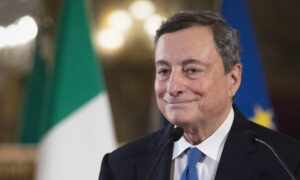 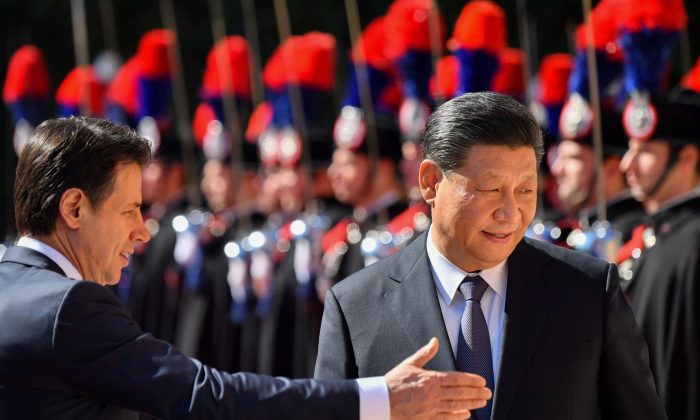 Italy Is Turning Away From the Chinese Communist Regime

A piece of breaking news appeared on various popular Chinese-language websites on June 7 claiming that the Italian Prime Minister Mario Draghi had admitted that the COVID-19 pandemic had originated in Italy in a virtual interview by Radiotelevisione Italiana (RAI). The Chinese reports claimed that Italy had mistaken COVID outbreaks in Milan, Genoa, and Venice in the summer of 2019 for influenza.

This soon was exposed as fake news. The Italian embassy in Beijing issued a statement that afternoon, saying that “The Italian Embassy strongly emphasizes that the content of the article concerning the Prime Minister’s remarks is a complete lie and that the information has no basis whatsoever.”

This happened shortly after Italy’s recent veto of Beijing’s attempted takeover of LPE, a Milan-based semiconductor manufacturer, on March 31.

There is no way of knowing if the fake COVID-19 origins report was Beijing’s retaliation for the aborted deal but it certainly didn’t ease tensions between the two countries.

Expert: 5 Reasons Italy Is Cooling Its Relationship With China

Italy’s blocking of the Chinese acquisition was an abrupt change in course for the European nation that had been growing a close relationship with the Chinese regime in Beijing.

In 2019, Italy under the leadership of former Prime Minister Giuseppe Conte, became the first G7 country to embrace China’s Belt and Road Initiative (BRI), against the advice of the United States and other G7 members.

In 2020 when the pandemic hit, Italy was the most impacted country in Europe. China donated 31 tons of personal protective equipment and virus testing kits to Italy in March 2020, as well as a dozen medical experts to support the health response.

Italy had also been one of the most pro-China EU members in recent decades. Between 2000 and 2019, Italy received 15.9 billion euros ($19.25 billion) in Chinese investments, making it Europe’s third biggest beneficiary. Recent financial troubles saw numerous China-based companies acquire a number of Italian businesses. As of 2020, more than 400 Chinese groups held stakes in 760 Italian companies across “highly profitable or strategic sectors.”

One of the best-known acquisitions was that of the AC Milan football club for 740 million euros ($788 million), previously owned by former Prime Minister Silvio Berlusconi.

But the change in approach to China didn’t surprise experts like Cheng Chin-mo, director at the department of diplomacy and international relations of the Tamkang University in Taiwan. “This demonstrates the unravelling of China’s diplomacy in Europe,” Cheng told The Epoch Times. “There are five reasons why this is bound to happen.”

Although China’s “mask diplomacy” strategy helped ease some immediate supply shortages for Italy, the country can’t forget that China’s cover up of its coronavirus breakout caused the catastrophe in the first place, Cheng said. Italians have seen four million COVID-19 infections, and almost 127,000 deaths from the disease caused by the Chinese Communist Party (CCP) virus. The pandemic was devastating for Italy’s already struggling economy, causing a 13 percent drop in per capita income in 2020 while the economy contracted by almost 11 percent. Free facial masks are just not enough to clear the clouds, Cheng said.

Secondly, China has made itself with a bad reputation in business ethics and conduct over the past decade, Cheng said, adding that Chinese businesses and investors are known for violating local regulations and agreements, which deeply upsets Europeans who value integrity.

“Chinese money was enthusiastically welcomed in Italy when the BRI MoU was signed in 2019. But the country has since found no material benefit from the collaborations,” he added. “On the contrary, some century old Italian businesses have turned for the worse or even went bankrupt after they started partnering with China.”

Thirdly, China’s “wolf warrior diplomacy” has turned many former fans off, Cheng said. In response to the EU’s sanctions in March over the regime’s genocide of Uyghurs in Xinjiang, China’s Ministry of Foreign Affairs said in a statement that the sanctions were based on “nothing but lies and disinformation.” It asked Brussels to “reflect on itself [and] face squarely the severity of its mistake” and stop “interfering in [China’s] internal affairs.”

Draghi’s political position is the fourth factor, Cheng said. Draghi, who holds a very friendly attitude toward the United States and the EU, described his foreign policy as “strongly pro-European and Atlanticist, in line with Italy’s historical anchors.” Contrary to his predecessor, Draghi, who was elected in February, has shown clear determination to seek alliance with the United States. Shortly after his appointment, Draghi reaffirmed Rome’s membership in NATO and the historic friendship between Italy and the United States. The vetoing of the LPE deal is seen as a signal of the new administration’s focus on stemming Beijing’s political and economic influence in Italy, Cheng said.

Lastly, Cheng pointed to the global environment, which is turning against China. The U.S.-led international effort to curb communist China’s global expansion and human rights abuses, as well as the investigation in China’s role in the outbreak of the pandemic, have encouraged G7 countries to openly speak and act against the CCP’s atrocities, which they had avoided for many years fearing hurt to their business relationship with China. Meanwhile, Europe is growing much more wary of the threat the CCP’s poses to nation’s security after the CCP’s infiltration tools such as Huawei and the Confucius Institute were exposed.

However, public sentiment toward the Chinese regime may take some time to change, as many Italian national media outlets have been frequently publishing pro-regime content and the mindsets of their journalists have been infiltrated quite deeply by CCP propaganda. Francesco Galietti of the Rome-based thinktank Policy Sonar told Breitbart that “the Chinese have 100 percent infiltrated Italian media.”

Breitbart also revealed in a June 7 report that an Italian-language video series on “Xi Jinping’s Classical Quotes” developed by Chinese state-owned China Media Group had been broadcast on Italy’s Mediaset and the Chinese-language outlet Cinitalia.

“The National Associated Press Agency (ANSA), Italy’s equivalent to The Associated Press or Agence France Presse, has also been publishing up to 50 Italian language wire articles per day from Xinhua News Agency, the state-run wire service for the Chinese Communist Party. Again, ANSA does not disclose to its readers that the Chinese government runs and approves all Xinhua content,” the report read.

Italian national newspaper Il Giornale has been publishing CCP propaganda regularly since 2019. A May article in Il Giornale suggested that reports about the CCP’s genocide of the Muslim Uyghur people were a mere “media manipulation of events” crafted to use “human rights concerns” to further America’s foreign policy agenda, echoing the regime’s party line.

The Breitbart report also noted that a magazine published by Cinitalia “openly admits that it produces its Italian content in association with the Chinese Embassy in Italy.”

Il Giornale is owned by former Prime Minister Silvio Berlusconi, who was critical of the CCP until he sold the AC Milan soccer club to Chinese investors for $788 million in 2017 due to financial troubles. Since then, Il Giornale’s China-related content have looked very similar to the CCP’s propaganda.

EU members, including Italy and Hungary, are starting to push back on the CCP’s coercion both economically and politically.

The EU condemned the Chinese regime’s human rights record in a conference earlier this year, and France sent a warship and submarine to the South China Sea for a “freedom of navigation” patrol in February.

On May 22, Lithuanian Foreign Minister Gabrielius Landsbergis said in a statement that the Baltic nation does not see itself as part of Beijing’s “17+1” platform for EU member states and five Balkan countries anymore, according to the Baltic News Service. He said the Chinese platform was “divisive” from the EU’s point of view and called on EU members to pursue “a much more effective 27+1 approach” for its communication with China.

Hungarian premier Viktor Orban, who has reportedly built cordial ties with the Chinese regime, including massive joint business projects, and has several times this year blocked EU statements denouncing the Chinese regime’s record on human rights, had to pause a planned project with China’s Fudan University amidst massive protests this month. His government has since announced a referendum on the project.