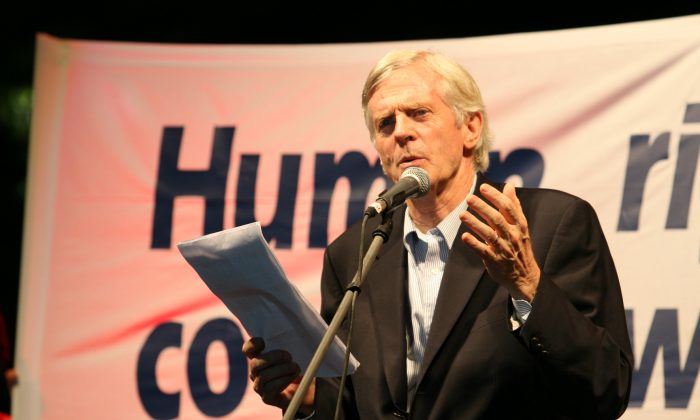 Epoch Times: What’s the most important new finding in this new report?

David Kilgour: The Party-state in China argues that there are around 10,000 organ transplants across the country—but this update shows beyond any reasonable doubt that it’s an industrial-scale industry, it’s many times larger than previously believed, and we’re talking about many tens of thousands of organ transplants being done annually. That, to me, is the really significant thing about what the update will say.

Epoch Times: Why is that important, or a big problem?

Mr. Kilgour: When the U.S. House of Representatives passed H.Res. 343, the Chinese Embassy in Washington said it was a groundless accusation, and they also said in 2015 that the Chinese government was stopping the harvesting from executed prisoners. Huang Jiefu, China’s top transplant official, has never admitted to a single Falun Gong so-called “donor.” They always talk about capital prisoners.

Over the past five or seven years, we’ve never seen Huang Jiefu admit they’ve been taking organs involuntarily from prisoners of conscience, mostly of course Falun Gong, and as Ethan Gutmann has pointed out, a much smaller number of Tibetans, Uyghurs, and House Christians. It’s a case of propaganda against what we think is overwhelming evidence in our update, that it’s being done on an industrial scale, and that other than talk there’s been no reduction at all in numbers. I think our update will convince fair-minded readers that the numbers have kept going up.

Epoch Times: How do you come to say that these organs are coming from Falun Gong?

Only the Falun Gong practitioners are examined periodically by doctors—and it’s clear when they describe the medical exams, that they have nothing to do with health.
— David Kilgour

Mr. Kilgour: We know all kinds of related factors. Firstly, in the 350 labor camps across the country, we’ve spoken to people who managed to get out of these camps, and they’ve indicated that only the Falun Gong practitioners are examined periodically by doctors—and it’s clear when they describe the medical exams, that they have nothing to do with health. The regime doesn’t care about health. It’s an examination for organ transplants. Only Falun Gong are examined in these institutions—they’re modeled after the ones created by Hitler and Stalin, where you go there on the signature of a policeman for three years. So clearly Falun Gong are the main source of these organs.

Epoch Times: You were once Canada’s Secretary of State for Asia-Pacific—how would someone in that position deal with something like this, if it came across their desk. How would you have done so?

Mr. Kilgour: That was from 2002 to 2003. David Matas and I didn’t do our study until 2006. I was dismally unaware of what was going on with Falun Gong at that point. I had Falun Gong practitioners coming to see me, and I was disturbed by what I heard, but to my shame I didn’t voice those concerns actively or vigorously enough with officials in China or Canada, or other places. But later David Matas and I did our study and our revised study, and then the book, and have continued to look into the evidence since 2006. We have shown it’s happening, and this update shows it’s happening on an industrial scale. No one will have difficulty believing it’s happening—even medical practitioners in rule-of-law countries. So The Transplantation Society [the global transplant leadership body] will, I hope, take the report very seriously.

Epoch Times: What do you think The Transplantation Society, and other peak professional bodies, should be doing?

Mr. Kilgour: Their job is to see that transplants are being done ethically. They should know that transplants are not being done in accord with the Istanbul Declaration, or any other international accord; the reason the big global transplant conference hosted by TTS is being held in Hong Kong later this year is because Hong Kong is part of China. It’s ironic that Hong Kong has a system that ensures transplants are done ethically. But it’s clear that this conference should not be hearing from people like Huang Jiefu, for the obvious reason that Huang Jiefu has been doing nothing but tell lies—or great untruths—for years, about these matters. While it’s hard for a transplant surgeon from China to take a stand on this, at least the transplant surgeons from all other countries should be taking a firm stand. But I’m afraid that because it’s being held in Hong Kong, it’s clear that we shouldn’t be expecting too much from the Hong Kong conference, most regrettably.

I think our update is going to shake a lot of people about what’s going on in China in this area. It’s the only place on earth where prisoners of conscience are murdered for their organs so that they can be sold to both Chinese and organ tourists.