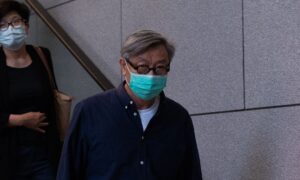 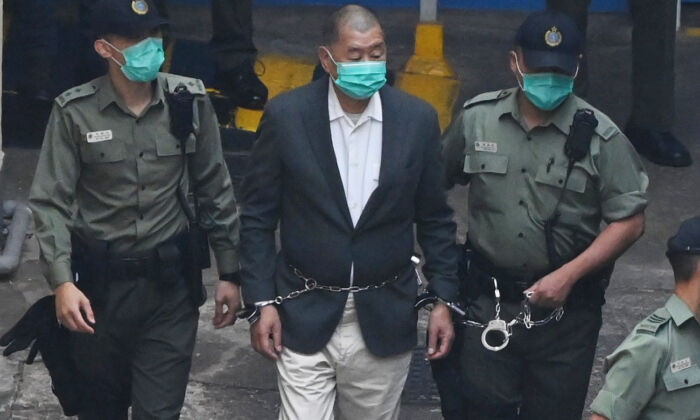 Hong Kong pro-democracy media tycoon Jimmy Lai is led into a police van as he heads to court to be charged under the Beijing-imposed controversial new national security law, on Dec. 12, 2020. (Peter Parks/AFP via Getty Images)
Hong Kong

Lai was awarded the honor for his courage and conviction in exercising the fundamental rights of freedom of speech, nonviolent resistance, and peaceful dissent.

Jeffrey Rosen, president and CEO of the National Constitution Center, described Lai as a “freedom hero” in a video of the ceremony held online due to the pandemic.

“You’ve sacrificed your own freedom and well-being in order to help secure the blessings of liberty for others,” Rosen said.

“And you have rejected the idea that criticism of a government can legitimately be punished as sedition, inspiring others to continue fighting for freedom of Hong Kong.”

In 1995, Lai’s company, Next Digital, founded Apple Daily—a widely-read tabloid frequently critical of the Hong Kong government and the Chinese Communist Party. The newspaper closed in June 2021 following a raid by Hong Kong police. Earlier this month, Next Digital announced that it is going into liquidation. The company’s assets had already been frozen as part of a national security investigation.

Lai was arrested in August 2020 on charges of violating Hong Kong’s new national security law that was imposed by Beijing mid-last year to clamp down on the city’s pro-democracy forces.

The 73-year-old is currently serving a 20-month sentence “for organizing and taking part in an unauthorized protest.” He is also facing six other charges ranging from “colluding with foreign forces” to “inciting others to take part in the unauthorized assembly.” Under the new national security law, three of the six charges hold a maximum penalty of life imprisonment.

“Mr. Lai would want me to note that he himself is not important, it is the values he represents, and the struggle to advance those values of people in Hong Kong and elsewhere in China, which matter,” Cunningham said.

“For many of us, it is a tragedy that the rule of law and freedom of thought, education, speech, and property are being extinguished in Hong Kong at the behest of Beijing. This is not the Hong Kong I knew and admired when I was the U.S. Consul General there.”

Cunningham said that Lai once told him that “his character is to fight for liberty.”

He pointed out that Hong Kong authorities seized Lai’s business and property without anything resembling due process.

His offense is “being a successful Hong Kong media figure who defends freedom of speech, Liberty, and democratic values in the face of mounting repression,” Cunningham said.

“Jimmy Lai was the only major Hong Kong businessman who had the guts to stand up and openly support the pro-democracy movement, both before and during the protests of 2019,” said Rubin who interviewed Lai in November 2019 at the peak of the student protests, when his paper was at the forefront of pushing for freedom of speech.

“I remember just being really struck by the guts of this guy. And he didn’t know better than anybody else what was going to happen. But he was willing to put his neck on the line to fight for Hong Kong and to fight for democracy in the region,” she added.

Lai was also awarded the Freedom of Press Award by Reporters Without Borders in December 2020.

Another Liberty Medal recipient was Saudi women’s rights activist Loujain al-Hathloul, who was held for nearly three years in a prison for campaigning to legalize driving for women in Saudi Arabia. She was released in February 2021 but remains under many restrictions.

“Today’s ceremony is not an ordinary Liberty Medal presentation. Our two honorees are unable to be with us in person to accept the award,” Rosen said. “Their absence is a powerful reminder of the great personal sacrifices both have made, for fighting for freedom against tyranny.”

The Liberty Medal was established in 1988 to commemorate the bicentennial of the U.S. Constitution, to honor men and women of courage and conviction who strive to secure the blessings of liberty to people around the globe. Out of the last 32 Liberty Medals, 15 have been awarded to individuals outside of the United States. Seven of the Liberty Medal recipients have also received the Nobel Peace Prize.

Watch the ceremony below.