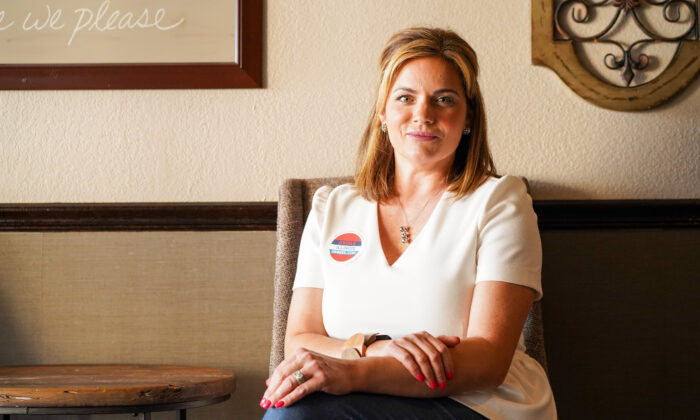 Since the onset of the pandemic, Shannon Adcock has taken many first-ever steps as a suburban mother.

She spoke at her school board meetings, attended her first rally to support the return to in-person learning, and ran for a seat on the local school board.

Now, she is working to mobilize a network of tens of thousands of like-minded Illinois parents to cast informed votes in the midterm elections and beyond.

“Motherhood made me an activist,” Adcock told The Epoch Times. “My utopia vision for the midterm year is that every mom knows their ballot as well as the latest Real Housewives drama, and every dad goes to the ballot and knows it as well as their fantasy football league.”

Adcock lives in Naperville, and her three children attend schools in one of the state’s best districts, Indian Prairie School District 204. The district sits west of Chicago and has an enrollment of about 26,000 students.

For years, Adcock took it for granted that she and her husband lived in a nice Chicago suburb, paid a good amount of taxes, and provided an excellent education for their children.

But that curtain was pulled when the pandemic hit, she said. After schools were closed for in-person learning, she saw how her children struggled to learn on screens for long periods of time; through virtual classes, she saw how politically-infused content took time away from reading, math, and science.

Adcock began to think the school district she put so much trust in had failed to put her children first. She started to speak her mind at school board meetings. When she felt her voice was not heard, she decided to run for a school board seat herself, which she lost.

Soon, that journey led her to found Awake Illinois, a statewide nonprofit organization that has grown to 31 chapters with about 20,000 members, many being parents who had a similar journey to hers, she said.

“The parents needed a portal to elevate their voices that didn’t have to do with political parties. It was just an independent, grassroots effort, a good way to unify,” Adcock said.

“When you look across the country, this isn’t just happening in Illinois. It is in red states and blue states. Hopefully, this will plant seeds so that going forward, our children and grandchildren will be better equipped to really pay attention and advocate for what’s best for their families.”

In April, her organization began to invite candidates to pledge support to a resolution that calls for greater parental rights in children’s education, such as access to an annual curriculum transparency report and mandatory parental consent to health care procedures.

Both Bailey and DeVore had been vocal about their opposition to various statewide mandates during the pandemic, including masking, quarantine, and vaccination mandates at schools. DeVore represented hundreds of parents, including Adcock, in their legal battles against their school districts, the Illinois State Board of Education, and Governor J.B. Pritzker.

“We rally the troops with a common-sense, conservative, freedom type mindset and breed courage within each other to step up and do something. If we stand up courageously, take the bumps and bruises, take the cancel culture, I believe God will show His way,” Mcllroy said.

Adcock is working to bring similar voter empowerment initiatives to other local chapters. Through Awake Illinois, she also hopes to keep the parental activism momentum going beyond this midterm election year into the school board races in 2023 and beyond, she said.

“This is beyond politics, and we cannot just rely on politics to carry the weight. We must always remain engaged parents and community members in our children’s education, no matter who is in office,” Adcock said.

At the same time, she has been identifying school board candidates in her neighborhood and encouraging them to run, including an Asian American mother who values core education subjects over politically infused content.

Down in central Illinois, McClean County GOP chairperson Connie Beard has also been gearing up for next year’s school board races. For the first time, Beard is hosting a series of workshops for school board candidates this year.

“I think parents are finally saying this is enough. The idea that parents are supposed to be just signing off responsibility for their child’s education, to whoever happens to be assigned to their child’s class, is something they are not going to be comfortable with anymore,” Beard said.

She is comfortable with the fact that her party is getting more and more involved in nonpartisan school board races across the country. A notable development just took place last month in Wisconsin, where a slew of Republican-backed school board candidates got elected.

Late last year, the state of Tennessee passed legislation authorizing partisan elections for school board races. Early this year, Indiana legislatures debated on a similar bill, which was later abandoned.

“I think it is disingenuous to say a school board member is somehow apolitical because we are seeing politics brought into the classroom already. Teachers and administrators have already injected elements of education that are really political in nature,” Beard said.

“A line has already been drawn. At some point, you have to decide which line you are going to get in. If you keep in that grey area for too long, you end up not accomplishing anything,” she said.

By having the GOP identify and support candidates, voters can tell the political identity of a candidate and make informed decisions at ballot boxes, Beard said. The party’s involvement can also mold the parental energy in a way that minimizes negative political effects.

For example, her party offers tips to parents about how to communicate at school board meetings. She said the anger and verbal attacks from some parents toward school board members actually create a negative field for recruiting new, quality school board candidates.

Her goal is to add two more Republican-backed candidates to either board at the two largest school districts in her county next year.

For Dan Vosnos, a parent of two small children in a north Chicago suburb, it is not so good to see parties get into nonpartisan school board races. That will further divide the communities, Vosnos said.

Vosnos has been identifying parents on both sides of the aisle that put children first and encouraging them to run for school boards, he said.

A former athletic director at high schools, Vosnos quit his job last year, partly because he disagreed with school mitigation measures. At the time, he was tasked with contact tracing and enforcing social distancing rules every day.

“I looked in the mirror every day and didn’t believe what I was doing. I didn’t believe it was best for kids. Education brings kids together, and I was tasked with keeping them apart,” Vosnos said.

He also has a special needs son, who relies on in-person therapy and face-to-face interactions.

“As a family, we weighed the pros and cons of masking him, and we chose as a family to never mask. Everyone had choices to make during the last two years and my family made those choices,” Vosnos said.

A political independent, Vosnos said he tried to use common sense, not a political lens, to discern what is best for children.

Now he volunteers as an education liaison at Awake Illinois, helping parents communicate with teachers, administrators, and school board members. He also works to build bridges between people who have different views but share the same desire to do what’s best for children.

“There are a lot of things that school districts do well, and you should be clapping your hands. When the districts come up with things that you disagree with, let us try to find a middle ground and solve the problem,” he said.

For example, on critical race theory and gender issues, it might be better for schools to teach them through an optional after-school program instead of injecting them into core subjects in regular class sessions.

“When kids are identifying gender flags, but they cannot identify the Australian flag, the German flag, or the Mexican flag, that is a problem,” Vosnos said.