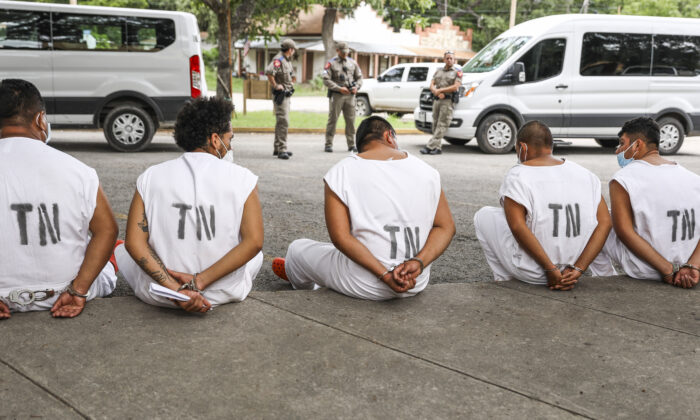 The lawyers for the 15 plaintiffs hope to turn the case into a class action lawsuit on behalf of more than 2,000 illegal immigrants whom they say have been over-incarcerated; arrested based on race, immigration status, or national origin; as well as denied due process.

“In particular, the Plaintiffs and the Class Members have suffered a common cause of injury, namely the violation of their Fourth Amendment and Fourteenth Amendment rights,” the lawsuit states.

“Using state criminal law, the state of Texas and participating counties have created, and are carrying out what is, in reality, a system of state immigration enforcement that targets Black and Brown—primarily Latino—individuals for prosecution and enhanced punishment.”

The lawyers are seeking ​​$18,000 per day for each inmate that is found to have been unlawfully incarcerated or unlawfully reincarcerated. They also seek an injunction to discontinue the Operation Lone Star program.

The lawsuit was filed in the U.S. District Court for the Western District of Texas, Austin division.

Operation Lone Star (OLS) was launched in March 2021, and Gov. Greg Abbott beefed up the number of Texas state troopers on border roads to intercept smuggling operations and Texas National Guardsmen to augment security and observation along the border.

Kinney County and neighboring Val Verde County in south Texas were the first to begin the trespass prosecutions under OLS, and since then, seven more counties have joined, including Edwards, Frio, Jim Hogg, Kimble, Maverick, Uvalde, and Zavala.

Kinney County and its sheriff, Brad Coe, are listed as defendants in the lawsuit, along with Abbott, Texas Department of Public Safety (DPS) Director Steve McCraw, and DPS Executive Director Bryan Collier.

“Under the guise of state criminal trespass law but with the explicit, stated goal of punishing migrants based on their immigration status, Texas officials are targeting migrants,” the lawsuit alleges. “OLS targets only migrants, and only men of brown or black skin.

County Attorney Brent Smith said his small county has struggled to keep up with the volume of prosecutions—he went from about six cases per month to more than 30 per day.

But, he said, the law has safeguards in place to protect alleged criminals.

“For instance, a writ of habeas corpus hearing is triggered when more than 30 days elapses before there’s a complaint filed. And when that occurs, they’re eligible to get a reduced bond or a PR bond,” Smith said in an earlier interview.

Regarding the lawsuit, Smith told The Epoch Times on May 2 that “it reads more like the liberal media propaganda than something based in actual law and fact.”

He spurned the racial profiling allegation. “Nowhere in the entire complaint can they point out where we didn’t arrest someone because they were white or non-Hispanic or non-Latino. If you’re breaking the law, you get arrested,” he said.

Coe said he’s heard about the lawsuit but hasn’t been served or seen it yet.

“It’s kind of hard to profile when a) you can’t see inside the vehicles, everybody has tinted windows. And b) it’s hard to profile when you’re sitting there waiting for somebody to show up and a group of 10 shows up and they’re all Mexicans. So how is that profiling?” Coe told The Epoch Times on April 29.

Lt. Christopher Olivarez, DPS spokesman for the south Texas region, told The Epoch Times via email that “the department does not discuss pending litigation.”

The Texas legislature has approved nearly $3.5 billion for OLS since September last year.

Since its inception, the program has been condemned by state Democrats, organizations such as the American Civil Liberties Union (ACLU), and lawyer groups for illegal immigrants.

A group of 50 Democrats in the Texas House of Representatives wrote a letter in January urging the departments of Justice and Homeland Security to investigate the program. The ACLU filed its own 50-page complaint to the Department of Justice in December 2021.

“Anti-immigrant hate is on the rise in Texas, and state and local officials are fanning the flames,” the ACLU stated in its complaint.

Abbott has defended the program, saying it “continues to fill the dangerous gaps left by the Biden administration’s refusal to secure the border.”

“Every individual who is apprehended or arrested and every ounce of drugs seized would have otherwise made their way into communities across Texas and the nation due to President Biden’s open border policies,” Abbott said in a statement on April 29.

Abbott, a Republican, declared a state of disaster on May 31, 2021, as the crisis escalated. This meant most misdemeanor charges of trespassing were elevated from a Class B to a Class A misdemeanor, which carries a higher penalty. The charge is also elevated if the individual has a deadly weapon or is found more than 100 feet past the property line on agricultural land.

The illegal aliens arrested on ranches in Kinney County aren’t turning themselves over to Border Patrol and seeking asylum, Smith said.

“They’re being smuggled across. And then whenever law enforcement locates them, they’re running. They’re not trying to surrender at all,” Smith told The Epoch Times in an earlier interview.

“If they were trying to claim asylum, they’d be doing that at the port of entry, or the first law enforcement they come to. But instead, they’re evading law enforcement—and they’re destroying property while they do it.”

Kinney County has prosecuted more than 2,885 illegal aliens for trespassing and evading arrest since August last year, as well as several U.S. citizens.

The county only has 14 male-only jail spaces, which are perpetually full. So the aliens are booked and appear before a magistrate at a tent facility in neighboring Val Verde County.

From Val Verde, troopers transport them 100 miles away to the Briscoe Unit in Dilley, Texas, which has been repurposed to detain almost 1,000 illegal aliens who are waiting for their court cases and serving out their sentences. The Segovia Unit in Edinburg, Texas, has also been repurposed for OLS detainees.

Kinney County’s first jury trial is scheduled for May 9, after several aliens pleaded not guilty to their trespass charges.

Border Patrol agents made more than 1.3 million apprehensions of illegal aliens in Texas in 2021. An additional half million are estimated to have evaded capture.