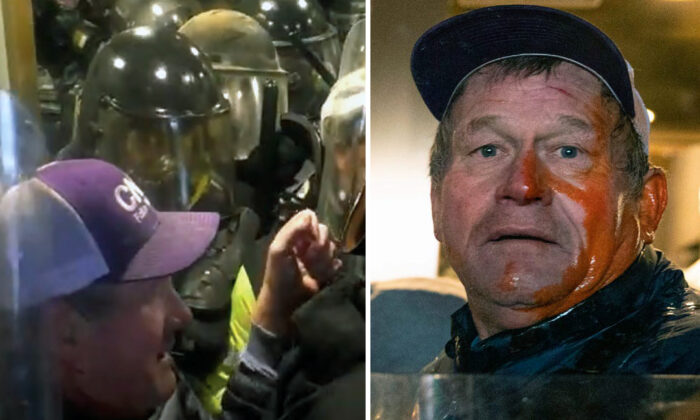 Duke E. Wilson, 68, was sentenced to 51 months in prison for violence at the U.S. Capitol on Jan. 6, 2021. (U.S. Department of Justice/Screenshot via The Epoch Times)
US News

Idaho Man Sentenced to 51 Months in Prison for Attack on Police at US Capitol on Jan. 6

A 68-year-old Idaho man who shoved a police officer, struck him with a plastic pipe, and then threw it at a line of officers during the Jan. 6, 2021, breach of the U.S. Capitol was sentenced on March 4 to more than four years in federal prison.

Duke Edward Wilson, of Nampa, Idaho, was sentenced by U.S. District Judge Royce C. Lamberth in Washington to a term that is five months longer than that sought by federal prosecutors, and at the top of the range set in federal sentencing guidelines. The 51-month sentence was for each charge, but the sentences will be served concurrently, the judge said.

Lamberth also ordered Wilson to pay $2,000 in restitution to the Architect of the Capitol, and serve three years of supervised release after his prison term. The judge will enter a separate restitution order within 90 days that takes into account injuries suffered by U.S. Capitol Police Sgt. Aquilino Gonell.

Wilson pleaded guilty to two felonies: assaulting, resisting, or impeding police, and obstruction of an official proceeding. As part of a plea agreement, nine other charges were dismissed.

Prosecutors charged Wilson with hitting and jabbing at police with a PVC plastic pipe he found on the ground. Wilson “indiscriminately struck at the officers with it,” said the government’s 33-page sentencing memo. He then threw the pipe into the police line, striking another officer.

Didn’t Plan for a Riot

Defense attorney Charles Peterson rejected any notion that Wilson went to the nation’s capital to participate in an insurrection or to be violent. He cited crowd dynamics as a factor that led a peaceful man to “behavior that is aberrant.”

“He’s like so many of the other folks who were there, I think he went there with the best of intentions,” said Peterson, a federal public defender based in Boise, Idaho. “He didn’t go there intending to overthrow the United States government.

“He didn’t go there intending to cause a riot or be involved in a riot.”

He noted that during the violence, Wilson was struck in the head eight or nine times, leading to some memory loss.

“Mr. Wilson has claimed consistently that he doesn’t really have very good recall because he [got] beaten, hit on the head,” Peterson said.

Wilson called to turn himself in when a friend showed him a wanted poster with his photo on it. After a warrant was issued, Wilson surrendered himself on April 16 to the Ada County Sheriff’s Office in Idaho, Peterson said. He is out on bond and will surrender to authorities once he has a prison assignment.

Wilson told the judge he doesn’t remember much from the point when he entered the Lower West Terrace tunnel.

“I looked at some of the videos and I was, [it] was stupid for me to do something like that,” he said.

“I made a very bad decision by going in that place that day.

‘You Made a Terrible Mistake’

Lamberth noted Wilson’s solid upbringing, saying he appears to be a “decent guy” who has “lived a good life” and been “an upstanding citizen.”

“You made a terrible mistake that day,” Lamberth said. “You’ve tried to fess up to it as best you could, but that was a horrible day for our country. … Our country cannot deal with that except under the confines of what we have under the law.”

Gonell gave a victim impact statement to the court, noting injuries he suffered that day required surgeries from which he is still recovering more than a year later. Gonell said Wilson struck him with the plastic pipe during the rioting, and he held up his arms to prevent the pipe from striking another officer.

“The fellow officer behind me, or next to me, did not have a helmet, and I prevented that hit, that officer from being hit with that pipe that he used,” Gonell said. “Both my hands were bleeding by that time from blocking … his blows.”

Gonell said he believes Wilson was intent on more than the mayhem seen in the tunnel.

“He attempted to gain entrance into the U.S. Capitol building as part of his effort to ‘stop the steal,’ overthrow the government in a coup, and subvert the democratic process by stopping the certification of the 2020 presidential election results,” Gonell said.