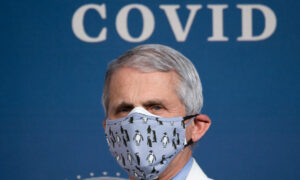 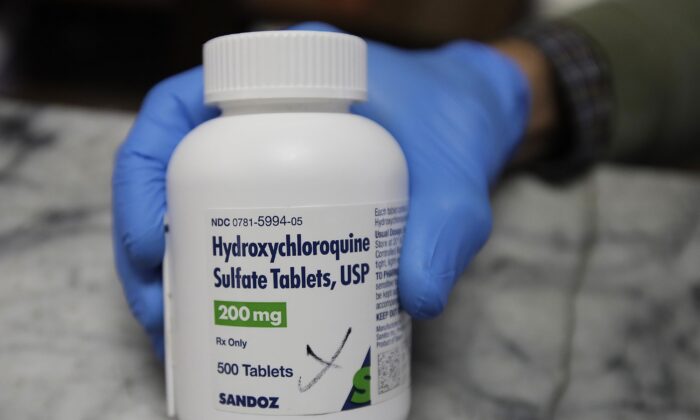 A pharmacist shows a bottle of the drug hydroxychloroquine in Oakland, Calif., on April 6, 2020. (Ben Margot/AP Photo)
PUBLIC HEALTH INFORMATION

Hydroxychloroquine Not Recommended for Prevention of COVID-19: WHO

In a guideline published in the British Medical Journal on March 2, the World Health Organization (WHO) is advising against the use of hydroxychloroquine to prevent infection from the CCP virus, which causes the disease COVID-19.

The WHO assembled an international panel of experts—consisting of physicians, scientists, an ethicist, and four patients who recovered from COVID—to review data of six randomized controlled studies involving 6,059 participants who were or were not exposed to an individual with the CCP (Chinese Communist Party) virus.

They found that hydroxychloroquine had a “small or no effect” on hospitalizations, deaths, and laboratory-confirmed virus infections, and added that the anti-inflammatory drug may have increased the risk of adverse events.

“The panel judged that almost all people would not consider this drug worthwhile,” the authors of the guideline said.

In addition, “The panel considers that this drug is no longer a research priority and that resources should rather be oriented to evaluate other more promising drugs to prevent covid-19.”

Hydroxychloroquine—an anti-inflammatory and anti-malarial drug—was approved by the Food and Drug Administration (FDA) in 1955 to treat and prevent malaria. It is also prescribed for lupus and rheumatoid arthritis.

The FDA “cautions against use of hydroxychloroquine or chloroquine for COVID-19 outside of the hospital setting or a clinical trial due to risk of heart rhythm problems.”

The regulatory agency initially granted hydroxychloroquine an emergency use authorization (EUA) to treat COVID-19 in March 2020 but revoked it on June 25, 2020, because data suggested it was “unlikely to be effective in treating COVID-19.”

Proponents of hydroxychloroquine say that the risk of cardiac adverse effects is low to none when the drug is given at lower doses and with zinc.

“So what did I find about hydroxychloroquine in early use among high-risk outpatients?” Dr. Harvey Risch, MD, PhD, Professor of Epidemiology at Yale School of Public Health said in his testimony (pdf) at the first Senate hearing on early outpatient treatment of COVID-19 on Nov. 19, 2020. “The first thing is that hydroxychloroquine is exceedingly safe.”

“Common sense tells us that this, that a medication safely used for 65 years by hundreds of millions of people in tens of billions of doses worldwide, prescribed without routine screening EKGs, given to adults, children, pregnant women and nursing mothers, must be safe when used in the initial viral-replication phase of an illness that is similar at that point to colds or flu,” he added.

Risch said the seven studies he analyzed on the early use of hydroxychloroquine in high-risk outpatients involving over 11,000 patients “all showed about 50 percent or greater reductions in hospitalization or death” and “not a single fatal cardiac arrhythmia [abnormal heart rhythm] was reported.”

Zinc and hydroxychloroquine must simultaneously be prescribed together for the antimalarial drug to have a better effect in preventing or treating COVID-19, especially in outpatient settings, as zinc blocks the replication of the CCP virus while hydroxychloroquine transports zinc into the cell.

“The virus is inside the cell, the zinc cannot get inside the cell for biochemical reasons, so the hydroxychloroquine opens the door and lets the zinc in,” Dr. Vladimir Zelenko, a primary care physician in New York, told The Epoch Times’ sister company NTD in May 2020.

Zelenko developed his own treatment regime called the Zelenko Protocol consisting of hydroxychloroquine, zinc, and azithromycin to treat COVID-19 patients. He and his team showed that early treatment of COVID-19 patients with his protocol “resulted in five times less hospitalizations and deaths.” The retrospective study involving 141 patients has been peer-reviewed.

In a different retrospective observational study published in the Journal of Medical Microbiology involving 932 patients, scientists found that the “addition of zinc sulphate to hydroxychloroquine and azithromycin was found to be associated with a decrease in mortality or transition to hospice among patients who did not require ICU level of care, but this association was not seen in patients who were treated in the ICU.”

The trials that the WHO panel reviewed all concluded that hydroxychloroquine did not demonstrate any significant benefit in preventing COVID-19. But critics say that the finding is not conclusive since none of the studies included zinc or focused on high-risk patients who are most affected by COVID-19.

Most of the participants were young and healthy in five of the studies with a median age between 33 to 41 years of age. In addition, three of the studies used high doses of hydroxychloroquine leading to higher adverse events in the intervention arm vs the placebo group.

More than half of the studies terminated ahead of their objective date as a result of participants discontinuing their treatments early or there was difficulty in enrolling enough volunteers. There was also a low prevalence of COVID-19 during the time the studies were conducted at the beginning of the pandemic.

Most of the trials also showed that “cardiovascular events” including abnormal heart rhythms from hydroxychloroquine were not observed.

One study that prescribed high doses of hydroxychloroquine in healthy individuals exposed to patients with COVID-19, did not find an increase in cardiac adverse effects. More than 1,400 participants with the mean age of “48.6±19.0 years” were given 800 mg hydroxychloroquine on the first day, followed by 400 mg daily for six days.

The authors said, “the side-effects were mainly gastrointestinal, whereas only 5 of 1,479 events (0.3%) in the hydroxychloroquine group were considered to be heart-related; therefore, our data do not corroborate [with] previously published data on the increased risk of cardiac arrhythmia.”

There are still ongoing and new studies being conducted on hydroxychloroquine on clinicaltrials.gov.

“HCQ is not effective when used very late with high dosages over a long period (RECOVERY/SOLIDARITY), effectiveness improves with earlier usage and improved dosing,” according to c19study.com that tracks clinical trials on hydroxychloroquine around the world.