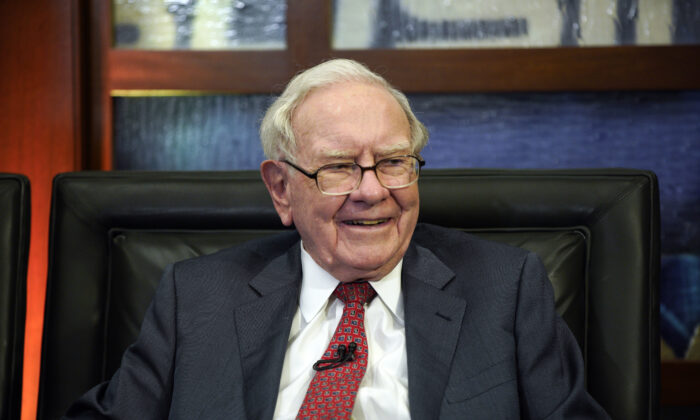 Berkshire Hathaway Chairman and CEO Warren Buffett smiles during an interview in Omaha, Neb., on May 7, 2018, with Liz Claman on Fox Business Network's "Countdown to the Closing Bell." (Nati Harnik/AP Photo)
By Andrew Moran

Wall Street is almost certain that the U.S. economy will slip into another recession in 2023. However, market analysts have different opinions on what the financial markets will look like over the next 12 months.

Goldman Sachs slashed its target for the benchmark S&P 500 Index, to 3,600, projecting another 4 percent drop ahead. The Royal Bank of Canada anticipates a stock market bottom in the coming weeks, with a rally in equities in 2023. A Bank of America fund survey suggests full capitulation, carving out a path for a stock market rally in 2023 after the Federal Reserve pivots on interest rates.

So, how should investors trade this market over the next year, according to some of the most prominent names on Wall Street?

“We printed up too much money, and just thought the party would never end. And the party’s over,” he said.

While his stock market outlook isn’t bullish, predicting that “the worst is yet to come,” he was asked what opportunities he sees in the equities arena. He offered two stocks: CVR Energy and CVR Partners.

The former is an energy company that has rallied about 124 percent year to date, while the latter is a fertilizer firm that has climbed approximately 48 percent this year.

“[The] fertilizer business, to me, is a great business today,” Icahn said. “You need fertilizer if you want to eat.”

But perhaps Icahn’s best trade in 2022 might have been Twitter. According to Bloomberg, the billionaire investor bet on Elon Musk’s acquisition of the social media outlet, anticipating that he would be unable to back out of his $44 billion takeover bid. Reportedly, Icahn purchased a $500 million stake when the stock was trading at around the mid-$30-a-share range. He profited nearly $250 million as a result of the stock’s rise, according to media reports.

Whether the stock market has further to fall or is poised for a rally depends on the Federal Reserve and investors’ expectations surrounding monetary policy, said Arthur Laffer Jr., president of Laffer Tengler Investments.

“I think, overall, the stock market is going to do pretty well,” he told The Epoch Times. “I mean, historically speaking, stocks actually do well, on a relative basis, over inflationary periods.”

According to Laffer, the equities arena will be adjusting to a “stock pickers’ market,” whereby picking individual stocks is a top strategy. Balance-sheet investing, Laffer noted, will also turn into a crucial investment strategy for traders.

“When you get markets like this, there’s a big difference between owning higher-quality stocks versus lower-quality stocks,” he said, adding that value stocks do well, but investors can’t get in “too deep” because they can also get crushed.

Ultimately, today’s environment is vastly different from what it was in, say, the 1970s, particularly because corporations possess a lot more information than they did 50 years ago. This allows companies, from Procter & Gamble to Microsoft, to model different scenarios and respond to the climate faster.

“This is where management really makes a difference,” Laffer noted, “and their balance sheets really matter.”

Bill Ackman, another notable investor and the CEO of Pershing Square Capital Management, told CNBC in September that he believes the annual inflation rate will fall to 3.5 percent to 4 percent in a year, adding that the “buy signal” will happen sometime in 2023.

Ackman may not have publicly recommended any investment strategies, but his $7.46 billion investment fund made plenty of adjustments in the first and second quarters.

With consumer demand slowing, Ackman might be preparing for the service sector to take a hit amid a possible economic downturn in 2023.

It’s no secret that Peter Schiff, the president and CEO of Euro Pacific Capital, is a gold bug. The most recent 13F filing from the second quarter suggests that his firm increased its holdings in Barrick Gold, Agnico Eagle Mines, Royal Gold, and Pan American Silver.

But Schiff has also recommended investing in recession-proof assets, particularly in companies that “sell products and services consumers have to buy, not just what they want to buy.” Food, crude oil, and tobacco are just some examples, according to Schiff. Euro Pacific Asset Management built more positions in British American Tobacco, Philip Morris International, Shell, BP, and Kellogg in the second quarter of this year.

Still, with inflation as high as it is, Schiff thinks investors need gold for protection.

“[W]hat a lot of people don’t realize about gold is that it’s money. It is liquidity. It’s everything else that loses value in relationship to gold. Gold is a better form of money than anything governments have come up with to replace it,” he told Fox Business earlier this month.

“A simple rule dictates my buying,” Warren Buffett wrote in a 2008 op-ed in The New York Times. “Be fearful when others are greedy, and be greedy when others are fearful. And most certainly, fear is now widespread, gripping even seasoned investors.”

The legendary investor and the “Oracle of Omaha” hasn’t been a fan of panicking during meltdowns or diversifying by buying a bunch of stocks.

So, he could be staying the course and relying on companies with strong balance sheets that pay steady dividends.