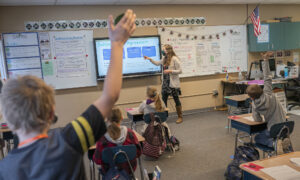 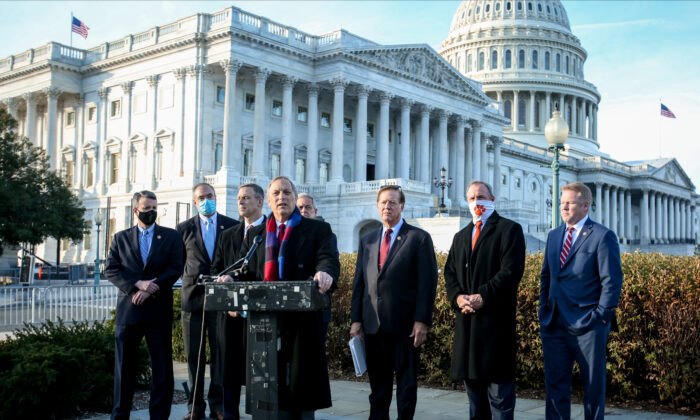 Rep. Andy Biggs (R–Ariz.) speaks alongside members of the House Freedom Caucus during a press conference outside the Capitol building in Washington on Dec. 3, 2020. (Charlotte Cuthbertson/The Epoch Times)
Congress

“CRT training, which teaches that America is fundamentally racist country and that individuals, by virtue of their race, are inherently racist or oppressive, is a direct violation of federal law,” said the group, which is composed of some of the most conservative members of the lower chamber of Congress.

“All federal employees, in statute, are guaranteed to receive fair and equitable treatment in all aspect of personnel management without regard of race or sex,” it said. “CRT training is out of step with the law and our values and we will not stand by and watch this insidious and deliberately divisive ideology become a normal part of government.”

Specifically, the bill would ban “any entity” from using federal funds to teach or promote certain ideas, including the belief that any race is inherently superior or inferior to any other race, that the United States and its founding documents are fundamentally racist, that a person’s race determines his or her moral worth, that a person is inherently racist or oppressive because of his or her race, or that people bear responsibility for actions committed in the past by other members of the same race.

The announcement comes amid an effort by progressive politicians, activists, and major teachers’ unions to incorporate concepts of CRT in American schools. Facing backlash from parents and state governments, CRT proponents are now simultaneously claiming that CRT isn’t being taught to K-12 students, while defending the presence of the ideology in the classroom.

This talking point was echoed by Rep. Alexandria Ocasio-Cortez (D-N.Y.), who said last week that although CRT is taught only in some law schools, teachers should be armed with CRT and become “fluent in how to dismantle racism.”

Ocasio-Cortez, the face of the Democratic Party’s progressive wing, said in an interview with CNN that teachers need to be “fluent in anti-racism” so that they can train children away from racial biases, which she claimed to start accumulating since infant age.

“So your child’s teacher is anti-racist and is actually fluent in how to dismantle racism and the dynamics of racism in a classroom. That is something that teachers should know how to do and Republicans are trying to ban this, are trying to ban us from knowing our own history,” the congresswoman said.