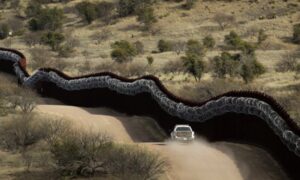 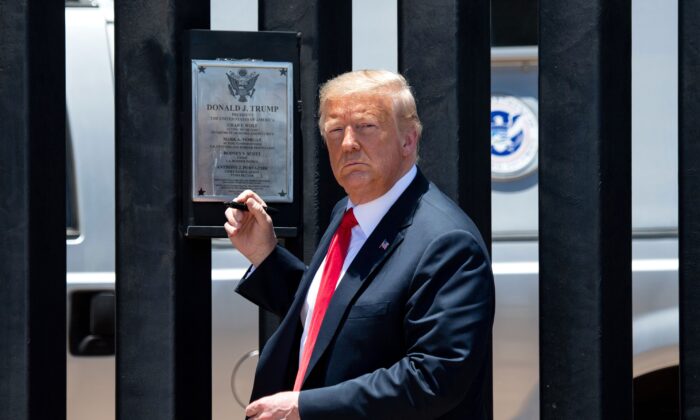 President Donald Trump looks on before signing a plaque as he participates in a ceremony commemorating the 200th mile of border wall at the international border with Mexico in San Luis, Ariz., on June 23, 2020. (Saul Loeb/AFP via Getty Images)
Trump Administration

A federal appeals court has ruled that House Democrats can sue the Trump administration for diverting $2.5 billion in Pentagon funds to build a wall along the border between the United States and Mexico.

In the newest salvo in a legal battle over the border wall, the DC Circuit Court of Appeals ruled on Friday that congressional lawmakers can proceed with a lawsuit that would seek to assert Congress’s authority to appropriate funds.

Since taking office, President Donald Trump has demanded that Congress fund construction of a wall on the southern border—his landmark campaign promise. After a congressional spending bill allocated around $1.3 billion for border security, falling short of the nearly $5 billion Trump requested for the wall, he declared a national emergency and by its authority reallocated $2.5 billion in defense and military project funding appropriated by Congress, sparking several lawsuits.

In June, a federal appeals court in California ruled against the Trump administration in the $2.5 billion transfer, ruling it sidestepped Congress illegally. The court ruled that the administration violated the Appropriations Clause of the Constitution, which states that “No money shall be drawn from the treasury, but in consequence of appropriations made by law.” Despite the California court’s ruling of the administration’s financing maneuvers as unconstitutional, the Supreme Court has allowed the $2.5 billion to be spent while the appeals process winds its way through the courts.

A separate legal process adjudicated before federal courts in Washington culminated in Friday’s 7-2 decision. Judges Thomas B. Griffith and Karen LeCraft Henderson were the two dissenting voices, arguing that courts should not take sides in political disputes, according to the Washington Post.

“This court ruling confirms what we already knew,” Rep. Sylvia Garcia (D-Texas) said in a tweet commenting on Friday’s decision. “The Trump Administration’s diversion of Pentagon funds for the construction of his #BorderWall was an illegal encroachment on Congress’ power of the purse.”

“There will not be another foot of wall constructed in my administration,” Biden said, adding that he would instead have border protection based on “high-tech capacity to deal with it and at the ports of entry, that’s where all the bad stuff is happening.”

Trump’s emergency declaration was made at a time when the United States saw a surge of illegal immigrants entering the country across the southern border, overwhelming the immigration system and facilities. Drug smugglers and cartels were also taking advantage of the porous border to smuggle vast amounts of narcotics into the country.

In ruling that the House Judiciary Committee can proceed with its lawsuit, the DC court has effectively sent the case back to a lower court.

Justice Department spokeswoman Kerri Kupec said the administration would continue to seek dismissal of the case, saying, “we intend to vigorously press those arguments before the panels hearing those cases.”

The administration could eventually appeal the outcomes all the way to the Supreme Court.