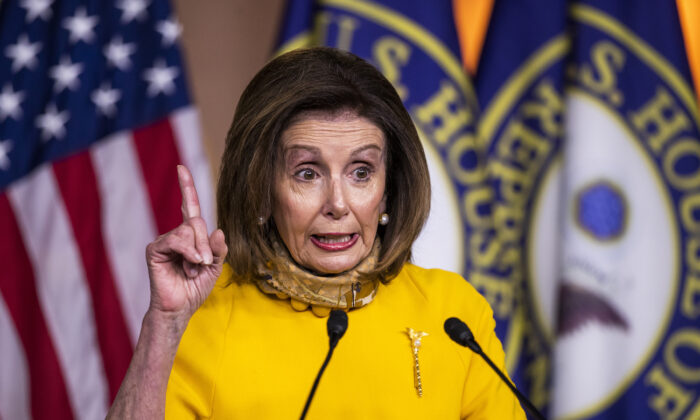 House Committees to Review Senate-passed Bill That Could Delist Some Chinese Firms: Pelosi

House Speaker Nancy Pelosi (D-Calif.) said on Thursday that she will ask some House committees to review a bipartisan bill passed by the Senate which could delist some Chinese companies from the U.S. exchanges.

“We’ll review it in the House,” she said during an interview with Bloomberg Television. “I’ve asked my committees to take a look at what it is.”

The Senate passed the legislation by unanimous consent on Wednesday that would require Chinese companies to comply with U.S. auditing and reporting standards or face exclusion from U.S. stock exchanges. It would apply to those listed on American exchanges or raising capital in the country.

The Holding Foreign Companies Accountable Act, sponsored by Sens. John Kennedy (R-La.) and Chris Van Hollen (D-Md.), would bar securities from Chinese companies from being traded on national exchanges if the PCAOB is unable to inspect their audit books for three consecutive years.

Companies whose audits cannot be inspected by the board would also have to establish that they are not owned or controlled by a foreign government.

“I do not want to get into a new Cold War,” Kennedy said on the Senate floor. “All I want—and I think all the rest of us want—is for China to play by the rules.”

When asked about her plan for the Senate-passed bill, Pelosi firstly highlighted her records of decades in criticizing the Chinese regime’s trade policy, human rights records, and Hong Kong policies.

“That takes second place to no one in the Congress, House or Senate, in my criticizing of China,” she said.

However, she emphasized that the United States need to maintain a relationship with China.

“It’s interesting that it has such unanimous support, though, in the Senate,” she added.

The Senate bill passed amid mounting pressure to increase the scrutiny of Chinese firms.

President Donald Trump told Fox Business on May 14 that his administration is looking “very strongly” into this issue. But he noted a drawback to increasing oversight would be that these companies would simply say, “Okay, we’ll move to London or we’ll go to Hong Kong.”