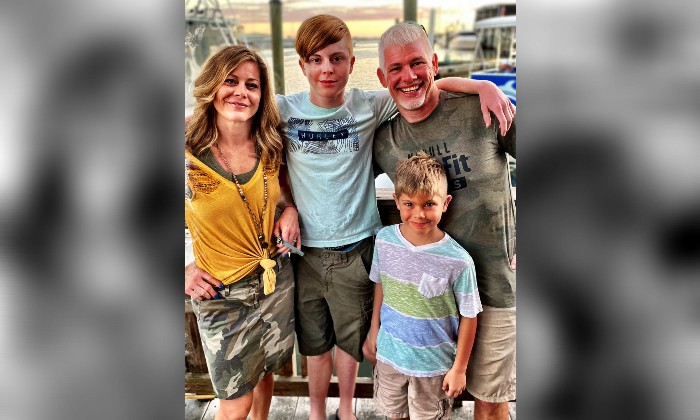 Dane Donaldson (R), with his wife Jenn and sons Ryder (C) and Tanner, who is 9 years old and requires a kidney transplant. (Courtesy of Dane Donaldson)
By Alice Giordano

A 9-year-old boy is being denied a life-saving kidney transplant because his father is not vaccinated against COVID-19.

Dane Donaldson was found to be a perfect match for his son Tanner back in early 2018 by the Cleveland Clinic Children’s Hospital before the outbreak of the pandemic.

The family decided to wait a little longer before having Tanner undergo the transplant since transplanted kidneys from a live donor only lasted about 20 years.

Then COVID-19 hit and put a freeze on the procedure.

Now the hospital is refusing to perform the life-saving father-to-son kidney transplant it agreed to do nearly four years ago over the senior Donaldson’s unvaccinated status.

In a statement released to The Epoch Times, the Cleveland Clinic cited a 2021 policy it adopted requiring all donors and candidates for organ transplants to be fully vaccinated against the virus.

“Individuals who are actively infected with COVID-19 have a much higher rate of complications during and after surgery, even if the infection is asymptomatic,” the hospital stated.

Donaldson, who is in the insurance business, told The Epoch Times he is opposed to the COVID-19 vaccine for religious reasons, but also because he has seen a rising number of clients get critically ill after receiving it.

He believes the hospital is contradicting itself by requiring a living donor to be vaccinated, but not a deceased one.

“I asked them in that car accident victim, would you vaccinate him on the way to the hospital to rip his kidney out and they said ‘no’,”  Donaldson told The Epoch Times.

Donaldson said he even offered to sign a waiver freeing the hospital from any liability should either himself or his son develop COVID-19. At the same time, the hospital has refused to agree to take any responsibility for any side effects that he or his son experienced from the vaccine.

The hospital, he said, is blowing the chance of a lifetime for his son.

“A live donor is the best donor for kidneys,” said Donaldson, “but they’ll take a kidney from a deceased person not vaccinated, it makes no sense.”

The Cleveland hospital agreed that live donors are the best source for kidney transplant recipients, but emphasized that they were “not without risks”—noting that there is medication kidney transplant patients must take that compromises the immune system.

“We continually strive to minimize risk to our living donors, and vaccination is an important component to ensure the safest approach and optimal outcomes for donors,” it stated.

Donaldson said he and his wife Jenn are now in the process of finding another hospital to perform the transplant. They had wanted to stay with the children’s hospital because it has been treating his son since birth.

Tanner was born with compromised kidneys due to a rare birth defect that caused irreversible kidney damage in utero and resulted in stage 4 chronic kidney disease as well as bladder and urinary dysfunctions.

He now has only 18 percent function left of his kidneys, according to Donaldson.

The Donaldsons join a number of other publicized cases of U.S. hospitals that have refused to perform organ transplants because either the donor or recipient was not vaccinated.

Last month, The Epoch Times covered the story of an Air Force veteran who was denied a kidney transplant because he was refusing the vaccine.

Chad Carswell had only 4 percent kidney function left when the Atrium Health Wake Forest Baptist Medical Center in Winston-Salem, North Carolina, refused to keep him on their candidate list for a donated kidney.

Fortunately, after his story went public the Medical City Fort Worth Transplant Institute in Texas offered to put Carswell on their recipient list for a kidney. His attorney Adam Draper said that as of April 3, Carswell was still in need of a match for the transplant.

In January, attorneys for the conservative organization Informed Consent Action Network (ICAN) wrote a seven-page letter to the Cleveland Center requesting it reconsider the decision, and also the science behind it.

“Presently, it appears the hospital is operating under a psychosis of flawed morality in choosing to sacrifice the health and wellness of its 9-year-old patient in exchange for what it perceives to be the ‘greater good,'” ICAN’s lawyers Aaron Siri and Elizabeth Brehm wrote.

ICAN also called the hospital irrational because the entire family, including Tanner and his older brother, all had COVID-19 and recovered from it, meaning they have natural immunity.

In its letter to the hospital, ICAN cited a number of international studies that showed that re-infection of COVID-19 after recovering from the virus was rare.

Of the studies it cited was one performed by Cleveland Clinic itself.

In the study, the hospital looked at SARS-CoV-2 (the virus that causes COVID-19) infections in 52,238 vaccinated and unvaccinated health care workers over a five-month period.

It found that none of the previously infected healthcare workers who remained unvaccinated contracted SARS-CoV-2 over the course of the research despite a high background rate of COVID-19 in the hospital.