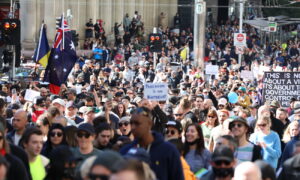 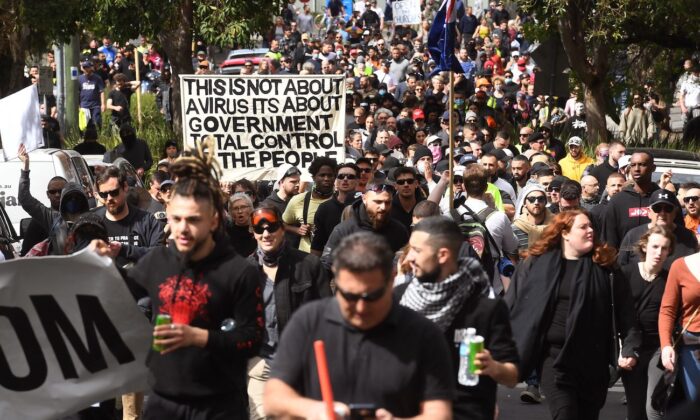 Protesters march through the streets during a rally against government COVID-19 restrictions in Melbourne on Sept. 18, 2021. (William West/AFP via Getty Images)
Australia

Australians across major cities on Saturday voiced their dissent against draconian government COVID-19 measures, with thousands of protesters in the cities of Melbourne, Brisbane, Perth, and Adelaide, taking to the streets in “Freedom Rally” demonstrations.

But heavy police presence, mainly in Melbourne and Sydney, resulted in some violent clashes and multiple arrests.

In Victoria state’s capital, Melbourne, some 1,000 protesters gathered in various groups in the suburb of Richmond around midday, after the location was changed last minute to evade police.

Over about two hours, the groups proceeded to the suburb of Hawthorn via residential streets, while demanding an end to government vaccine mandates, as well as weeks of draconian lockdowns and restrictions. The city had entered its sixth lockdown on Aug. 5.

Crowds chanted “no more lockdown” and “sack Dan Andrews,” referring to the state’s premier, while facing a line of police officers at the intersection of Church Street and Bridge Road.

Video on the day showed police spraying protesters with pepper spray, sometimes unprovoked. Protesters can also be seen throwing projectiles such as bottles at police officers.

In one widely-reported incident, a crowd of protesters pushed through a police line and continued down the road. Scuffles and violence ensued between police and protesters, video showed, with a few men dressed in all-black appearing to target and attack police officers directly. Some protesters fell in the stampede while police deploy pepper spray at close range on others surging forward.

In a separate incident, police officers in a line surged toward protesters and media members. Video footage from Rebel News captured a police officer pushing a woman to the ground. As she fell backward on the ground, another officer deployed pepper spray to her face.

Victoria Police arrested a total of 235 people on the day, with the vast majority of the charges for breaching health orders and some for assaulting police and riotous behaviour.

Ten officers were injured amid a number of brief clashes with protesters in Melbourne. Among them, six required hospitalisation, according to Victoria police.

Public transport and ride shares into Melbourne’s central business district (CBD) had been temporarily suspended on Saturday, with some 2,000 police officers deployed to set up various checkpoints and barricades on main roads in efforts to prevent large gatherings.

No Large Gatherings in Sydney

Large gatherings in Sydney’s CBD were non-existent amid heavy police presence in the city, which included riot squad officers, highway patrol, and detectives.

New South Wales police arrested 32 people and issued 265 fines on Saturday in their operation to quash unauthorised protests. Of those, 232 arrests and 20 fines were from metropolitan Sydney, with some of the fines for those who allegedly sought to attend the protest by travelling on public trains, NSW Police Assistant Commissioner Peter Thurtell said, reported SBS News.

NSW Police had issued a warning on Friday threatening fines and arrests if anyone dared to participate in protests. On Saturday, about 1,700 police officers were deployed across the state—1,500 in metro Sydney, and 200 regional areas including Tweed Heads, Byron Bay, Central Coast, Wollongong, and on the South Coast.

In Brisbane, Queensland’s capital, thousands of people gathered in the city centre’s Botanic gardens at midday before marching through the streets in a loud but peaceful fashion. Separate video footage showed protesters chanting “my body, my choice” as they proceeded down Brisbane’s George street. The protest persisted until at least 3 p.m.

Some violence broke out during the day after police arrested a man. Video showed protesters clashing with police and chanting loudly, “let him go.” Police said the 55-year-old man was charged after he was flying a drone in a restricted area, reported the Brisbane Times.

In Adelaide, the capital city of South Australia, some hundreds of protesters gathered in Rundle Park to express dissent over government vaccine and mask mandates.

A video showed people gathered in the park for speeches. Following the gathering, the protesters moved on to North Terrace with a police escort, reported 9News. Footage of people parading through the park showed a sign that said, “When injustice becomes law, resistance becomes duty.”

In Western Australia, thousands of protesters in the state’s capital Perth gathered and marched through the city centre, reported The West Australian.

“You cannot comply your way out of tyranny,” another sign read.

A seven-minute video posted on Telegram showed hundreds to thousands of protesters peacefully walking down a street in Perth’s CBD.

After the march, thousands gathered at Forrest Chase, a major shopping outlet in the CBD, where some speakers took to the stage to denounce government vaccination mandates on health care workers. One video showed the large crowd repeatedly chanting “freedom.”

“What’s happening to us at the moment, as healthcare workers … they have been restricted, we’ve got a directive by October 1, we cannot step into our workplace anymore if we refuse to take the vaccine,” one nurse told the crowd, reported The West Australian.