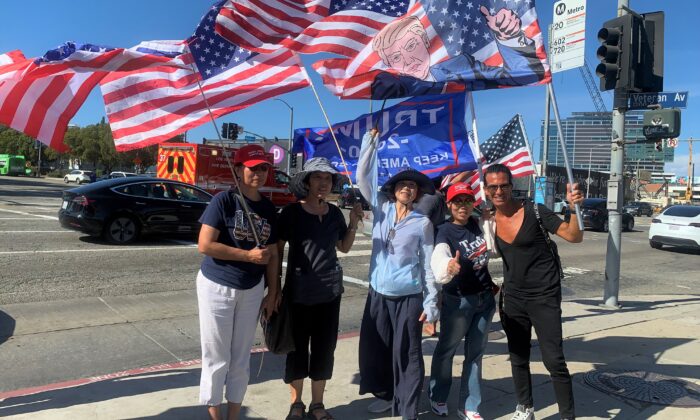 Jackson Elliott
Reporter
Jackson Elliott reports on small-town America for The Epoch Times. He learned to write and seek truth at Northwestern University. He believes that the most important actions are small and that as Dostoevsky says, everyone is responsible for everyone and for everything. Contact Jackson by emailing jackson.elliott@epochtimes.us
View profile
Follow
biggersmaller
Print

Unless trust is restored, the FBI’s Mar-a-Lago raid may begin the “collapse” of U.S. law enforcement, according to police expert Michael Letts.

Over the past few years, the FBI has acted politically often enough that many Americans now struggle to trust it, Letts said. He runs In-Vest USA, a nonprofit that provides bulletproof vests to police departments.

Without explanations, acts such as the Mar-a-Lago raid create distrust between local and federal law enforcement, he said. They also create civilian distrust for law enforcement in general.

“Mar-a-Lago is just another nail in the coffin,” he said.

U.S. law enforcement runs on trust, according to Letts. Without trust, the system collapses into “Third-World status,” where police serve power instead of enforcing the law.

“Then, you have coup d’états, you have overthrows, riots. And then, whatever power happens to win at that particular day tries to solidify. The forces that it controls run out and eliminate everybody that’s not on their bandwagon,” he said.

The FBI made several decisions at Mar-a-Lago that could catastrophically damage trust in law enforcement, Letts said.

First, the raid itself shouldn’t have happened, he said.

Presidents often take many documents with them when they leave the White House. Often, staff accidentally pack at least a few secret documents by mistake. Most of the time, the federal government doesn’t punish this mistake, according to Letts.

“More often than not, they look at and realize [the document] no longer needs to be classified anymore,” he said.

But the FBI raided Trump’s home for the documents.

The FBI also refused to let Trump’s lawyer observe the search. Without someone else present, law enforcement could potentially plant fake evidence or steal a suspect’s property, Letts said. This has led many to now wonder whether the FBI demanded secrecy for alleged misconduct.

“They should have never provided fodder to the American people to have these kinds of questions,” he said.

Finally, FBI and DOJ leaders have failed to provide the public with a clear explanation as to why the raid had to happen.

Although the government released the warrant and receipt for property taken, these things didn’t provide enough of an answer, Letts said.

Since then, reports have been spreading about an internal FBI and Department of Homeland Security bulletin, leaked in part by CNN, NBC, and CBS, of an increase in bomb threats made online to law enforcement and officials following the Mar-a-Lago raid.

If the government truly wants to calm the situation, it needs to provide a full explanation, according to Letts.

“We need straight and direct answers,” he said. “We need congressional leadership. It needs to be a bipartisan effort.”

Trust: Cornerstone of the American System

The distrust from the FBI raid doesn’t only affect politics, Letts said. It also affects the inner workings of law enforcement.

Law enforcement agencies have to cooperate to do their work, he said. Federal and state police often join forces for investigations.

In these investigations, trust is crucial, according to Letts. If the FBI and local police don’t trust each other, they can’t cooperate.

Even law enforcement on drug dealing will fall apart if the FBI and police don’t trust each other, he said. If the FBI targets conservative politicians today, it might target anyone tomorrow.

The FBI’s Mar-a-Lago raid will also cause the public to distrust state and local police, as most of the time, the public doesn’t see the difference between local police, state police, and federal law enforcement, according to Letts.

“If anybody’s wearing a badge—sheriff, deputy, city police—they all get mixed into the same boat,” he said. “And now they all get vilified.”

In the past few years, law enforcement’s trust foundations have been weakened from a number of events, Letts said. Some media outlets have villainized them for alleged racism, which the police deny, during deaths in custody, while some city councils have cut their budgets. Officers faced immense pressure from all angles during the COVID-19 pandemic. Many police officers have resigned; few are recruited.

“They’re having to pull extra shifts. They’re at the highest stress rates. I mean, look at their divorce rates. They have some of the lowest morale we’ve ever seen in history,” he said of the police.

At some point, the “thin blue line” will snap, according to Letts.

“Who will they call when somebody is banging on their door to try to break in?” he asked.

Jackson Elliott
Reporter
Follow
Jackson Elliott reports on small-town America for The Epoch Times. He learned to write and seek truth at Northwestern University. He believes that the most important actions are small and that as Dostoevsky says, everyone is responsible for everyone and for everything. Contact Jackson by emailing jackson.elliott@epochtimes.us