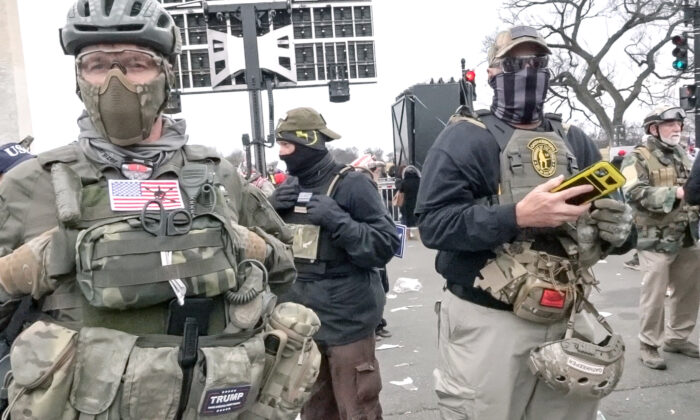 Members of the Oath Keepers walk from President Donald Trump's speech to the U.S. Capitol on Jan. 6, 2021. (Luke Coffee/Screenshot via The Epoch Times)
By Zachary Stieber

Zachary Stieber
Reporter
Zachary Stieber is a senior reporter for The Epoch Times based in Maryland. He covers U.S. and world news.
View profile
and Joseph M. Hanneman

The U.S. government has acknowledged for the first time that five FBI confidential informants were involved with the Oath Keepers on Jan. 6, 2021, but prosecutors failed to disclose that none of the sources provided evidence of guilt, a defense lawyer said on Sept. 26.

FBI officials have repeatedly declined in congressional hearings to say whether there were agents or confidential human sources (CHS) in the crowd when the U.S. Capitol was breached on Jan. 6. But in pretrial communications in the Oath Keepers’ seditious conspiracy case, prosecutors disclosed that there were five sources informing on the Oath Keepers, David Fischer, who is representing defendant Thomas Caldwell, said in the new filing.

“What the Government knew—but only recently disclosed to the Defendants—was that none of the CHSes provided evidence of guilt on the part of the Oath Keepers as an organization, or the individual Defendants in this case,” Fischer said.

He said the fact was confirmed by the government telling defense lawyers that only one of the informants will take the stand during the Sept. 27 trial of former Oath Keepers leader Elmer Stewart Rhodes III and four others, including Caldwell.

Top FBI officials have declined to answer questions on how many, if any, informants were at the Capitol around the time of the breach.

But prosecutors in a recent motion disclosed that multiple sources have been involved in the investigation into the Oath Keepers, a group comprised of former and current members of the military, law enforcement, and first responders.

“At trial, the government or defense may call to testify certain CHSes who were either involved in the investigation that led to prosecution of the defendants, or who became CHSes subsequent to the initiation of the instant investigation,” prosecutors said in the motion, which asked U.S. District Judge Amit Mehta, an Obama appointee overseeing the case, to impose a protective order.

“The protections requested herein, while minimally restrictive, would ensure the integrity of any ongoing investigations and would reduce the security threat posed to any testifying CHSes,” prosecutors said in the filing, which has not yet drawn a ruling from Mehta.

Prosecutors contend that Rhodes and his co-defendants engaged in a seditious conspiracy to attack the Capitol on Jan. 6 and prevent the counting of Electoral College votes for the 2020 presidential election.

The federal indictment charges the Oath Keepers with stockpiling firearms in a Virginia hotel for use by quick-reaction forces to attack the Capitol. Rhodes has said the weapons were legal and for use only if President Donald Trump invoked the Insurrection Act and raised a militia to guard against Antifa.

None of the informants, however, reported the existence of a “Rhodes Plan” and all of the sources have denied knowing any information about it when questioned by FBI handlers after Jan. 6, 2021, Fischer said, citing disclosures by the government to defense lawyers.

“The potential testimony of these CHSes, along with the corroborating testimony of their FBI handlers, will establish either 1) that the ‘Rhodes Plan’ was so secret that even members of Oath Keeper leadership who interacted regularly with Defendant Rhodes and others alleged to have been involved were kept in the dark both before and after January 6, or 2) that there never was any such ‘Rhodes Plan,'” the defense lawyer said.

“The defendants are entitled to examine the totality of the Government’s investigation and prosecution for the purposes of undermining the jury’s confidence in the work done and the conclusions reached by the agents and prosecutors over the course of the past 20 months,” Fischer added.

The FBI chose to ignore the exculpatory information and has, with prosecutors, “’reverse-engineered’ the existence of such a ‘plan’ through selective use of ‘evidence’ it has cherry-picked out of context, while ignoring all evidence to the contrary,” the filing states.

The FBI has declined to comment on court cases, referring requests for comment to the Department of Justice, which has said it doesn’t comment on ongoing cases.

The FBI chooses to use CHSes knowing that the sources might be cross-examined by defense lawyers in criminal cases and defendants want to probe “relevant information,” such as the reliability and accuracy of information that originated with a CHS, Caldwell’s lawyer said.

“The Defendants, moreover, do not intend to elicit testimony from a CHS for the sole purpose of exposing the CHS to possible retribution or otherwise place his or her safety at risk. However, given the physical proximity of certain CHSes to the Defendants, cooperators, and unindicted co-conspirators in this case, it is unrealistic to seek to prevent the geographic location of a testifying CHS from becoming known as a result of testifying in this case,” Fischer added.

The piece in the government motion on preventing questions on the FBI CHS program also runs counter to the Supreme Court’s ruling in Kyles v. Whitley, according to the defense. Lawyers want Mehta to reject that and all other portions of the government’s motion.