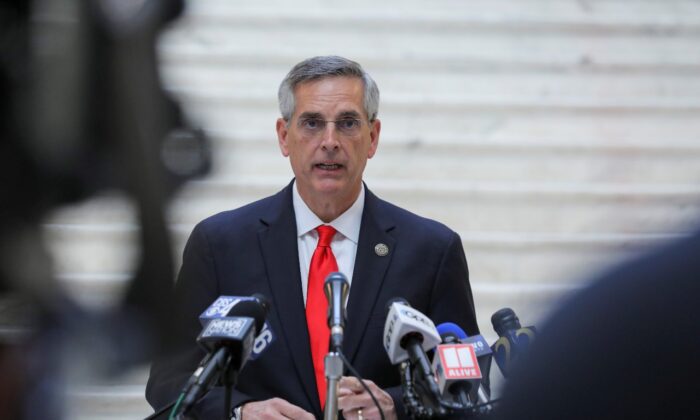 Georgia Secretary of State Brad Raffensperger gives an update on the state of the election and ballot count during a news conference at the State Capitol in Atlanta on Nov. 6, 2020. (Reuters/Dustin Chambers)
Georgia

Georgia Secretary of State Brad Raffensperger was evacuated from the state Capitol building on the afternoon of Jan. 6 after protesters gathered near the parking deck, according to ABC News.

The Atlanta Journal Post (AJP) reported that Georgia Capitol police escorted Raffensperger and his staff after protestors attempted to enter the building to deliver written grievances about the November elections.

”We heard reports of threats and left immediately,” said Deputy Secretary of State Jordan Fuchs, according to AJP.

AJP told ABC News that the protesters were members of a militia.

Earlier in the afternoon, a small group of Trump supporters had gathered outside the Capitol grounds to protest alleged election fraud in a “Stop the Steal” rally. Protesters, some of whom carried assault-style weapons, were peaceful, AJP reported.

The development occurred as protesters stormed the Capitol Building in Washington, clashing with police. The breach forced Congress to go into lockdown, halting deliberations in both Chambers on objections to the electoral votes from the presidential election.

Earlier in the day, thousands attended a pro-Trump rally contesting the results of the 2020 election. Trump has deployed the National Guard to quell the protestors and urged them to “go home.”

Meanwhile, in the Senate runoff elections, it appears that Democrats Raphael Warnock and Jon Ossoff have beaten Republicans Kelly Loeffler and David Perdue.

With 98 percent of the vote counted by the afternoon of Jan. 6, Warnock led Loeffler by 1.5 percentage points and Ossoff led Perdue by 0.6 percentage points, according to Edison Research. Both are expected to win beyond the margin that would require a recount.