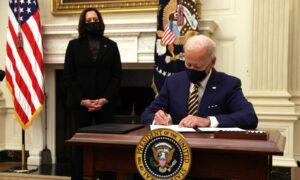 Saltz, who participates in the highest level of U.S. intercollegiate athletics known as NCAA Division I, said Feb. 27 that her views don’t stem from a desire to discriminate against transgender women, but rather from the belief that accommodating for LGBTQ athletes shouldn’t come at the expense of destroying women’s sports and the dreams of biological female athletes.

“We use this trigger word ‘inclusion,’ but people don’t realize that by being inclusive, in that sense, it is exclusionary to people like myself. And so we don’t want men’s and co-ed sports, we want men’s and women’s sports. And that’s why there is the separation of sex within sports as well,” said Saltz, who was a guest speaker on a panel at the annual conservative conference, held in Orlando this year.

“And so I think that gender identity doesn’t erase physiological advantages. And that’s just something we have to remember.”

The issue of saving women’s sports has again come into the public consciousness following the House’s passage of the Equality Act. Democrats and some Republicans say the bill is necessary to address discrimination against individuals on the basis of sexual orientation and gender identity. The bill seeks to classify “sexual orientation” and “gender identity” as protected classes under federal law while expanding protections for LGBTQ individuals in public spaces and services.

But critics and religious freedom advocates argue that its application could instead result in discrimination against religious institutions, people of faith, women, and individuals who wish to subscribe to traditional views of gender and sexuality, and exclude dissenters from the public square.

The Equality Act now heads to the 50–50 split Senate, where it faces an uphill battle.

Rep. Rhonda Milstead, a Republican member of the South Dakota House of Representatives and another guest speaker on the panel, said that a true Equality Act can only work if you ensure that fairness is applied across all levels. In her example of women’s sports, she said equality can only be achieved if the athletes are equal biologically and have similar levels of strength and endurance.

Read More
The Equality Act and the Orwellian World of Gender Ideology
The Two Kinds of Equality
If Equality Is Important, Why Aren’t Feminists Pushing for It in Every Field, Not Just STEM?

“Just because you might identify as something else doesn’t make you equal. So we have to recognize equal for what it is, and then the Equality Act can work. But we can’t make it mean something it doesn’t,” Milstead said.

Saltz said that forcing biologically female athletes, who put extensive sweat and effort to train in the sport they love, to compete with biological men would result in less competitive women’s sports, see fewer female athletes, and cause current female athletes to lose motivation due to the perceived unfairness.

“I feel as if women are going to be watching their own sports from the sidelines, we’re no longer going to be wanting to compete in sports where we don’t feel as if we’re competing on a level playing field,” Saltz said.

“And if we’re allowing biological males that possess physiological advantages over biological females to compete in the female category, we’re no longer going to be interested in competing.

“The reason that I decided to speak out about something like this is because fairness in women’s sports is so important to me.”

Some states have passed or are looking into passing legislation that would bar transgender athletes from girls’ and women’s sports. South Dakota’s House of Representatives this week approved a bill that aims to ensure fairness in girls’ sports; the measure advances to the state Senate.

“I don’t think that’s the message we want to send to any child in this country,” she said.