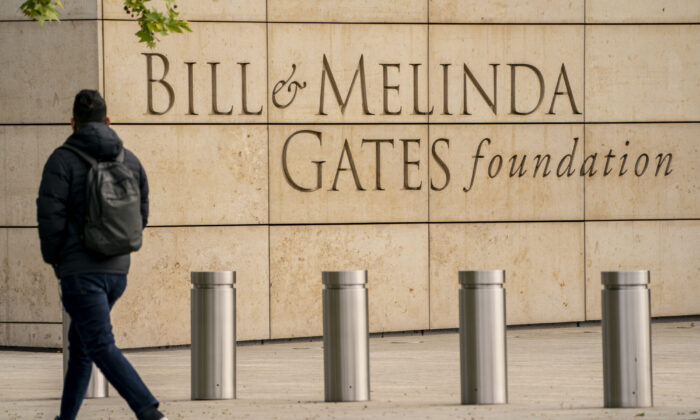 A pedestrian walks by the Bill & Melinda Gates Foundation in Seattle, Wash., on May 4, 2021. (David Ryder/Getty Images)
WORLD

The Bill & Melinda Gates Foundation, in its COVID-19 response, will fund up to $120 million to ensure access in lower-income countries to Merck & Co.’s experimental oral drug, the foundation announced on Oct. 19.

The funding will support efforts to develop and produce generic versions of what could become the first oral antiviral medication for the disease if it wins regulatory approval, according to a statement from the foundation.

“Merck has taken important steps to make this drug available as a COVID-19 therapy, including negotiating licenses with generics manufacturers to increase supply. We are pleased to work alongside these efforts to ensure affordability and availability in lower-income countries,” said Bill Gates, co-chair of the foundation.

The tablet medicine, dubbed “molnupiravir,” is being developed by pharmaceutical company Merck and is meant to combat cases of mild or moderate CCP (Chinese Communist Party) virus, which causes COVID-19.

Earlier this month, an interim analysis of its phase 3 trial studying the drug showed it was effective in cutting the risk of hospitalization or death in half for adults who were deemed at risk but not hospitalized, according to a summary released by Merck.

The Food and Drug Administration (FDA) is currently reviewing the medication for approval in the United States as the decision on whether to authorize the drug for use sits with national regulatory agencies, including the World Health Organization (WHO).

The final test results of the experimental medication haven’t yet been published, and some experts have said they’re worried about how the pill attacks the virus.

“There is a concern that this will cause long-term mutation effects, even cancer,” Dr. Shuntai Zhou, a scientist at the Swanstrom Lab at the University of North Carolina, told Barron’s.

Dr. Michael Carome, director of Public Citizen’s Health Research Group, told The Epoch Times that the concern is theoretical for now and that it’s likely that signaling of rare adverse events would only be possible with long-term trials, because premarket trials typically only involve several thousand participants.

Molnupiravir embeds itself in the virus’s genetic material and causes a high number of mutations, ultimately overwhelming it to extinction, a process known as lethal mutagenesis.

Launched in 2000, the nonprofit Bill & Melinda Gates Foundation is the United States’ largest private philanthropic foundation and one of the world’s biggest, pouring about $1.9 billion into the fight against the pandemic since 2020.