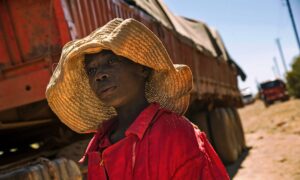 Security personnel keep watch outside the Wuhan Institute of Virology during the visit by the World Health Organization (WHO) team tasked with investigating the origins of the coronavirus disease (COVID-19), in Wuhan, Hubei Province, China, on Feb. 3, 2021. (Thomas Peter/Reuters)
Congress

Sen. Joni Ernst (R-Iowa) is introducing legislation to ensure that federal grant recipients such as the EcoHealth Alliance disclose to funding agencies whenever they, in turn, pass funds to other recipients, such as the virology lab in Wuhan, China.

“Despite skirting federal law and refusing to disclose how much U.S. taxpayer money was funneled to Communist China’s Wuhan Institute of Virology (WIV) and the details about the coronavirus research the funding supported, EcoHealth Alliance was rewarded with another $7.5 million,” Ernst said in a statement on June 15.

“Iowa taxpayers shouldn’t be forced to foot the bill for any organization that fails to comply with federal law. My bill would prevent federal funding from going to organizations, like EcoHealth, until they provide answers on how and where taxpayer dollars are being spent,” she said.

The Ernst bill is titled “Stop the Outlay of Payments Act” (STOP) and it requires funding agencies to suspend grants to recipients until they provide required information about how they spend the tax dollars they receive. The recipient would have 120 days to provide the information or materials that prompted the suspension, or the grant would be canceled.

The bill also directs the Office of Management and Budget (OMB) to maintain a publicly available list of all such suspensions.

Ernst’s bill was prompted by the refusal of the New York-based nonprofit EcoHealth Alliance to respond to a July 8, 2020, letter (pdf) it received from the National Institutes of Health (NIH) regarding grants that it then shared with the WIV. The NIH earlier in the year had suspended a grant to EcoHealth Alliance for its failure to comply with required disclosures of how the money was spent.

The WIV is the center of the controversy over how the CCP (Chinese Communist Party) virus, also known as the novel coronavirus, spread throughout China and around the globe, including to the United States, beginning in November 2019.

More than three million people have died from the virus, including more than 559,000 in the United States. The CCP has insisted that the virus originated with bats and somehow made the jump to infect other species, including humans.

But suspicions have surrounded the WIV from the beginning of the virus controversy because of concerns about the safety record of the lab, which is closely connected to the Chinese military. The fear is that the virus could have leaked from the lab to the general population in Wuhan and from there to the rest of the world.

Numerous investigations on the issue have been opened, including those by the World Health Organization, the U.S. government, and multiple private groups of experts, but the Chinese state has refused to cooperate with any of them.

There are also concerns that the virus was engineered in the lab as part of the gain-of-function research being conducted there, with much of the funding for it coming from the U.S. government via EcoHealth.

“Gain of function” refers to processes used by researchers to alter the DNA of a virus to give it additional characteristics, including greater resistance to vaccines, more rapid spread among victims, and specific symptoms they would suffer.

On June 15, Ernst released the July 2020 NIH letter, which noted that EcoHealth hadn’t responded to a previous letter and pointed out that “the NIH has received reports that the Wuhan Institute of Virology (WIV), a sub-recipient of EcoHealth Alliance under R01AI110964, has been conducting research at its facilities in China that pose serious bio-safety concerns and, as a result, create health and welfare threats to the public in China and other countries, including the United States.”

The letter further noted that the NIH had “concerns that WIV has not satisfied safety requirements under the award, and that EcoHealth Alliance has not satisfied its obligations to monitor the activities of its subrecipient to ensure compliance.”

“Moreover, as we have informed you through prior Notices of Award, this award is subject to the Transparency Act subaward and executive compensation reporting requirement” in federal law. “To date, you have not reported any subawards in the Federal Subaward Reporting System.”

Ernst noted that NIH’s new grant worth $7.5 million to EcoHealth Alliance was awarded a month after the July 2020 letter regarding the earlier suspension was sent.

“The group has collected more than $60 million in taxpayer dollars from other government agencies, including more than $5 million from the Department of Defense since July 2020,” Ernst said in a separate statement announcing that the NIH was the June recipient of her monthly “Squeal Award.”

The Iowa Republican uses the Squeal Award to highlight examples of waste, fraud, and abuse across the federal government.

Future funding of the WIV by any U.S. grant recipient would be banned by an amendment Ernst introduced and the Senate adopted in May.