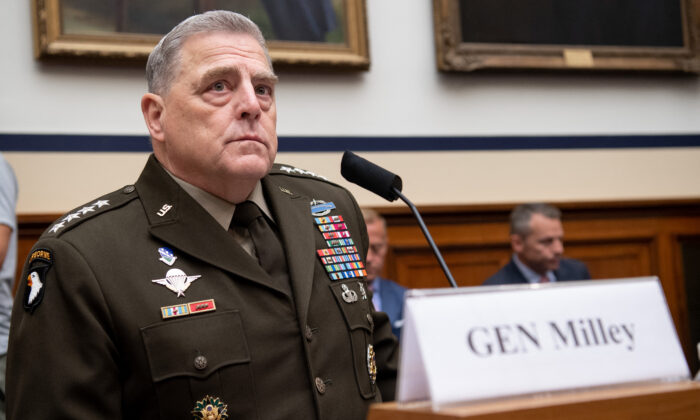 Former acting Defense Secretary Chris Miller, who briefly led the Pentagon from late 2020 until January 2021, said he did not authorize an alleged phone call between Chairman of the Joint Chiefs of Staff Gen. Mark Milley and his Chinese Communist Party counterpart.

“The Chairman of the Joint Chiefs of Staff is the highest-ranking military officer whose sole role is providing military-specific advice to the president, and by law is prohibited from exercising executive authority to command forces,” Miller said in a statement to Fox News, referring to allegations contained in a forthcoming Bob Woodward book that Milley made two secret phone calls to Gen. Li Zuocheng of the People’s Liberation Army in late October 2020 and two days after the Jan. 6 Capitol breach, respectively.

“If the reporting in Woodward’s book is accurate, it represents a disgraceful and unprecedented act of insubordination by the Nation’s top military officer,” Miller’s statement added, saying that Milley’s alleged “histrionic outbursts and unsanctioned, anti-Constitutional involvement in foreign policy prove true, he must resign immediately or be fired by the Secretary of Defense to guarantee the sanctity of the officer corps.”

When he led the Pentagon, Miller recalled that he didn’t and wouldn’t “ever authorize such conduct.”

The Woodward book, co-authored by Robert Costa, asserted that Milley became concerned that former President Donald Trump was unstable and would spark a war with China. That prompted him to arrange two secret phone calls with Li, it claimed, adding that Milley told his Chinese counterpart that the United States wouldn’t strike and said he would tell his counterpart if Trump ordered an attack.

Following publication of the alleged phone call, Milley’s spokesman, Col. Dave Butler, told news outlets that his communications with Li were part of his normal responsibilities and duties and that Milley did not break protocol in how he spoke to Li.

“All calls from the Chairman to his counterparts, including those reported, are staffed, coordinated and communicated with the Department of Defense,” Butler said.

White House press secretary Jen Psaki and other Biden administration mounted a defense of Milley, saying they believe he is still suitable to be the chairman of the Joint Chiefs of Staff.

Milley “is somebody who has fidelity to the Constitution,” she said, adding that Biden “has confidence in [Milley’s] leadership and the role he has played in his experience with him.”

Later, Pentagon spokesman John Kirby said he cannot verify the claims in Woodward’s book but added he “see[s] nothing in what I’ve read that would cause any concern.”

But Miller said that if the allegations are correct, an investigation is warranted because “a lesser ranking officer accused of such behavior would immediately be relieved of duty.”

“Any accusations that President Trump was intent on starting a war with China are completely unfounded,” Miller also said in his statement. “President Trump absolutely believed and advocated for a more aggressive approach to China, but he was elected to end our Nation’s wars, not start new ones. I was proud to play a small role in achieving those goals.”

The Department of Defense hadn’t responded to a request for comment as of this article’s publication.