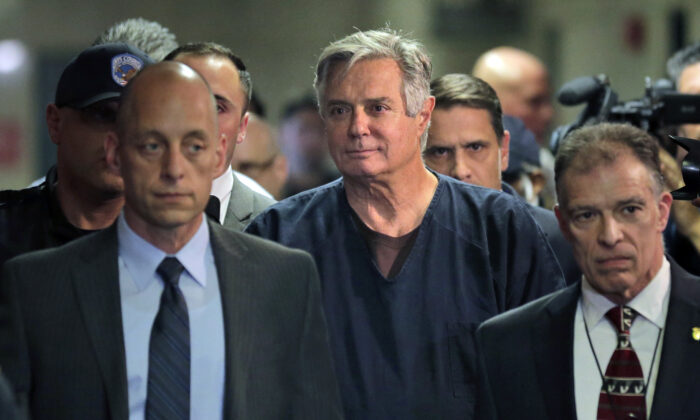 Manafort, 71, is one of thousands of federal prisoners who have been shifted to home confinement as federal officials try to blunt the spread of the CCP (Chinese Communist Party) virus.

Kevin Downing, Manafort’s lawyer, told news outlets that his client requested the release because the virus, which has a far higher mortality rate among the elderly, poses a threat to his health. In a letter sent to prison officials last month, Manafort’s lawyers said their client takes 11 prescription medications on a daily basis, including eight relevant to the requested release.

“It is only a matter of time before the infection spreads to staff and inmates at FCI Loretto, at which time it may be too late to prevent high-risk inmates, such as Mr. Manafort, from contracting the potentially deadly virus,” they wrote.

Manafort was hospitalized late last year for an incident described as a “cardiac event.”

He will serve the rest of his sentence at home, Downing said Wednesday.

U.S. law permits the release of federal prisoners to supervised release of probation if a judge finds “extraordinary and compelling reasons,” or the prisoner is older than 70, has served at least three decades, and the Bureau of Prisons has determined the prisoner is not a danger to the safety of another person or the community.

Attorney General William Barr said in a memo in March that prison officials should move to increase the number of prisoners placed on home confinement.

Criminals should only be granted such release if they’re incarcerated for nonviolent crimes, pose a minimal risk of recidivism, and might be safer serving their sentences at home rather than in prison.

Factors weighed when considering releasing prisoners to home confinement, according to the memo, includes the age and vulnerability of the prisoner to COVID-19, the disease caused by the CCP virus; the security level of the facility where the prisoner is held; and the prisoner’s conduct in prison.

The Bureau of Prisons didn’t immediately return a request for comment.

Manafort was sentenced to 47 months in prison in March 2019 for tax and bank fraud and another 43 months about a week later for money laundering, unregistered lobbying, and attempted witness tampering.

Both convictions stem from indictments by the office of special counsel Robert Mueller, who was appointed in mid-2017 to probe Russian interference in the 2016 U.S. elections as well as allegations that the Trump campaign colluded with such interference.

Mueller indicted dozens of Russians, Manafort, and several others, but his team’s final report did not establish collusion between Trump or his campaign and Russian actors.

Manafort worked as Trump’s campaign manager for less than two months in 2016.