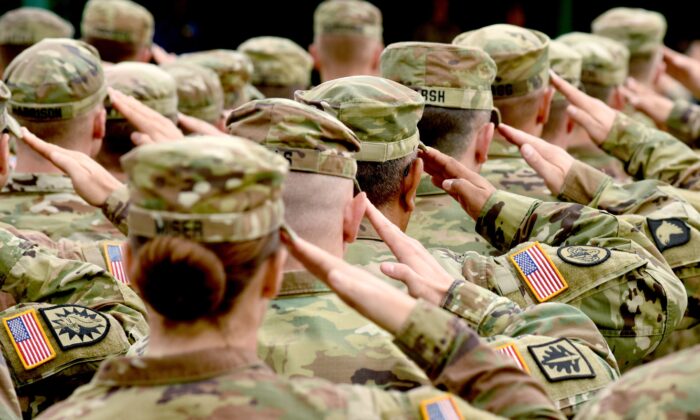 Former Secretary of Defense Mark Esper has issued a warning that the U.S. military is “slowly dying” due to poor recruitment, which puts Americans “in danger.”

“The armed services are struggling to meet their recruiting goals like rarely before,” Esper wrote in article published by Fox News on Sept. 19.

“The Army is the most affected, projected to fall short by up to 15,000 soldiers, with a larger deficit expected next year. Experts point to a variety of reasons, such as insufficient pay and benefits, a difficult work-life environment, ‘culture war’ issues, COVID-19, and a strong job market.”

While Esper didn’t elaborate on the “culture war” issues, some experts and armed service members have blamed the military’s left-wing lurch in recent years.

One active-duty Army soldier, who asked to remain anonymous, fearing reprisals, told The Epoch Times last month that the military leaders “happily encourage mandated vaccines, back the transgender issue, and speak out in opposition to the Supreme Court of the United States in regard to Roe v. Wade—all of which are very political.”

Outside those issues, Esper noted that the pool of individuals between the ages of 17 and 24 who are interested in joining or are qualified to join the military has progressively shrunk.

“When I was secretary of the Army in 2018, 71 percent of these 34 million young people could not meet the military’s entry requirements due mostly to obesity, drug use, physical and mental health problems, and criminal misconduct,” he wrote. “Four years later, that number is even higher.

“Further, of the 23 percent eligible to serve today, another 10 percent don’t meet the military’s academic standards. Worse, of the 3.5 million young Americans remaining, only 9 percent (~320,000) have a proclivity to serve.

“A nation of 332 million people should do better than that.”

Although Esper didn’t mention the military’s policies, including mandatory COVID-19 vaccines, or why they may drive more conservative recruits away, he said the president and Congress need to “educate and inspire our youth by addressing their concerns, extolling the virtues of military service, and discussing the benefits and opportunities that come with answering the call to duty.”

“They should also seek the assistance of sports figures, entertainers, and others who are influential with America’s youth. A message along the lines of ‘be healthy, keep fit, avoid trouble, and consider serving your country in uniform’ would be a solid start,” Esper wrote.

In the article, Esper didn’t call for increasing benefits or pay for members of the armed service. Under the Trump administration, in which Esper served, the military handed down its biggest pay increase in about a decade.

His opinion article comes as nearly 50 Republican lawmakers have called on the Department of Defense to scrap the 2021 vaccine mandate for military members.

Those lawmakers, led by Rep. Mike Johnson (R-La.), expressed concerns that the mandate would drive away recruits and reenlistment.

“As a result of [the] mandate, eight percent of the Army’s approximately 1 million soldiers face expulsion, Army recruiters cannot meet their FY22 target, and the Army has cut its projected FY23 end-strength by 12,000 soldiers,” the GOP lawmakers wrote in a letter dated Sept. 15.

About a week ago, the U.S. Marine Corps issued a directive to roll back some of its strict punishments for Marines who refused to get the vaccine after a court ruling that temporarily blocked the rule. A spokesperson later suggested the Marine Corps could still penalize individuals who have refused to get the shot if the recent court order is vacated.