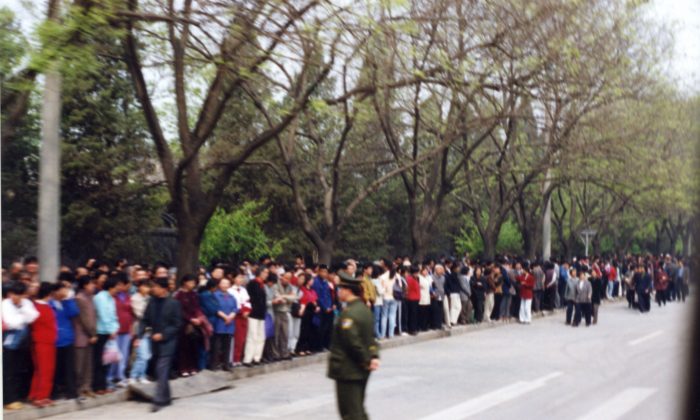 Falun Gong practitioners gathered near Zhongnanhai to peacefully appeal for their freedom of belief, on April 25, 1999. (Photo courtesy of Minghui.org)
Australia

This year marks the 22nd anniversary of the April 25 appeal, the largest peaceful appeal in China since the Tiananmen Square protests in 1989.

On April 25, 1999, more than 10,000 Falun Gong practitioners gathered outside the Appeals Office of the State Council in Beijing to ask for the release of fellow practitioners who had been wrongly arrested and beaten by police in the city of Tianjin, according to Faluninfo.net.

The arrests in Tianjin came after three years of intense official oppression, in which Falun Gong books were banned from publication, an article smearing Falun Gong had been published in a major state-run newspaper, and the police had begun disrupting group exercise sessions in parks.

During the silent and peaceful gathering, the premier of the Chinese Communist Party (CCP) at the time, Zhu Rongji, won international acclaim for peacefully responding to the demonstrators by engaging in dialogue with them.

However, this changed overnight when Jiang Zemin, leader of the CCP at the time, overthrew Zhu’s decision and initiated what has become one of the longest-running persecutions against people of faith in China.

Since July 20, 1999, many thousands of Falun Gong practitioners have been arrested, thrown into labor camps, beaten, tortured, and killed for their organs by the CCP. The true number is hard to verify, given the CCP’s suppression of information.

Li Yuanhua, a former professor at China’s Capital Normal University who now resides in Sydney, Australia, attended the April 25 gathering after hearing about the arrest of practitioners in Tianjin from his mother. She asked him to accompany her to the National Public Complaints and Proposals Administration, which was only a few kilometers from their home.

“The purpose of us going there was quite simple,” Li said. “Because I had benefited [from the practice] myself … I wanted to tell the government the positive changes that I experienced, physically, spiritually—all aspects … to tell them that this is a good practice. That’s all.”

Li told The Epoch Times that what sticks with him from that historic day was the peacefulness and the calmness with which those who gathered conducted themselves.

He said the Falun Gong practitioners showed care for others by proactively occupying only a quarter of the footpath and making sure they didn’t leave any litter behind.

“I remember there was one practitioner holding a plastic bag and walking to others one by one, asking if they had any trash to throw away,” Li said.

“Before the afternoon, we learned that the premier had come out and asked some practitioners [to come] in, to learn about the situation. There were practitioners giving us live updates all the time, so everyone was waiting for the result.

“At around 8 or 9 p.m., someone came out and told us that the practitioners in Tianjin had been released, so everybody went home.”

Li also noted that the police attending the gathering were relaxed, and there had been no threat of aggression on either side. Some demonstrators had even brought their young children and infants with them to the gathering.

“The policemen were scattered around. They were quite relaxed, smoking and chatting. You can see from the policemen’s reactions that these people [the demonstrators] were kind and didn’t mean to attack,” Li said. “Who would besiege you holding a baby?”

He said that what stood out most was the discipline of the crowd.

“The footage itself [shows this]. So many people went there to report the situation, yet they could remain quiet and not be noisy. It made people wonder what was behind them that made them behave so well,” he said.

“But Jiang Zemin was actually afraid of the discipline of this group. Bad people are really afraid to see good people. If he were a wise monarch, he would have been pleased to see his people behaving with such dignity, but the CCP is a party that stole its power and rules people through violence.”

Li said that under Jiang, the Party soon began to recharacterize the appeal as something aggressive, as the leader of the CCP stepped up his attack on people of faith in China.

“It’s after the persecution started that [the narrative] changed and [the CCP] called it ‘besieging Zhongnanhai.’”

Li noted that the term “besieging” made no sense.

“We didn’t surround it, first of all, so how could we besiege them? The CCP couldn’t find a single photo of us ‘besieging’ the place,” he said.

Recovery From a Terminal Disease

Li has felt inspired to speak up for his fellow practitioners who were imprisoned because he had benefited greatly from the practice and its moral guidance.

He first started practicing Falun Gong in 1994, after spending a decade looking for ways to cure his hepatitis B, an incurable condition at the time in China.

He had tried all kinds of treatments, including traditional Chinese medicine, Western medicine, some folk methods, and qigong practices, but he found that nothing improved his condition.

“For 10 years, I was basically [fighting with] this disease and the impact it brought upon me, both physically and psychologically,” Li said. “I felt slow and sluggish inside.

“Sometimes I would wake up in the middle of the night and just sit there, unable to go back to sleep, fearing that I may die.

“And I dared not go on dates, because the disease is contagious.”

After he began practicing Falun Gong, Li said his discomfort began to go away, and he was able to move forward with his life. He said the next time he went for a physical exam, before coming to Australia in 2006, all his medical results came back normal.

But he said his biggest benefit was the mental changes the practice brought him.

“The change in my mind was fundamental,” the former professor said. “After cultivating, I knew how to be a good person and a good teacher.”

At that time, the university that employed Li asked students to rate their lecturers anonymously, which put the lecturers under a lot of pressure. Some chose to let students pass regardless of merit, hoping to receive good reviews. Li decided not to do that. Instead, he guided the students using moral principles, such as patiently explaining why plagiarism wasn’t going to serve them.

“Students know if you really care about their improvement, [and] they’ll give you kind feedback,” Li said.

He also found that the teachings of the practice, which emphasize truthfulness, compassion, and forbearance, helped him professionally.

A professor of historical education, Li taught his students about the teachings of Confucius, Mencius, and Zhu Xi, which involved discussions on how to conduct oneself.

Previously, he hadn’t really understood the essence of their teachings and simply echoed what the books said. But after starting Falun Dafa and reading the lectures given by its founder, Li Hongzhi, he recognized that the ancient teachers were also talking about self-improvement through morality.

Continuing to Speak Out

“It will be very precious in both Chinese and world history. No matter how unfairly [Falun Gong practitioners] have been treated, this group of people has responded with kindness. They just tell you the facts, and they hope you can understand what’s going on in China after hearing them,” he said.

This is despite facing persecution, torture, and human rights abuses such as organ harvesting, all of which have forced many Chinese people of faith away from their homes and into exile in other countries, he said. “What is most touching to me is the peace and rationality shown [by Falun Gong practitioners] under the violent rule of the CCP,” he said.