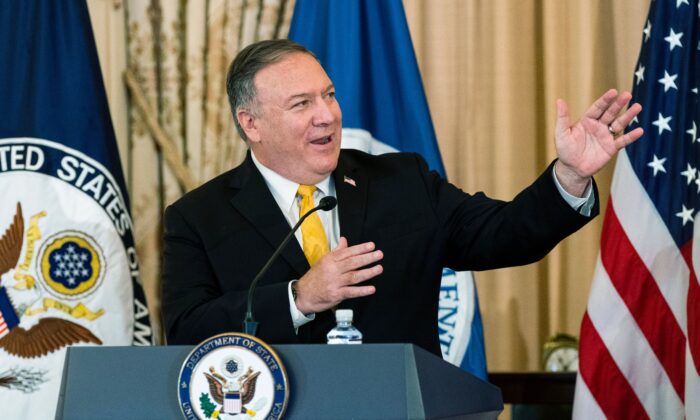 Secretary of State Mike Pompeo speaks during a naturalization ceremony hosted by the USCIS at the State Department in Washington, on Oct. 22, 2020. (Manuel Balce Ceneta/POOL/AFP via Getty Images)
US-China Relations

The U.S. State Department on Dec. 7 renamed China to a blacklist of religious freedom violators, joining nine other countries with a poor human rights record.

The ten nations, which include Burma, Eritrea, Iran, North Korea, Nigeria, Saudi Arabia, and Tajikistan, were designated as “Countries of Particular Concern” by Secretary of State Mike Pompeo, in accordance with the International Religious Freedom Act (IRFA) of 1998.

These countries were found to have engaged in or tolerated “systematic, ongoing, egregious violations of religious freedom,” according to a State Department statement.

“The United States will continue to work tirelessly to end religiously motivated abuses and persecution around the world, and to help ensure that each person, everywhere, at all times, has the right to live according to the dictates of conscience,” Pompeo stated.

According to the State Department website, “egregious violations” include “torture, degrading treatment or punishment, prolonged detention without charges, abduction or clandestine detention, or other flagrant denial of the right to life, liberty, or the security of persons.”

Congress is notified of the annual designations and could impose non-economic and economic measures to pressure these countries to end their behaviors that violate religious freedom.

Earlier in April, the U.S. Commission on International Religious Freedom (USCIRF), an independent, bipartisan federal commission created under the IRFA, recommended 14 countries, including China, to be given the designation.

“There is no question that China is the world’s foremost violator of human rights and religious freedom. It cannot be compared to any other country in the world not only because of its inexcusable actions, but because of the way it aids and abets similar actions by other countries all around the world,” stated USCIRF Commissioner Johnnie Moore in the agency’s 2020 annual report.

Between 900,000 and 1.8 million Muslim ethnic minorities, including Uyghurs, have been detained in more than 1,300 concentration camps in China’s far-western region of Xinjiang, according to the report. Also, thousands of adherents of Falun Gong were arrested in 2019 for doing meditation exercises or “distributing literature about their beliefs.”

The Chinese regime started its persecution of the spiritual practice Falun Gong, also known as Falun Dafa, in July 1999, out of fear of its growing popularity. There were 70 million to 100 million adherents by 1999, according to state estimates at the time. Millions have been detained inside prisons, labor camps, and other facilities, with hundreds of thousands tortured while incarcerated, according to the Falun Dafa Information Center.

Pompeo also placed “Comoros, Cuba, Nicaragua, and Russia on a Special Watch List for governments that have engaged in or tolerated ‘severe violations of religious freedom,’” according to the statement.