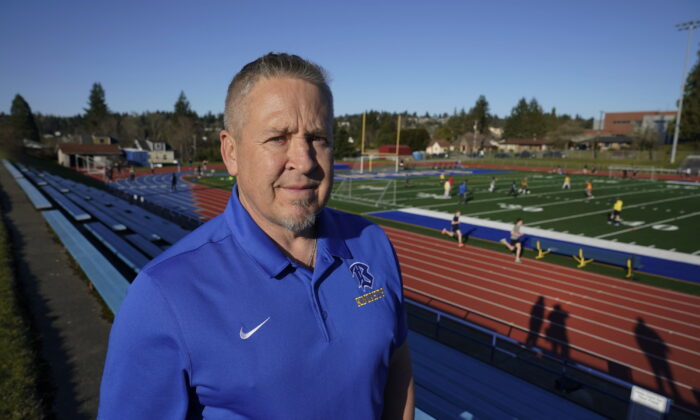 The U.S. Supreme Court has begun deliberating a case involving a former high school assistant football coach from Washington state which will impact how religious liberty is defined in public schools and beyond.

Kennedy was fired from his job for praying after games, something he says he did alone while sometimes students would voluntarily join him.

Richards said the case is a clear violation of Kennedy’s First Amendment rights and shows a growing trend of hostility toward religion.

“And, frankly, my own view is that we’ve moved way past the actual guarantees and promises of the First Amendment to explicit hostility toward religion in the public square,” Richards told the host of NTD Capitol Report, Steve Lance in a recent interview.

A former U.S. Marine, Kennedy said he made a pledge to God, as a Christian that he was going to pray by himself after every football game.

“…Every Friday night, every Monday I was out on the football field after the game, taking the knee as an American, as a Marine, as a coach, you know, a believer. I’m not going to turn my back on my faith just because it becomes uncomfortable,” Kennedy said during a recent interview with Epoch Time Crossroads.

The full interview with coach Kennedy will air on April 29 at 7:30 PM ET.

Richards said: “So, there’s really not in any way disruptive, and clearly not a government endorsement of religion, but the school district in Bremerton, Washington decided, well, this is too much of an explicit display of religion.”

The school district argues that when Kennedy prayed midfield after games, he was viewed by onlookers as a coach who was serving as a mentor and role model.

In this theory of the case, Kennedy was acting as a government employee at that moment, which means that he was engaging in speech that constituted government speech that isn’t protected by the First Amendment.

He said Kennedy’s case shows that there is, “essentially a hostility to any public display of religious belief no matter how voluntary and so I think the supreme court recognizes that that is that’s a dangerous bridge to cross.”

First Liberty has one of America’s top litigators on its team to argue the Kennedy case before the SC, Paul Clement.

Richards thinks Kennedy’s team has a good chance of winning their case at the Supreme Court, even though Kennedy lost at all the lower courts, over the last eight years.

Richards thinks the case is a clear-cut violation of Kennedy’s First Amendment rights, because the coach was not coercing anyone to join him in his silent prayer and doing it after the game, yet was still fired, because of the hostility toward religion.

“And so, I think the Supreme Court is noticing this trend, and I’m really hopeful that they will help restore the original constitutional balance in which we don’t prohibit the free exercise of religion in the course of avoiding an establishment of religion.”