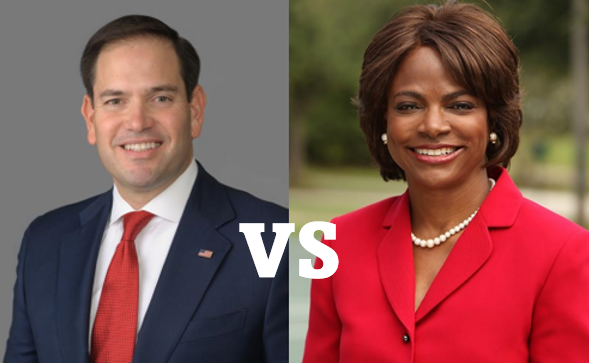 In what is anticipated to be one of the most contentious, closely watched, and most expensive Senate midterm election matchups, incumbent Sen. Marco Rubio (R-Fla.) will face Rep. Val Demings (D-Fla.) in Florida’s 2022 general election. Florida’s primary is scheduled for Aug. 23 and the general election on Nov. 8, 2022.

Marco Rubio is currently serving as a United States Senator for the State of Florida.

Rubio was born in Miami, Florida, one of the four children of Cuban immigrants who came to America in 1956. He began his political career as a city commissioner for West Miami before being elected to the Florida House of Representatives (2000 to 2008) where he served as speaker in November 2006. Rubio was first elected to the United States Senate in 2010, filling the seat left by retiring Republican incumbent Mel Martinez. In the general election, Rubio defeated Democrat Kendrick Meek and Gov. Charlie Crist (a Republican turned independent).

In April 2015, Rubio announced his bid for president of the United States, saying he would not seek reelection to his Senate seat in 2016. However, as candidate Donald Trump took a decisive lead in the polls, Rubio dropped out of the presidential election in March 2016. In June 2016, he announced he would seek reelection to his Senate seat, which he won with 52 percent of the vote.

Wants to end the Department of Education.

In July 2021, Rubio, Mike Braun (R-Ind.), and Joni Ernst (R-Iowa) introduced the Protecting Students From Racial Hostility Act (pdf), which would direct the U.S. Department of Education’s Office of Civil Rights (OCR) to investigate parent and/or student complaints against the use of curriculum such as critical race theory.

Favors a ban on abortion after 20 weeks.

Supports a balance of both a market-driven economy while also creating national priorities for industries and support for them.

Believes climate change is a reality but not man-made.

Opposes restrictions on the right to bear arms and believes the Second Amendment is a cornerstone of American democracy.

Favors bans on ban bump stocks and additional background checks. He said limiting magazine size would have saved lives in the Parkland shooting, but voted NO on banning high-capacity magazines of over 10 bullets.

Opposes amnesty for illegal aliens in any form.

Voted against the Paycheck Fairness Act (equal pay for women).

During a June 9, 2021 interview conducted at his desk in the Russell Senate Office Building, Rubio attacked Demings’s voting record and labeled her as a “do nothing Democrat.” The Senate Ethics Committee Manual (pdf) explicitly states, “Senate space may not be used for any political campaign.”

Val Demings is currently a member of the U.S. House, representing Florida’s 10th Congressional District. She assumed office on Jan. 3, 2017, and her current term ends on Jan. 3, 2023.

Demings was born in 1957 in Jacksonville, Florida. She received a bachelor’s in criminology from Florida State University and a master’s in public administration from Webster University. After graduating from college, Demings became a social worker. In the early 1980s, Demings graduated from a police academy and joined the Orlando Police Department where she served for nearly three decades. From 2007 to 2012, she served as Orlando’s first female chief of police.

Demings was first elected to the U.S. House, representing Florida’s 10th Congressional District, in 2016. During her time in Congress, Demings has served on the Committee on Homeland Security and the Committee on Oversight and Government Reform. In 2020, Demings was named one of seven impeachment managers in the U.S. Senate trial against President Donald Trump.

Subcommittee on Intelligence Modernization and Readiness

U.S. House Committee on the Judiciary

Voted against an amendment that would prohibit federal funds from being used for abortions.

Voted against a bill that would require Congress to pass a balanced budget.

Believes “climate change is real, it’s dangerous, and we need to do something about it.” Also believes extreme weather is caused by climate change.

Supports restrictions on the right to bear arms.

Demings was one of eight Florida House Democrats who introduced an omnibus gun control bill in May 2021 aimed at “ghost guns,” “concealable assault rifles,” bump stocks, and background checks.

In 2009, then Orlando Police Chief Val Demings received a “written censure” as punishment for not properly securing her gun in her car after someone broke into her Chevy Tahoe on the night of Feb. 27 and stole a duffel bag she had placed on the floor of the vehicle. The bag contained her agency-issued 9mm Sig Sauer gun and ammunition.

Opposes requiring illegals to return to their country of origin.

In 2021, Demings was among a group of Democrats who proposed adding an immigration reform measure to the $1.9 trillion social spending bill passed by the House that would include a pathway to citizenship for Temporary Protected Status immigrants.

In February, the bipartisan House Communications Standard Commission opened an investigation following a complaint that Demings allegedly misused campaign funds when she sent a 12-page, campaign-style mailer to Floridians outside her district. However, Democratic leadership in the House has now shut down the investigation.

Real Clear Politics shows Rubio has a comfortable lead of +9 in a polling average as of March 10.